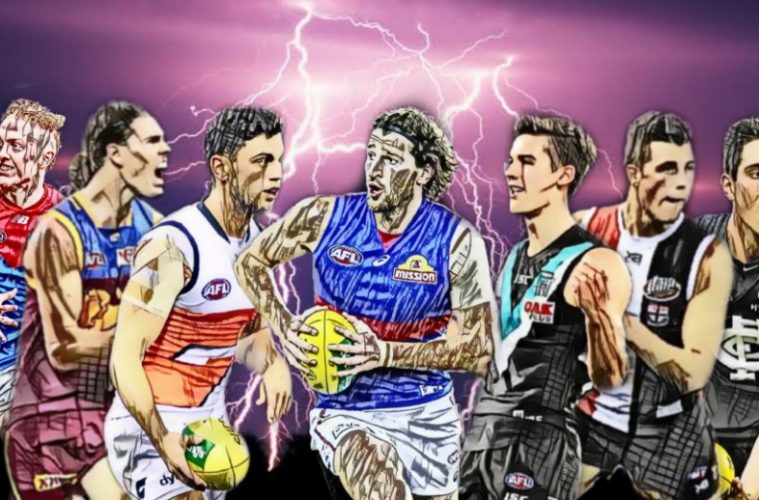 The year is 2025 and the All-Australian team is about to be released… can you pick it?

I know it seems a long way off, but at one point, so was the year 2020. Remember Kevin Rudd’s 2020 summit? At that point he was looking years into the future and inviting those who he perceived as the best and brightest in the country to submit their ideas to shape our nation right now.

And didn’t that turn out well!

Look, I’m sure one or two ideas that came out of that summit (conducted in 2008 for those interested, with a view to shaping the country in 2020) and someone maybe even followed through on them. I’m also sure Cate Blanchett was invited for her intellectual capacity and not just because she was famous.

But in this exercise, I’m hoping we can have something a little closer to the mark than throwing wild ideas around in the hope that someone thinks I’m smart. I’m a realist – I know you won’t think that.

Anyway, we are working in a much tighter timeframe, with just five years to cover before this team is selected. Hell, maybe even Cate Blanchett could get a few right!

So, here goes – given what we’ve seen to date from the players in the league, and the expected decline of those currently in the spotlight, here’s what I came up with for the projected 2025 All-Australian Team. I know this is crystal ball stuff, and I know opinions will vary wildly, but it’s a bit of fun. Throw your team out there if you like… I’ll be gentle.

Please bear in mind that unless stated, we’re assuming these blokes get a clean run at it over the next few years.

Harris Andrews has already scaled the AA mountain, and currently sits atop as the reigning full back. Over the next five years, you’d be a brave man to claim he’ll miss more selections than he’ll receive.

Weitering is building nicely, and if I were a betting man, I’d have money on him to be the breakout defender of 2020.

And Sam Taylor is serving an apprenticeship under two of the best, in Nick Haynes and Phil Davis. He is currently 21, so should be right about in his prime as we name this team.

I love the way Jordan Clark plays the game, and he has shown plenty off half-back, and running up onto the wing. He will be 24-25 by the time this team is named. Right now…. God help him – he’s only 19.

Darcy Moore could very well be challenging Jeremy McGovern right now for the AA centre-half-back spot, but for a succession of injuries. If he gets his body right, he’ll be late 20s at this stage, and could have a couple of AA blazers to his name.

And Callum Mills looks like the poised half-back flanker every team needs. He narrowly beat out teammate, Jordan Dawson for this spot, but that could really go either way.

In 2025, Patrick Cripps will have just turned 30. His style of game is like that of Josh Kennedy (Sydney) and if he can get help now, it will ease the pressure on his body and allow him to remain at the top of the AFL heap for the next five seasons. He could be a seven, or eight-time All-Australian eventually.

Speaking of help for Cripps, the arrival of Sam Walsh at Carlton has been a godsend. His style complements Cripps perfectly, and if he sharpens up his delivery, many AA berths await.

Hugh McCluggage is ready right now. If he doesn’t have a couple of AA selections to his name by the time 2025 rolls around, something is very wrong.

Rozee is already one of my favourite players to watch, and will usurp the role of Robbie Gray as the permanent half-forward flanker. This will not be his first selection.

I’m backing Eric Hipwood to take a giant leap in the next two years and start marking the footy more often. When he hits the ground running, he is surprisingly agile for a big bloke – he just needs to start clunking a few more.

And Tom Papley will be just 28 by the time this team rolls around. Depending on whether the selectors are trying to shoe-horn another mid in, he and Rozee might duel for the other HFF spot.

Charlie Cameron could join Paddy Cripps as one of the elder statesmen on this team by 2025. In his 30s, he will no doubt see younger challengers to his role of specialist small forward, but right now, who can you see beating him out of this position? Give yourself a pat on the back if you said “Dylan Grimes”. Seriously, though, maybe Jaidyn Stephenson?

Aaron Naughton has already shown what he is capable of. As his consistency becomes better, I expect to see his name up toward the top of the contested marking rankings every week. Beats out Jordan de Goey for this spot… just.

Hey, where’s Brodie Grundy? He’s been surpassed now by Rowan Marshall.  Grundy will be 31, and whilst still a huge force, will be coming to the end of his prime. Marshall will be 29, and still in his.

Clayton Oliver is the most underrated young mid in the game. One of just three men to ever collect 400 contested touches in a season, his immense ability cannot be denied. Oh, and he’ll be 27 in 2025… scary, huh?

The Bont should be in, or at the end of his prime by this stage, and may have a few awards to his name. If fit, he will become an automatic selection over the next 4-5 years, and 2025 will be no exception.

Hey Bomber fans… you think I forgot you? Andrew McGrath is starting to show all the signs you’d want to see from a young star. Fast forward five years, and the bloke will be your best player.

Tim Taranto is a B&F winner at GWS, and could easily displace any of those named on the field. He, like Clayton Oliver, will be just 27 years old when 2025 rolls around.

Isaac Heeney will have made a couple of these teams by this stage, and will only be on the bench here due to being used in multiple roles… particularly if John Longmire is in charge! Plonk him forward permanently, John… he’s a match-winner.

And finally, Bailey Smith bumps out teammate, Josh Dunkley to make the side. I like Dunkley, but love what Smith has produced so early in his career. It was a coin toss.

Members – Round One Defensive Player Rankings

Others I had in contention

Jacob Hopper (GWS) – might end up going past a contested ball winner, or two in the starting 22.

Jordan Dawson (Sydney) – Preferred at half-back. Could knock Mills off his perch.

Harry McKay (Carlton) – Not sure he couldn’t hold down centre-half-forward, but his kicking for goal… ewwww.

Dan Houston (Port Adelaide) – Really moved into contention in 2019. Will be 28, and could be Port’s second-best player by this stage (behind Rozee).

James Worpel (Hawthorn) – Already a B&F winner, will be interesting to see how he goes alongside Tom Mitchell.

Charlie Curnow (Carlton) – The next 12 months dictates his football future. Given the last 12… I’m not all that confident.

Brayden Fiorini (Gold Coast) – Underrated as hell. Picked up a heap of the ball in a poor team in 2019. Name gets lost amid the King/Lukosius/Rowell/Anderson signings, but he is a star.

Josh Dunkley (Western Bulldogs) – I went for Bailey Smith over him, though that may come back to bite me.

Jack Macrae – Right now, you could almost have all of Bont/Dunkley/Macrae in the AA team. I can’t see that always being the case with kids coming through. He is what I’d term ‘collateral damage’ of fitting a lot of great players into one team in 2025. Yeah… that’ll do.

Charlie Ballard (Gold Coast) – Showed plenty in defence, despite being outmatched at times. Will be a very good player.

Willie Rioli – If he gets this ban sorted, gets back to playing footy… he is capable of anything.

Jaidyn Stephenson (Collingwood) – Could very well be a 3-4 time AA selection. Converts opportunities and will be just 26 at this point.

Nick Blakey (Sydney) – A lot will depend where he plays. As a half-forward, would be a brutal match up as he gets stronger.

Sydney Stack (Richmond)  – A bit more of a long shot, but will be just 25 at this point and a HBF position looks likely.

Mitch Lewis (Hawthorn) – Has a great pair of hands, but I want to see him stand up and be the best forward on the park… and I haven’t seen that just yet.

Cam Zurhaar (North Melbourne) – If I was picking a personal team, he’d be one of the first I’d snare. Hard and fierce at the footy and player. Love it.

Darcy Fogarty (Adelaide) – Small sample size as a forward, but I love what I have seen from him.

Oscar Allen (West Coast) – Playing behind Kennedy and Darling, but opportunity will open up in the next couple of seasons. Looks very promising.

Jade Gresham (St Kilda) – Strong contender for a half-forward role. Will be right in his prime at this stage.

Wayne Milera (Adelaide) – Could contend for a HBF position by this stage. Knows how to find it, and at 27, will be right in the middle of his best seasons.

Darcy Parish (Essendon) – Has shown glimpses, but needs consistency. At 27, will be a tough match-up at this point.

Tim English (Western Bulldogs) – He is considered on the proviso that the beatdowns he is suffering now do not scar him, mentally.

Dougal Howard (St Kilda) – Needs to play as a defender, and recapture early-career form, but the potential is definitely there.

Nick Larkey (North Melbourne) – Great contested mark and really surprised as the second tall for North. Could become their number one forward.

Tom Doedee (Adelaide) – One of my faves – needs a clean run for a season or two, but a potential AA centre-half-back.

Jordan de Goey (Collingwood) – Could be anything, but I am not sure he takes it seriously. Maybe that’s not a completely bad thing?

Of course, there are plenty that will be in consideration that we haven’t even see play yet. A draft pick might jump out of the box and take the footy world by storm, Sam Walsh/Chris Judd style, or the organic improvement in a second or third year player may thrust their name into the spotlight.