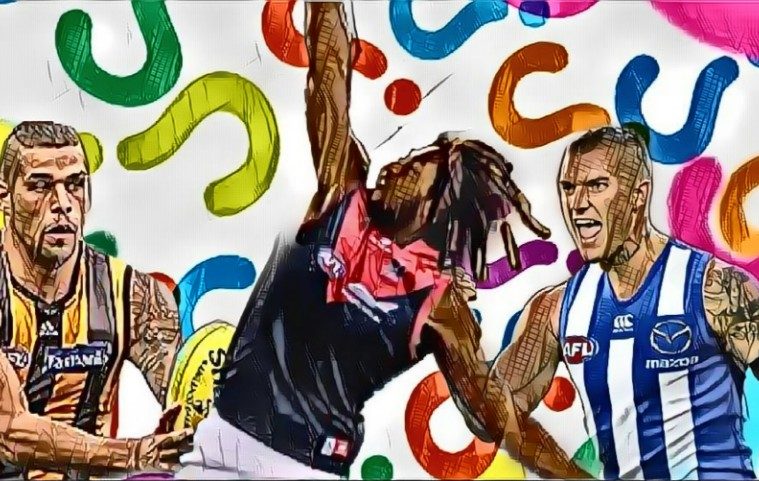 Every club, player, coach and fan has a moment, game, trade or draft pick they replay in their minds constantly and rue more than anything else in the world. I’m sure we all have something in our lives similar – a missed opportunity, a chance at love we let slip past, the job we should have taken… something that eats away at you and drives you mad. It leaves you feeling trapped in a prison with no escape and all that’s left for you to do is reminisce on what could have been.

Seeing as the entire globe seems to be trapped at the moment, what could be more appropriate than a trip down memory lane? Sure it might be painful for some, but it’ll only serve to make the eventual return of footy sweeter.

Just a quick disclaimer, these ‘biggest what ifs’ have all been hand-selected by me and selfishly, are the questions I want answered most. So yes, you might disagree with some and think I’ve missed something huge that should be in its place and that’s fine. You might even drop a ‘how could you not say (blank) is the biggest ‘what if’ for that club? It basically changed the course of its entire history’ in the comments. But as I said, I’ve been selfish here and gone for the ones that most interest me and hopefully, they’ll interest you too. With that in mind, let’s dive into every AFL clubs biggest ‘what if’ of the last 20 years or so – Part Two.

Oh, you missed Part One? Here you go…

From 2007 until 2011 Geelong had the premier AFL side in the competition. The only thing that truly put an end to the all-time great side’s dominance, was an all-time great Hawthorn outfit. Throughout its five year reign, Geelong won three premierships, a conversion rate that would satisfy any club during its premiership window.

The pedigree of this Cat’s squad can’t be questioned; Ablett, Ling, Johnson, Bartel, Selwood and Chapman were among its star players, which tells you all you need to know. However, this squad should have won more than its three flags over its half a decade long run and one year, in particular, the Cats dropped what should have been a sitter.

I mean no disrespect to a quality Hawthorn side that had the building blocks of what would become another all-time great side, but the Cat’s threw 2008 away. Inaccurate kicking, letting Rioli off the leash and some Stewie Dew magic sunk them. At the time, that loss cost the club back-to-back flags, but in hindsight, it probably cost Geelong a three-peat, four flags in five years and a spot on the mantle as footy’s greatest side of the modern era.

Unfortunately for Geelong, Hawthorn (2013-15) and Brisbane (2001-03) both pulled off what it couldn’t and the best side of the modern era remains a worthwhile debate without a clear answer.

This one is…harsh, I’ll admit. But there’s something to be said about the power of having a genuine fan-base – it minimises the risk of an expansion club’s failure, giving it a safety net to fall back on financially and helps the players feel as if they matter.

The Giants have proved a large fanbase isn’t 100% necessary if an expansion club can retain enough talent to compete, but gee, the Suns could have used some more fans throughout its unsuccessful AFL journey thus far.

The last thing the Suns have been since their introduction to the big league in 2011 is competitive, and much of that has come down to the fact they haven’t retained enough talent (along with some dud draft picks). A big part of failing to retain talent is a club’s culture, and a big part of a club’s culture is its fans. Fans which are sorely lacking on the Gold Coast.

However, you know where there’s culture aplenty? Tasmania.

Tassie is a state with some real football pedigree and a fanbase dying for its own club. I’m not saying had the Suns been based in Tasmania they’d have had multiple trips to the finals, but I’m saying that at least people would care. I’ll reiterate this point again – the atmosphere surrounding a club drives the players and Tasmanian fans would have done wonders for the Suns. Essentially, Tasmania deserves its own club and it shouldn’t have had to wait this long.

Quick side note – When Tassie does finally get its own club, what name would you all like it to have? Personally, I don’t mind the ‘Stingrays’, an unfortunate encounter at Wine Glass Bay taught me that stingrays are right at home in Tassie so I think it would make sense.

Maybe it’s the Giants who really should have been based in Tasmania, but they’ve actually won some games and have earned a proper ‘what if’.

This particular preliminary final was one for the ages, and it’s one of those games where the better side overall, was beaten by the better side on the day. This game was the Giants’ first real finals test and they came really close to coming out on top but fell just short. Ever since, the Giants just haven’t quite been able to get over the line in the big moments.

Perhaps unfairly, I’m ignoring the club’s preliminary final victory in 2019, purely because Collingwood lost that game far more than the Giants won it. Since 2016, I’ve always thought the killer instinct you need to win on the biggest stage has eluded them and in 2019, against Richmond in the biggest game of the season, proved me correct. The Giants just aren’t ready yet, but had 2016 gone a little differently, perhaps they’d already have a flag under their belt.

Obviously I’m taking some big leaps here because winning a grand final against Sydney in 2016 was no easy task, but as the Bulldogs showed, it was achievable. And had the big dance in 2016 been a Sydney showdown, my money would have been on the Giants.

Fox Footy recently broadcast this particular 2016 preliminary final (thanks COVID-19) and the Giants had every chance to win, jumping out to a 14-point lead early in the fourth and gaining all the momentum. Unfortunately for GWS, the Dogs were amid a crazy run of form and stormed home, stealing it from under the Giants’ noses. After dropping that game, the squad seemed to stall through 2017-18 and although 2019 was almost a fairytale – did anyone ever think they were going to roll the Tigers?

Had 2016 gone differently, who knows, maybe GWS goes on to win it all and we’re now talking about a club with some silverware in its cabinet.

For anyone concerned, this ‘what if’ isn’t going to be me harping on about how Hawthorn could have won five in a row if they’d kept Lance Franklin. Instead, I’m going in the other direction; had Buddy hung around, would the Hawks have pulled off their three-peat?

This is all purely speculation, but let’s look at some stats. In 2014, the year after Buddy’s departure, Jarryd Roughead kicked a career-high 75 goals. With more forward fifty entries directed toward him I suppose this increase was to be expected, however, both Luke Breust and Jack Gunston kicked over 50 goals for the first time in their respective careers in 2014 and both of them achieved the feat a second time in 2015. Across the board, each of Hawthorns forwards kicked more goals in the season’s after Franklin left.

Obviously Buddy left a big hole in the Hawthorn forward line which was going to be filled one way or another, but if he didn’t depart, would we have seen such growth in Hawthorns young forward line? Would it have been so devastating for so long? There’s certainly something to be said about the way the forward line adjusted to life after Buddy, excelling in all areas.

Finally, one of the most underrated acquisitions of any club in recent memory is Hawthorn’s pick-up of Ben McEvoy in 2014 from St Kilda, in exchange for the compensation picks it received when Buddy left. ‘Big Boy’ served as the side’s ruckman, in tandem with David Hale, in both 2014 and 2015 and played a significant role in the team’s overall success in those years.

McEvoy remains a valuable player for the Hawks, today and has been a stalwart of the clubs best 22 ever since he arrived from the Saints.

Perhaps Lance leaving wasn’t a good thing for the Hawks at the time, but in hindsight, things have gone pretty well – it certainly wasn’t a bad thing.

There isn’t one single ‘what if’ that accurately reflects just where the Demons have gone wrong in the last 20 years, there’s just been misery, plenty of which has been self-inflicted. So this will be a relatively short, draft-based ‘what if’ because I don’t want to spend too much time kicking a side – one I truly pity at this point – while it’s down.

With that said, what if in 2008 instead of Jack Watts, the Demons picked Nic Nat? Hurley? Ziebell? Sidebottom? Beams or Shuey?

What if in 2009, instead of taking Scully and Trengrove with picks 1 and 2, they took Dustin Martin? Or Nat Fyfe? Or perhaps even Ben Cunnington? They struck gold with Gawn in ‘09 at pick 34 but given their history, this was seemingly an accident. What if in 2012, Melbourne had picked Stringer, Macrae, or Grundy instead of…Jimmy Toumpas?! That’s just three drafts in five years, and I could go on and on and on. In fact, I just might.

Among some earlier draft flops are; Matthew Bate, Colin Sylvia, Luke Molan, Cale Morton and Lucas Cook. Don’t recognise some of those names? They were all taken pick 15 or higher from 2002-2007.

Thankfully for Melbourne fans, more recently the club has shown some signs of competency in its drafting, but it remains far from excellent.

The jury is still out on the likes of Brayshaw and Petracca, but Oliver is a clear standout. Now before anyone kicks up a fuss, I’m aware you could go through just about any clubs list of high draft picks and there would be some stinkers, however, Melbourne has clearly let some quality players slip through its fingers on draft day and the club has suffered accordingly.

The Kangaroos have had a long history of financial trouble, a lack of fans and are the first club to be mentioned whenever anyone brings up the idea of a merge. Nowadays however, it’s got some money to spend, what seems to be a positive culture, and a promising new coach. Yet it still can’t find anyone to take the cash.

The club needs to figure this out or is at risk of history repeating itself. Go back to 2014, many of you may not remember, but the Kangaroos made back-to-back preliminary finals from 2014-15, they then won the first nine games of the season in 2016 before imploding completely.

Over this timeframe, it was a one or two pieces away from being more than just a plucky side going on a fairytale run. Imagine if in these seasons an ageing Boomer and Michael Firrito weren’t the only ones putting fans in seats and drawing media attention. I almost couldn’t believe that in the past decade, in consecutive seasons, North Melbourne was one game away from playing in a Grand Final.

North Melbourne in a Grand Final doesn’t even sound real, and yet it came as close as any one club could.

Relevancy is North’s issue, and it needs to solve this problem soon because as I’ve said before, Tasmania is dying for a club and will take whatever it can get.

Thanks for reading and stay tuned for Part Three next week.