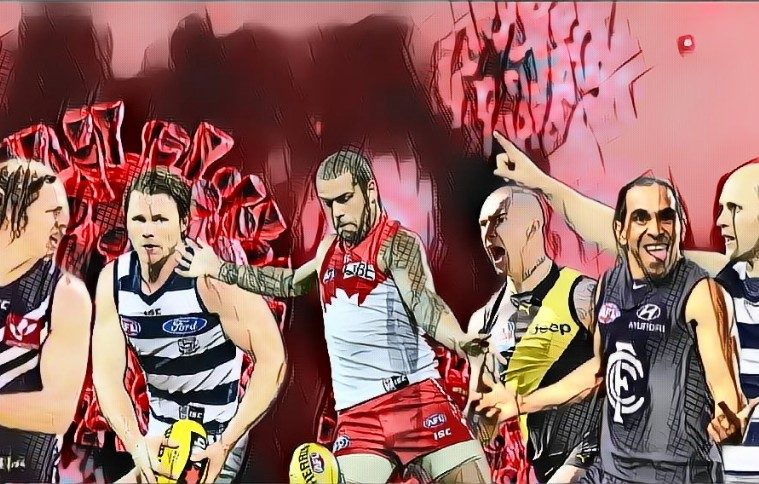 Who Is Hit Hardest By The AFL Shutdown?

Well, the short answer in relation to who is affected is “everybody”, right? People are losing jobs, or being denied the opportunity to catch up with friends, go to school or visit relatives. Sadly, some people have passed away and their families are left to make sense of a horrible situation.

I’m stuck at home, you’re stuck at home, and the missus tells me Coles and Woolies are thinking of introducing a limit of eight people at a time into their stores… Eight people? That won’t be carnage, will it?

We’re all impacted by this damn virus in one way or another, and there are much larger problems than what happens to a particular player or team in a footy season – I’m well aware of that. But we’re a footy site, and as such, we’ll be looking at the impact this virus has had on the footy landscape and those in it. So, please forgive the narrowness of scope in this article.

I read with interest a Fox Footy article yesterday featuring Brendon Gale, and he was lamenting the possibility that this compromised season may derail the Tiger Train inasmuch as the club having to make tough decisions, financially, which could change the way the club has operated. And, I suppose, what made it successful. It was an interesting take, and something I’d pondered, myself. Of course, had I floated it, I am sure some of our more vocal yellow and black readers (not a racist term) would have let me know all about it and how I was anti-Richmond, etc…

Not so – what I am is anti-no AFL. Yeah, that’s a double-negative, but let’s be honest… it’s hard to find positives at the moment.

So, I got to thinking about who else this interrupted (at best) season will affect most. There’s us – the fans. Many of us enjoy the sunshine of summer, get out and about and maybe even find some form of fitness, but we pine for the cooler weather because it brings footy with it. Now, we have one, but the other is still missing. But what about at the clubs?

We’ve all heard about the support staff – the admin people, the physios, the assistant coaches – the impact has been huge, but I want to narrow the focus on the footy-related aspect for a moment. What I would like to do is drill down on some of the players and teams who, historically, will be most impacted by what’s happened, and what’s happening.

Brendon Gale was right. This may be the thing that brings to Tigers back to the pack – having to make cutbacks in departments that were great to have, but not essential to the running of a footy club may be a little demoralising. Did anyone catch Jack Riewoldt talking about people being stood down? Genuine emotion was palpable as he spoke about friends he’d made at the club – non-playing personnel who were basically sent home. It’s the kind of thing that tears at the fabric of a footy club. But could it give other clubs in the same boat a sniff?

There were a few legitimate challengers to the throne this season – West Coast, Collingwood, and if GWS could recover from the humiliation of 2019, they were in the mix as well. However, everyone had the Tigers as the favourites to win it all.

This was a team with the ability to win three flags in four years, but how long can a team stay “up” for, particularly if cutbacks cut to the heart of the club? In recent history, we’ve seen Hawthorn and Geelong have extended runs at the top. Hawthorn made four straight Grand Finals, winning three, before the bubble burst in 2016. Geelong had a longer run of sustained success, with three flags over a five year period.

This is year four of the Tigers’ successful period. If it is a wasted season, it could be one of the things Richmond fans look back on in years to come and wonder about. If it wasn’t for that cancelled or compromised season, we could have seen them put together a dynasty that thrust them into the conversation as to which team was the all-time best. I’m not joking – another flag this season, and the Tigers were well and truly in the mix as to which team was the best of the modern era. Lions of 01-03, Hawks of 13-15, Cats of 07-11, and the Tigers of 17-20.

Was Round One the last we will ever see of Gary Ablett? How about Heath Shaw? Josh Kennedy at West Coast? Shaun Burgoyne? Kade Simpson? David Mundy? Harry Taylor? Eddie Betts?

This season was supposed to afford these players either another crack at the flag, or at the very least, a farewell tour worth watching. In Ablett, we are talking, arguably, the greatest player of the modern era. Hey, five MVP awards are pretty hard to argue against.

Some may argue that these blokes have had great careers, and if the final rounds of their fights are cut short, it’s not that big a loss, but I wanted to see them go the distance. I wanted to see them throw a few haymakers and bring their opponents to their knees one more time. They still had a fair bit to give.

We got a taste in Round One – Burgoyne shrugging tackles and slotting goals, Gaz was one of the best for the Cats, whilst Heater slotted into his regular role patrolling the Giants’ defence as they dispelled the Geelong challenge. Kennedy, on the other hand, would not want that performance to be his last.

Their best might be past them. Their tanks might not be as full as they once were, but these guys are still capable of turning it on. And we may not get to see that happen again.

Imagine having the AFL dream dropped on you? You’re drafted, you do the hard yards in the pre-season and attempt to keep up with the big boys at your new club. You feel you’ve acquitted yourself quite well and the coach pulls you aside to tell you you’re in line for a Round One debut.

How bloody great is that!

So the last couple of weeks of the pre-season see you busting your backside on the track, trying to leave no doubt in anyone’s mind you’re in the best 22. But the growing tide of calls for the season to be halted are putting the handbrake on just as you put your foot to the floor.

You run out onto the ground for your first-ever AFL game to the thunderous applause of… your family, in a private box 150 metres away. The rest of the stadium remains empty. Not exactly the stuff dreams are made of.

This year’s draft crop got a baptism of fire into the AFL, but at least those who did play got a run at it. There are some who weren’t selected who will have a long wait. Or you could be Izak Rankine, who after sitting out 2019 with injury, managed to once again injure himself in the lead up to Round One. Drafted at pick three in 2018, he is still yet to debut, and as this season suspension drags on, Rankine might go down in history as the highest pick not to debut in his first season and a half!

THOSE AT THEIR PEAK

The old blokes have their careers behind them, and the young ones still have plenty to look forward to, but what of those in, or moving into their peak right now? How does the potential of losing an entire season of football, whilst at their absolute best, impact their legacies?

Let’s look at a few.

Nat Fyfe secured his second Brownlow in 2019, and inarguably over the past five years, when he is healthy, he is in the top handful of players in the game. He had the opportunity to contend for a third Brownlow, which would have placed him in the AFL stratosphere in terms of superstars. Now, at 28, and at the age where he should be at his peak, he sits out.

Dustin Martin is on the cusp of being counted as one of the greatest players of all time – perhaps he’s already there. Riding the wave of adulation after a second Norm Smith Medal, Dusty is on the precipice of immortality in AFL ranks. Imagine another season where he rips it apart? Imagine a run into September where he and his Tigers complete another year of dominance? Imagining may be all he can do in 2020, and with Dusty turning 30 next year… well, no one stays at their peak forever.

Patrick Dangerfield turns 30 this year – today actually, at time of writing, and whilst he has shown no signs of slowing down yet… the decline can happen rapidly. Not many players get better after 30 (Travis Boak and Shaun Higgins aside) and given the heights Danger has scaled, this year, and possibly next were the two years we could reasonably expect him to be at his peak. Often spoken of as the contemporary of Dustin Martin, this has the potential to be a wasted season for Danger, not only personally, but in terms of his team, and its legacy. Will he be remembered as the great player who couldn’t get his team into a Grand Final? 2019 may have been the year he silenced those doubters.

Others on the precipice of greatness – players like Toby Greene, Marcus Bontempelli, Patrick Cripps, Brodie Grundy and Charlie Cameron – all have the brakes on at the moment, and their chances to continue to build legacies of their own have been put on hold.

And then there’s Buddy.

It looked to be a foregone conclusion that Lance Franklin would kick 1000 goals in his career, didn’t it? He was chugging along nicely, looking like he had years left.

And then suddenly, he didn’t. What did I say about Dangerfield earlier – the decline can happen rapidly.

Buddy’s last couple of seasons have indicated that his body is no longer the well-oiled machine it once was (no matter how much oil he rubs on his arms!). It was starting to rust, starting to get clunky, and all of a sudden, the 56 goals he needs to hit the magical 1000 seem so far away.

Realistically, Buddy will need games this season to get the job done. Relying on him being completely healthy for the entirety of 2021 is looking more like a pipedream, and unless he gets some time on the park this season, 1000 goals might just be out of reach.

And you might just save some lives in the process. It’s a nice little bonus.

Mongrel Memberships help us stay viable. Thank you to all who have already joined. If you haven’t please consider it.