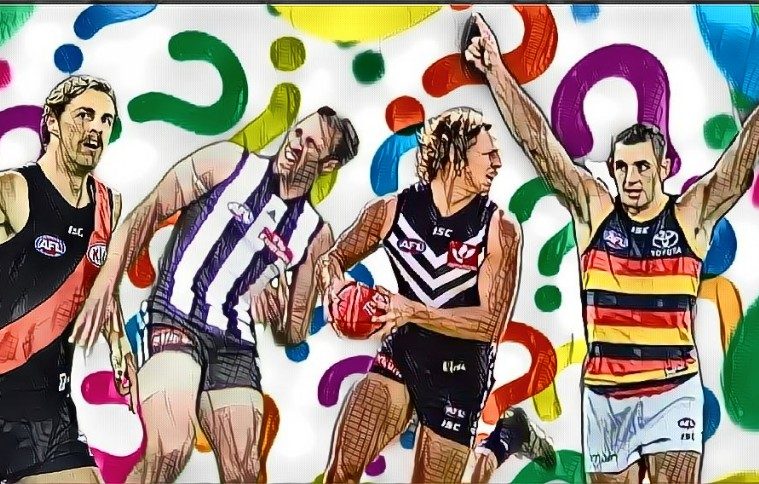 Every club, player, coach and fan has a moment, game, trade or draft pick they replay in their minds constantly and rue more than anything else in the world. I’m sure we all have something in our lives similar – a missed opportunity, a chance at love we let slip past, the job we should have taken… something that eats away at you and drives you mad. It leaves you feeling trapped in a prison with no escape and all that’s left for you to do is reminisce on what could have been.

Seeing as the entire globe seems to be trapped at the moment, what could be more appropriate than a trip down memory lane? Sure it might be painful for some, but it’ll only serve to make the eventual return of footy sweeter.

Just a quick disclaimer, these ‘biggest what ifs’ have all been hand-selected by me and selfishly, are the questions I want answered most. So yes, you might disagree with some and think I’ve missed something huge that should be in its place and that’s fine. You might even drop a ‘how could you not say (blank) is the biggest ‘what if’ for that club? It basically changed the course of its entire history’ in the comments. But as I said, I’ve been selfish here and gone for the ones that most interest me and hopefully they’ll interest you too. With that in mind, let’s dive into every AFL clubs biggest ‘what if’ of the last 20 years or so – part 1.

Be honest, all of our heads went straight there, right? Ever since the Grand Final loss to Richmond in 2017 the entire Adelaide Football Club has been a shell of its former self.

Backing up their Grand Ginal loss, the Crows finished 12th in 2018 after one of the most uninspired seasons in recent memory. The famous 2018 preseason camp hosted by ‘Collective Minds’ has its place in footy folklore and its adverse effects have haunted the club ever since. Where they are at now is hopefully on a brighter path after undergoing a major list overhaul and handing the captaincy over to Rory Sloane and out of the hands of Tex Walker.

But where could they have been had things gone their way?

It’s a guess, but I’m reasonably confident in saying that had Adelaide won the flag in 2017, its preseason would’ve been a little less…hostile. There’s a huge difference between a squad that’s gone all the way and one that fell at the last hurdle. Just look at Richmond.

Could that have been Adelaide creating what is close to a modern dynasty? Quite possibly.

The Crows had the talent to win in 2017 and much of that talent returned in 2018, but they never found their groove and it is now clear, with the benefit of hindsight, that most of the list was mentally shot. One can only wonder what the atmosphere would have been like in Round One of that 2018 season had the players been in a more positive and stable frame of mind. And what results 2018 and ’19 would have reaped with the Crows united?

Now this is a big one and you might think this it’s more suitable for the Magpies but I’ve got something else lined up for them.

We all know the kick I’m talking about. It was the 2002 Grand Final, early in the fourth term with Collingwood trailing by three-points and a potentially critical momentum swing in the hands of Anthony Rocca, 40 metres out from goal.

Go back and look at the footage – it went through the big sticks. I’ve always said the best way to tell if a kick went in, is to look at the bloke who kicked it and Rocca erupted, he knew it was worth six straight away.

Had this been called correctly, what would it have meant for Brisbane? Having fallen behind, with Nathan Buckley playing inhumanly-well and all the momentum suddenly with Collingwood, where do the Lions go next?

Could Michael Voss still find it within himself to turn it on and play perhaps the greatest final five minutes of football we’ve ever seen in a Grand Final? Even if he could, he would have needed to find an extra goal somewhere – does he do it? These are questions which should have been reality and should have been answered, but that’s just the way it goes.

Nonetheless, the match was incredible – one for the history books and one that showed just how good this Brisbane outfit was. The victory propelled the Lions into greatness and marked the club’s second-ever premiership and back-to-back flags en route to a three-peat. It was a three-peat that would solidify Black, Voss, Lappin and Akermanis as one of the game’s most devastating quartets and the Lions as one of the greatest teams ever. Who knows what could have happened if this particular moment didn’t go their way? Maybe they win everything anyway but it’s fun to speculate.

Now, I know Judd won a Brownlow with Carlton and was absolutely brilliant for the majority of his time as a Blue. However, from a club perspective, the trade for Judd wasn’t all that successful. They had four trips to the finals, all of which didn’t amount to much, and a whole lot of wasted seasons being middle of the road.

But what if the trade never happened? What if Carlton held on to Josh Kennedy and built around him? Sure he was raw, but the talent was clear and they’d have kept picks three and 20.

Of course in 2008 the Blues would’ve been worse than they were with Judd, but holding on to such an enormously talented young player and quality picks would have given them a real shot at a successful rebuild and a bright future.

Scoring goals has been Carlton’s problem for almost a decade now and quite frankly, if it kept a young Josh Kennedy around then perhaps it would’ve been able to kick a few more majors with a reliable target coming out of the goal square post-Fev. I’m not saying if they didn’t trade for Judd the Blues would’ve won another flag or enjoyed a deep finals push, but things would’ve gone differently for them and I’d really love to have seen how things unfolded had Kennedy hung around.

Think about a Carlton side with both Kennedy and Fev, a side that never had to rely on Casboult as its number one option (although his career resurgence has been brilliant). Maybe it wouldn’t have worked, but things couldn’t have gone much worse.

What if Dom Sheed was called to go?

Wow, the Collingwood Grand Final heartaches just keep adding up. Admittedly there’s a little bit of recency bias at play here, the smart call is probably ‘what if the Pies went back-to-back in 2011’ and the potential of Malthouse hanging around, but I’ve gone with something a little more specific.

2018 was quite a season and it had a Grand Final to match. It was an all-time classic finished off with a Dom Sheed dagger. But should Sheed have been given the chance? There’s been plenty of debate as to whether or not Brayden Maynard was held by Willie Rioli but I’m not interested in that. What’s always bugged me about this moment was the fact Sheed took a giant step off his line immediately after he took the mark – he was off!

Now usually such an innocuous moment should be let go, but the umpire’s decision not to call play-on was dreadfully inconsistent with every decision they had collectively made throughout the season and the finals series. Step off your line even a little and you’re off. Once again, go back and watch the footage – Sheed’s movement fit this description in every way.

However, had this ‘what if’ come to fruition, it doesn’t necessarily mean Collingwood wins. There’s still a minute left and Sheed likely just bombed a hurried kick to the top of the square with Maynard on his heels. The Eagles could have got over the line anyway – they looked far more likely – but we just don’t know for sure and if this particular Magpies group never wins a flag they should rue this call forever.

What if Daniher could stay on the park?

This is more a broader question than most others. Joe Daniher has been a constant source of frustration for Essendon fans, from his inaccurate kicking to his constantly failing body and now, his desire to jump ship and join Sydney. But you’ve got to feel for Joe – he’s barely played in the last two seasons and is missing a good chunk of what could actually be his prime. And on those few recent occasions where he has played, gee he’s been exciting. How good was he on ANZAC day last season after so little football? If the Bombers got up he’d have walked home with the medal – just an enormous talent.

However, for me, what makes this question so interesting is another question is poses. If Daniher had been healthy this whole time, would Essendon have done much better? There’s no doubt the team would’ve been stronger, but I’m still not sure it actually would have seen better results.

Obviously the 2016 season is void and sure this is a bit of a knock on its squad but that’s just the reality when the league has consistently had six or seven teams flushed with talent and upside; Essendon simply hasn’t been as good. Even today, does the addition of a healthy Daniher push the Bombers over the likes of West Coast, GWS, Collingwood, Richmond, Brisbane, or Geelong? I don’t think so.

So what’s their best then? Seventh? Only one better than last year? Still, we never know and I’m hoping this prolonged break might help give Daniher some more time to get his body right – you hate to see a talent like him sidelined.

Many of you may be asking – who cares? A fair question. He got injured anyway and missed rounds 15-21. However, in my opinion, had Fyfe not been suspended (and pending some retroactive injury luck) we might now have another player in the exclusive triple Brownlow club. I’m aware it’s a massive ‘if’ and I’ll be upfront about my bias, I love Nat Fyfe and think he’s the best playing the game of football today – comfortably – but indulge me for a moment.

Early in the 2018 season he was winning the count easily and playing some of the best football we had ever seen. Just go back and look at the count after round 8 – slightly over a third of the way through the season – he’d already collected 14 votes and the eventual winner in Tom Mitchell only ended up with 28. He was halfway there

At season’s end, Fyfe had averaged almost 30 possessions and goal a game. he’d been brilliant whenever he played and it’s always bothered me that he didn’t make the 40 man All Australian squad in 2018.

My point is this, Fyfe has won two Brownlow medals, something incredibly rare and yet he doesn’t get anywhere near the respect he deserves. Maybe it’s because he plays for Freo, maybe it’s because he’s a more reserved character who doesn’t possess the flare of Dusty or Danger. All I know is this – if he’d won three Brownlow Medals, he’d unquestionably be renowned as the best player in the competition, and he very nearly could have.

Well, that’s a wrap for Part One. Part Two will be released sometime next week.