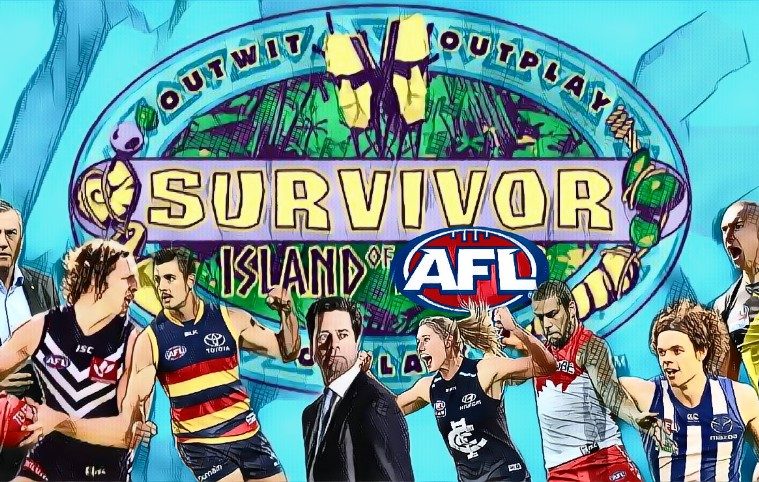 DISCLAIMER – This will not be up everyone’s alley. This is something I started writing and have just gone with it. It’s turned out to be both light and a little dark. It’ll be a series that continues as this break in the season meanders on. If you don’t like it, or prefer your footy content to be completely serious, stop now and resume your regular reading habits. If you’re up for a bit of fun, and aren’t taking things too seriously, by all means, please continue.

It all began with a throwaway line.

Nick Riewoldt sat across the conference table from Eddie McGuire and eyeballed the Collingwood President. The corners of his mouth turned upward ever so slightly. The heat was now on Eddie.

“Well, I have responsibilities,” said McGuire, folding his arms across his chest.

“And I don’t?” responded Riewoldt, throwing his hands up. “I have kids too, Ed.”

The others around the table shifted in their seats uncomfortably. The idea of an AFL-themed Survivor had been one of a hundred ideas thrown out by Foxtel as a way to prevent viewers from cutting the service after the AFL season was placed on hiatus amid fears surrounding the coronavirus threatening all parts of the globe.

But now it was looking more and more like a reality, with the company determined to get bang for their buck with the amount of coin they were a) shelling out for access to the players, and b) the amount of money they were paying their on-air talent to talk about footy…

… of which there was none.

The heavy silence was finally broken by McGuire.

And thus, the ball started to roll.

Jason Dunstall was reluctant to commit.

“You’ll be in your natural environment, Chief. Back amongst the trees, and the foliage…”

“But I haven’t even told you what we’re planning yet,” replied Ed.

Brown furrowed his brow, his eyebrows and unnaturally low hairline almost connecting to provide one horrible, furry forehead. “I said, I’m in.”

“Will I get to take my top off all the time and look deeply into the camera lens?” asked Nat Fyfe.

Fyfe paused for a moment or two.

McGuire smiled. He knew he had the Fremantle captain on board.

“I don’t think it’s the right fit for me,” said Shannon Hurn. “I’m not an extrovert.”

“You’ll be great, Shan. We need leadership, and the players in this game are from all over the country. In effect, it’d be like you’re a captain of sorts. The leader of this team of… of…”

McGuire touched a finger to his lips, as though lost in thought.

Hurn returned the smile. “I’ll think about it.”

McGuire continued to do the rounds, recruiting players or former players from every team.

From Adelaide, it was Tex Walker, claiming his superior intellect would be the key to the game.

Jon Brown represented the Lions, whilst Tayla Harris was the first to put her hand up to represent the Blues.

“You wanted the toughest player at Carlton,” said Harris. “You’ve got her.”

Big Ed claimed to be at a huge disadvantage due to being the only non-player in the mix, and he was allowed an additional selection from the Pies. He chose Jordan de Goey in order to “stop him from getting fat during the break.”

James Hird continued to work his way back into the AFL good graces by nominating himself as Essendon’s representative, whilst Fyfe was never going to pass up the chance for some additional topless and bottomless modelling shots.

Billy Brownless saw this as a way to drop a few kegs and keep his head on the TV, whilst Gold Coast decided that Stewie Dew would probably benefit most from the rationing of food. Also, without a footy department to work with, he was sitting around watching YouTube clips of the 2008 Grand Final in private.

It was getting messy.

GWS nominated Heath Shaw, in order to give the rest of the playing group a break from his constant babbling, Dunstall got the nod for the Hawks and in a surprise move, Foxtel pulled rank and insisted Garry Lyon make the trip.

“They’re going to terminate you if you don’t, Gaz,” explained Eddie. “There’s no footy. They reckon there’s no point keeping you on if you’re not providing value.”

McGuire shook his head. ”You’re still together, right? You and his ex?”

“Then it’s not like you just had a roll in the hay. You’ve committed to her and it’s time people accepted that.”

Ed shook his hand and walked away. His mouth curled ever so slightly in a smile. “This is going to be great.”

Ben Brown got the North Melbourne nomination with the club figuring he can just gnaw at raw bark and whatever vegetation is laying around, and it won’t be too far removed from the lifestyle he currently leads, whilst all the other combatants appeared visibly upset when Kane Cornes’ name was floated as the Port Adelaide representative.

Dustin Martin’s nomination raised a few eyebrows, with most expecting the Tigers to flat out refuse access to their biggest star.

“He’s his own man,” said Damien Hardwick, “and he’s got to make his own stupid mistakes… just like Adam Treloar did when he thought Collingwood had a better list.”

Nick Riewoldt honoured his agreement with Eddie and took the St Kilda nomination, whilst the Sydney Swans refused to comment as to why Lance Franklin was permitted to partake. A source close to Franklin shed some light on it for us.

“He’s got a kid at home… he’s not sleeping. We didn’t even have to approach him. He wanted to get the hell out of there. Some are even saying the show was his idea as a way of getting out of there and getting back to the life he once had.”

Caleb Daniel was thrown into the mix by the Western Bulldogs, but when he showed up without his helmet, many of the others figured he was there to carry their bags.

For the record, he carried their bags.

And rounding out the cast of the first-ever AFL Survivor was Shannon Hurn, who was permitted to sit up front with the captain of the flight but was told in no uncertain terms that’s as far as he would get on this flight.

The cast flew to a remote island on two separate flights, the location of which I cannot disclose at this point – it’s Tasmania – and prepared to enter the jungle/forest for the first-ever AFL Survivor.

‘Nips Out’ Nat Fyfe had his top off before the plane landed, and was busy looking for a camera to stare into, smouldering. His eyes met those of Tayla Harris and there was a brief moment of…

“It was disgust,” Harris said later to the camera. “Unadulterated disgust.”

“I think there could be something there,” said the oblivious Fyfe in his first isolation interview.

Brownless and Lyon gave each other a wide berth in the hours before the instructions of the show were issued, but if looks could kill, Lyon would be a rotting corpse on the coastline of Tasmania. Already, there seemed to be divide forming in the group – some wandering over to sit by Brownless, whilst others made a point of speaking to Garry. Was this the beginnings of an alliance or two?

“Welcome to Survivor,” started Eddie, still wearing a suit, but being slightly less formal as his top button was undone and his tie slightly loosened. “I want to go over the rul…”

“That’ll be enough from you, Ed,” came a voice from behind them.

The man stepped from the shadows to reveal a face that now looked several years older than it had just a few weeks earlier. Gillon McLachlan stepped forward with a folder under his arm.

“I’m sorry to say, my friends, but the public need their pound of flesh. In a time with no sport, no gladiators and nothing to watch, they’re getting restless, and I’ve been charged with producing something to keep them occupied.”

Gil continued to move forward, and several other figures emerged from the shadows behind him. It seemed as though they were carrying… weapons?

“This is not your typical game of Survivor, people. Drastic times call for drastic measures, and when I stated that the public wants their pound of flesh, I’m afraid it’s been made abundantly clear that they don’t want it… alive.”

Concerned looks were exchanged before Eddie moved to step forward.

And was halted by the sight of a gun being levelled at him.

“There are two ways off the island,” said Gil. “One is to win the contest,” he said, trailing off.

“And the other,” asked Ben Brown?

Gil’s lips tightened into a straight line as he looked at each contestant in turn.

Gil reached back and a black bag was handed to him.

He threw it out on the ground before his assembled cast of current, and former stars of the game. And Eddie McGuire.

“I’ve got to give the people what they want. I’m sorry.”

The AFL-version of Survivor is about to begin. Who is your pick to win it all?