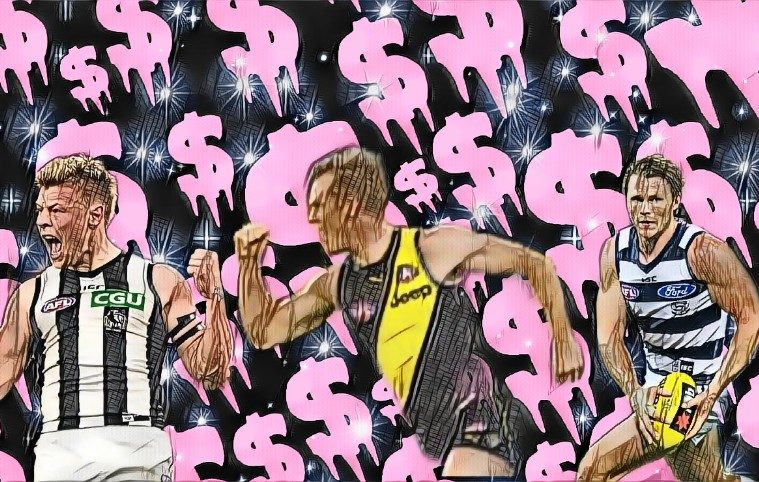 In an effort to bring clarity, and an opposing view to an argument that may seem settled, Clinton Bishop will take your arguments and offer an alternative view. Is he the Devil’s advocate, or the Devil himself? I guess it depends on which side of the fence you sit.

As part of my work here at The Mongrel, I trawl the Facebook comments looking for things to disagree with. It’s a tough job, but somebody has to do it, and let’s face it, I’m lucky to still have something to do.

Which brings me to the topic at hand.

I’ve seen a few people here and there expressing concern for AFL players, coaches and staff being stood down during this time of no football, and I’ve also seen just as many comments suggesting that the players, in particular, don’t really deserve our sympathy because they have been on good money for years to do the thing they love. So, it seems to me that the majority of people think they’ll be okay.

Before I start with why I disagree, I have to admit that I do agree with some of you on some points. So, here’s where I do agree: AFL players are likely the best paid professional sportspeople in any competition in Australia. I also agree that for the most part that players love the game. I’m also sure that, for the most part, they will be okay but that doesn’t mean we can’t empathize with their situation.

For a start, sympathy isn’t a finite resource. I can still sympathize with an AFL player being out of work while maintaining sympathy for the bar staff at my local pub and the nurse at the ER. There’s plenty to go around. A person losing income is a person losing income. I feel for those impacted by it.

Furthermore, for every champion running around at a club on top-dollar, there are a number of blokes running around who are on a rookie list, on their last contract or at the fringe of the best team. For these players, this break in football could not have come at a worse time.

Take for example Brendon Ah Chee at West Coast. He played one game in 2019, and then he played a blinder in the forward pocket in Round One. He’d be on a base contract and would definitely know that if he’s not in the best 22 for most of this year he won’t be playing at all next year. Round One was his chance to show what he was capable of, with both Oscar Allen and Jake Waterman not playing. If you asked people who they’d prefer in the team of those three players, most would likely have Ah Chee as third in line.

And now that opportunity has not only passed him by, but his pay is likely to be slashed as well.

The others that are going to do it really tough are those that have just been drafted, on the way to starting their AFL careers and dreams. They have worked hard in development and under-age squads, fit in training around school and possibly moved interstate. They’ve given up a lot to get this far and now it’s all up in the air. Whilst the hopes and dreams of many of these young players are not shattered by recent events, they’ve definitely been kicked around, and may have a crack or two in them.

First-round draft picks receive an annual base salary of approximately $95K under the current agreement, with an added $4K per senior match. Well, if the cuts go through as expected, and the players lose 80% of their wage, those kids, some of whom have relocated, will be on about $20K for the year. No match payments, obviously.

Second-round picks are on less.

Not exactly living the dream, are they?

Finally, it’s worth keeping in mind that only 31% of players reach the 50 game milestone. Playing AFL football is a hard gig to get, and even more difficult to succeed at. Having it taken away must be hurting.

I do feel for the hospitality workers who have seen their entire industry shut up shop. Those who work in movie theatres, specialty shops and ay service that is deemed non-essential.

I just think we can spare a thought for our AFL heroes too. Again, sympathy is not an infinite commodity. I can spare a bit for most.