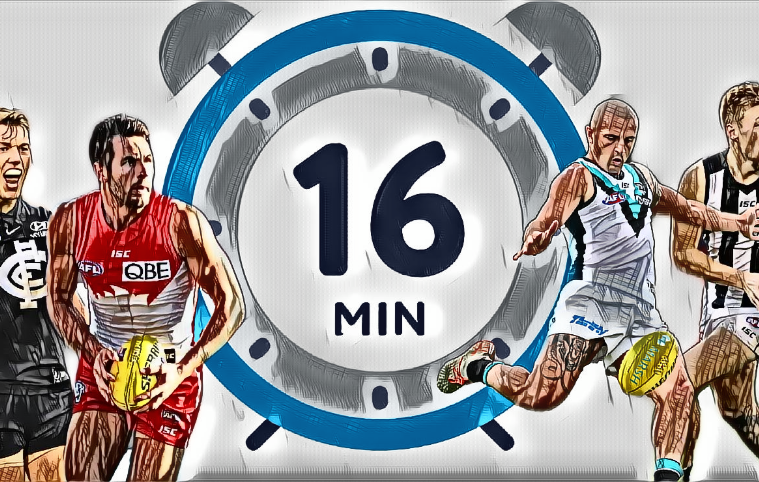 Are The AFL Sneaking Through a Major Change Amid The Crisis?

I have a few mates who are conspiracy theorists, and admittedly, a bit of it has rubbed off on me over the years.

They have their opinions on those in power, those with the money, and the motives behind things like the European Union and the US Presidential races, and for the most part, I listen, smile and nod. I mean, they look more deeply into this stuff than I do.

They’ve told me about the JFK assassination and the reasons they believe were behind it, the Illuminati, the world bank and the Clinton Body Count.

Again, interesting stuff, if a little far-fetched in some cases. But Epstein definitely didn’t kill himself – on that, I think we can all agree.

Anyway, I choose to focus my attention elsewhere for the most part.

But that doesn’t mean I don’t keep my eye out for a little bit of a conspiracy here or there in my own little world, or a little bit of underhanded subterfuge to pull one over the eyes of the unsuspecting AFL supporter. And given that, I was particularly disappointed when the AFL attempted to slip one past us over the past weekend in an effort that has been wholeheartedly endorsed by the AFL Media since.

Shorter quarters appear to be on the agenda for 2021, irrespective of what happens for the remainder of the 2020 season.

This was discussed openly on the combined AFL 360/On The Couch programming on Fox Footy on Monday the 23rd of March, after a ‘huge’ sample-size of nine games across a weekend that felt like anything but a round of regular AFL footy. But there was Gerard Whateley, the Waylon Smithers to the AFL’s  Mr Burns, proudly proclaiming that 16 minute quarters were definitely going to stay next season.

Well done, Gerard – the cheque is in the mail, I’m sure.

Things like goal-kicking accuracy were used as justification for the permanent change, and although the numbers back that up this season (up to 56.61% from the 49.75% in Round One of 2019 and 51.5% in Round One of 2018) what is being neglected in this argument is that there is no crowd noise, movement or distraction to offset the players as they kick.

But that wouldn’t fit the agenda to implement the change, would it?

Whilst the AFL has much bigger problems to focus on in 2020 than how long quarters will be in 2021, this was actually a little bit of forward-planning by Gil and his mates, here. Credit where it’s due – they’re not allowing an opportunity to pass by; not when it makes things easier in the long term.

Shorter quarters have been floated as something the league has been looking at for quite a while now. They don’t like how long the game takes to play, you see, hence the idea to shorten half time by ten minutes earlier this year.

But shortening half time eats into advertising time. Shortening actual game time… now that’s where the money is!

As such, it was more than a little opportunistic to stick shorter quarters into the games this season as a trial to see how it would go before announcing it as a permanent rule change. I should have written about it at the time of implementation, but truthfully, I was just happy to have footy back at all

Under the guise of reducing game time to enable players to recover more quickly, it is becoming apparent that whether this was a compromised season or not, the AFL was always planning to cut the game short, and reduce actual game time in the process.

Of course, they once again fail to ask themselves this question – why fix something that is not yet broken?

My same conspiracy theorist friends tell me that people in power use times of crisis to slip things through whilst everyone is distracted by what’s happening.

Are you distracted enough at the moment? Talk of the survival of the competition, the survival of the clubs, and the more importantly, how each and every one of us navigates through the next few months of complete uncertainty dominate our collective psyche. What better time to sneak through a major change to our game? I mean, they already justified it and implemented it – the hard work is done. They’re backing it up with media statements about how the game may look “very different” once things recommence.

I once worked at a service that was geared toward community engagement. It was about building relationships with the community and that meant consistency, familiarity and reliability with our clients. Then, one of the people who didn’t work in the area of face-to-face contact with people thought it would be much better if there was some sort of uniform so that staff were clearly visible to clients… even though clients knew every staff member by name because that was our actual job to get to know these people and help them!

Anyway, this uniform thing was instituted as “a trial”.

Fast forward three years and what do you think became part of the business practice at that service?

Yep, uniforms.  The trial became the norm without a review, and without any consultation. Change by stealth.

Things green-lit as trials or temporary measures have a habit of becoming permanent fixtures way too often, and the AFL is no different. Whilst we are all looking at the big, scary virus, and listening to people lament the future of the game, the AFL has taken the opportunity to slip in a change to the game they were going to make anyway.

And they used this crisis as an opportunity to stick it in there, irrespective of how supporters feel about it.

Mark my words – 16-minute quarters are on the agenda going forward, but in a climate where the people have lost something dear to them – the people’s game – they’ve lost footy, is it wise to try to pull the wool over their eyes and institute changes to a game already on shaky ground? Is unnecessarily angering your loyal fan base the way to move forward, or is it a huge step backwards?

The AFL is going to need all the support it can get in the coming 12 months. We all love our footy, and we all want to see the game come out the other side of this crisis.

Trying to slip one by us while we’re not looking is underhanded and bloody sneaky.

The thing is, with AFL fans, we’re always looking. And we see what you’re doing. Leave the game alone.