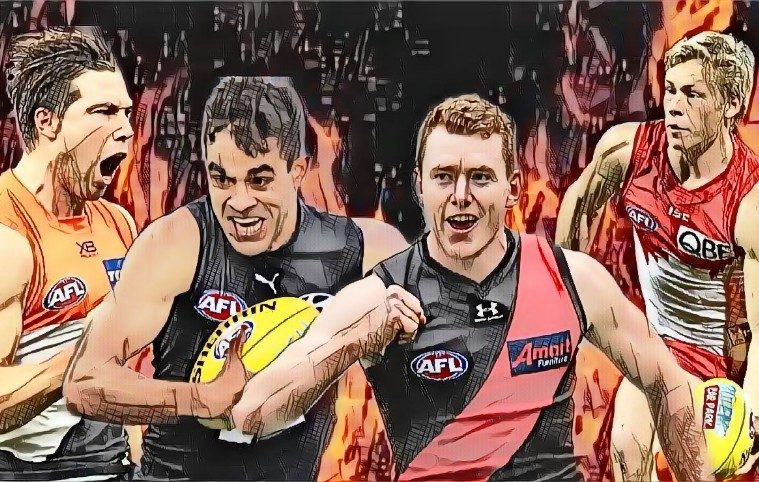 It was pretty obvious in the first quarter of the Thursday night game when a couple of soft 50m penalties were given that the umpires were keen to impose themselves into the game. And with nobody in the stands to in some way influence their decision-making, it’s plain to see that the theory of umpires being swayed by the booing and cheering of parochial crowds is not the reason they sometimes make errors which influence games. I just don’t think the talent pool in the umpiring world is deep.

2. Move over Dusty, there’s a new Martin in town!

In what was a pretty bleak first half for the Blues, there were signs that Jack Martin looked at home wearing the guernsey. He held his own to half time in a team that was soundly beaten, then in the third quarter single-handedly brought Carlton back to within some kind of striking distance to the Tigers with four goals in a scintillating display. However, the result was never in doubt. Hopefully the break doesn’t end the momentum he was looking like building.

Many had the Dogs finals-bound and possibly even Top Four. And many had Collingwood maybe slipping a few ladder positions. Not me. But I did expect a better showing than this from the Dogs. They were soundly beaten all over the ground and clearly have some forward woes booting just five goals. I know it’s only one game, but they’d want to be better than this when the season returns. The Pies on the other hand looked seriously good.

4. The Bombers would be glad that the quarters have been shortened.

In what was one of a few games of two halves, the Bombers shot out of the gate blowing the Dockers away only to let them back in to survive by just a kick. From what I witnessed of this game, neither side looked in the top echelon, but it was good to see Jacob Townsend have an influence at his third club. He is a seriously good footballer who was just in a side that couldn’t fit him in.

The skill level of the Giants is sublime. As a Blues fan I can only watch with envy. When this team are on they’re as good as anyone. The Cats weren’t terrible but the Giants just outdid them with sheer class. Toby Greene is a Top Five player for mine. Even if he does have a head you want to smash, you’d have him in any team.

6. The Crows will find it hard this year.

Losing at a home to a young Sydney Swans outfit is a concern. Yes, they almost pinched it, but the result flattered them as they were never really in the game. They had no answer for Isaac Heeney, and the old-stagers Kennedy and Parker were big factors. Matthew Nicks has a huge job injecting some fight into this outfit. How long will the spectre of 2017 haunt this team?

7. The Lions still can’t win at the MCG.

The last win Brisbane had at the home of football was against an injury-hit Magpies outfit on August 16, 2014. For many they went in as favourites against a team who they’ve had the upper hand over in recent times. But the Hawks were far too strong and Shaun Burgoyne at 37 is still looking as fresh as a daisy. If this season resumes, he’ll be playing his 400th in 2021. He could go on till 40!

8. The Saints did everything right during trade period and nothing right after half time.

I must admit, I wasn’t one of those who thought that the St Kilda trades would automatically propel them into the finals. Don’t get me wrong. Brad Hill is a star, Paddy looked OK, and Jones, Butler and Dougal weren’t terrible in their first outing in the red, white and black. At half time many Saints fans would’ve been giving each other that grin of “this could be the year” kind. But then it all fell apart. What was a lacklustre and indirect Roos outfit in the first half clicked into gear while the Saints went into their shell and managed just one goal after half time. The shinboner spirit (believe me, I hate that term too) dragged the Kangas over the line in what was a thrilling win, but one that definitely got away from the Saints. Brett Ratten will be “roo”ing that one for while. (see what I did there?)

9. The Eagles are too clinical and the Dees are lucky they can come home.

A lot of you would’ve been a little disinterested in this game. We already knew the season would be halted before the ball was bounced which kind of created an eerie feeling of pointlessness. But, as expected, the Eagles showed their might and gave warning of a big year ahead. Nic Nat and Gaff will prove to be a dominant combination throughout this disjointed season. The last quarter seemed to peter out with the knowledge that there’d be no footy for 10 weeks. Someone must’ve informed the players at 3/4 time.

10. Stuart Dew and Matty Kreuzer are the only two blokes in Australia who are happy the season has been suspended.

For my last point, I surmise that there are some people who would be happy the season is on hold. If you’re into conspiracy theories, then those trying to destroy capitalism by unleashing this virus into the world would be among them – but I digress and, for the moment, I’ll take off my tin-foil hat. In AFL circles, one would be the Suns coach Stuart Dew. After a promising build-up in the Marsh series, and a good bit of recruiting, one expected the Suns to serve up a competitive effort. Alas, it wasn’t to be as they managed just four goals and looked like a side that had not improved on a dismal 2019. The other, of course, is the fragile but talented Matthew Kreuzer. After breaking his foot in the second quarter on Thursday night, the prognosis was a 16-week recovery. Usually that’s almost season-ending. But hey, he might be back in time for Round 2!!! Footnote – I can’t believe the footy is gone till the end of May. I blame Port Adelaide for pushing the China experiment. The Chinese government have spoken! I think it’s fair to say we won’t see that again…