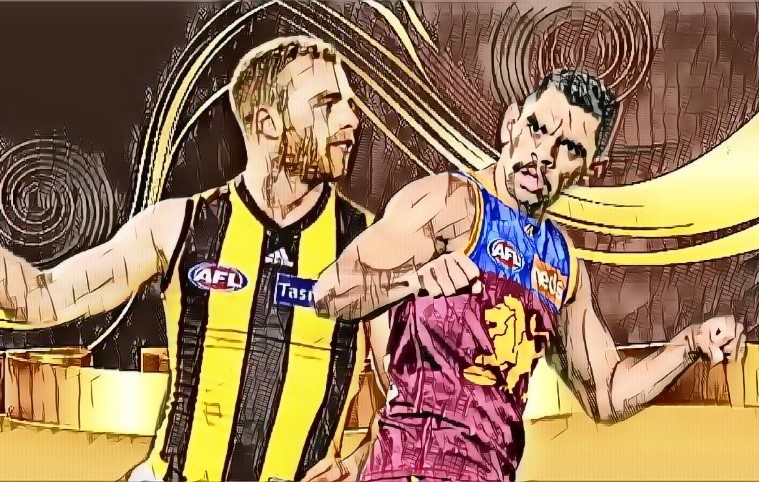 Brisbane vs Hawthorn:  A Not So Quick Yarn. By Joseph Arthur

Well, it was fun while it lasted. After giving us a little taste of the 2020 season, Gillon McLachlan announced the league will be shutting down until at least May 31 and honestly I haven’t felt this flat about anything in a long, long time.

Although shutting things down is – in my opinion – the right decision, it hurts. Until now, football has always been something the country could rely on, but now courtesy of COVID-19, even our beloved game will have to wait.

However, life goes on and there’s a game we need to discuss – welcome to a not so quick yarn.

This one was a real arm-wrestle, tight through three-quarters before Hawthorn ran away with it in the final term, winning 14.6 90 to 9.8 62.

Wingard, Burgoyne and Mitchell were among the best for the Hawks, while Neale, McCluggage and Hipwood were good for the Lions.

In what was an even contest for most of the afternoon, the eventual difference was finishing. The Hawks took advantage of their opportunities, while the Lions let a lot of half chances go begging.

This didn’t happen by chance however, when the game was there to be won the Hawks were threatening inside forward fifty, giving their forwards every chance with penetrating kicks into the arc. The Lions however, too often found themselves held up by Hawthorns unforgiving and at times impenetrable defensive structure.

Brisbane’s forward fifty entries made it tough for Hipwood or McCstay to get a decent look at anything in the air. Their job against the marking capacity of Hawthorns backline, with the likes of Frawley, Gunston, Sicily, Stratton and new recruit Frost, was too tall a task. The stark difference in the quality of forward fifty entries was made clear at halftime when Hawthorn went into the main break with nine marks inside 50 compared to Brisbane’s two.

Another key to the game was transition, Brisbane had more of the ball than Hawthorn, but failed to execute and effectively use the footy across the ground. The Hawks on the other hand, forced turnovers and transitioned into attack with pace, consistently running into an open forward line and giving the forwards space to operate.

In the end, 70% of Hawthorns 20 shots on goal were worth six-points, while only 53% of Brisbane’s 17 were majors – there’s your difference.

MITCHELL BACK IN FULL FLIGHT

After suffering a broken leg before the 2019 season got underway, Mitchell made his long-awaited return to the AFL. It didn’t take long for the 2018 Brownlow medallist to get back to his old ways, collecting 25 disposals to lead Hawthorn in the shortened match, only beaten by Lachie Neale of the Lions who had 26.

His influence may not have been as grandiose as we’re used to, but disposing of the ball at 84% efficiency and having 14 contested possessions are great signs after such a long time on the sidelines.

Jonathon Patton made his return to footy and debut in Hawthorn colours alongside fellow recruit, former Demon Sam Frost. The pair certainly had their moments without either completely dominating or disappointing.

Let’s start with Sam Frost. Recruited from Melbourne, Frost’s time with the Demons was up and down. He had some dirty days and some clangers, but showed enough talent and promise for the Hawks to come knocking and you know what, I liked what I saw.

If anyone has proven to get the best out of his recruits its Clarko, just look at Ricky Henderson who went from being delisted to finishing runner-up in Hawthorns best-and-fairest. Frost started the game well, getting the early job on Hipwood and although the Lions youngster found the scoreboard it was through no fault of the Hawks’ new recruit.

Frost had his opponents’ measure in the air and although his disposal leaves something to be desired, the lad’s got awesome endeavour and boy, is he ever an athlete. In the third term we got a glimpse of what the big boy can do, bursting off half back with three bounces and lightning speed – we won’t worry about the kick too much just yet (everyone’s rusty in Round 1 right?). All in all is what a positive start for Sam Frost in his new colours.

As for Jono Patton, his day went slightly differently. It was a slow start and it became clear immediately that Harris Andrews had his measure, winning all the early one-on-ones. However, Patton was patient and worked his way into the game, making some good decisions in the forward fifty, palming off a goal to Luke Bruest and finishing one of his own in the final term.

After three ACL surgeries, it was a huge win for the Hawks just to see the big man get through the game. He looks to be in great shape for the first time in a long time, he competed well and ran out the entire game unimpeded by injuries – hard not to be happy for the former number one pick.

370-odd games under his belt and at this point in time, Burgoyne’s 19-season career has outlasted the league itself. But this isn’t your usual tale of an ageing star, the 37-year-old continues to contribute at a high level and if this afternoon was any indication, the forward line is the perfect place to finish his storied career. His three goals led all scorers across the game and along with a couple of goal assists, the veteran showed just how much of an influence he can still have.

His 10 disposals across the four shortened quarters were felt by everyone watching the game, each one penetrating the Lions defence in some fashion. What’s most astonishing is the shape he’s still in, built better than many others within the league, Hawthorn played him at centre half forward and he wasn’t out of place at all. The 400 club is waiting and my money’s on Burgoyne joining those elite few before his time is up.

WE WON’T MISS THAT (TOO SOON?)

Look, it’s up to you whether or not you put stock into trends like this but Brisbane can’t win at the ‘G, it sent them home last year and the woes continued this afternoon against a team it needs to be beating if its serious about contending in September, or possibly December? Now don’t get me wrong, the Hawks may very well be a good team in 2020 and the Lions didn’t play badly today by any stretch, but its games like this one they should be winning.

They got into the contest, were on top early and whenever the Hawks looked to pull away they responded…until they didn’t. Brisbane is still a very young side with an enormous amount of talent, but the question will be asked all year, especially early on – were they one hit wonders? The Lions had a chance to make a statement and much like many of their opportunities in front of goal, they didn’t take it.

Charlie Cameron was dangerous up forward, Harris Andrews was elite down back and Lachie Neale kept the engine room ticking over, but the Lions were simply outlasted by the Hawks. Could this spell danger for the rest of the year?

Hipwood is only 22-years-old and showed plenty of promise with three goals in what was a great game from him and McCluggage had a good day and looks poised to make another leap too. So there’s a good mix of established stars and promising youngsters in the Lions core and yet they looked a little thin.

We’ll give Robertson a pass on debut but I’m not so sure Brandon Starcevich and Marcus Adams are players you want in your line-up consistently. No cause for alarm just yet, but if injuries were to hit Brisbane I’d keep an eye on who’s making the 22 each week. Maybe I’m being too harsh but there were a few passengers out there in Lions colours, particularly towards the end.

The scoreboard doesn’t reflect how close this contest was, contested possessions were almost even (123 Hawthorn – 120 Brisbane), as were contested marks (10 – 8) and clearances (28 each).

Clangers (45 – 58) and 70% accuracy in-front of goal opposed to 53% were the only major differentiating statistics.

I’m jumping the gun a little bit here but Cam Rayner frustrated me today. He shows so much potential and promise, but the former number one pick still looks like more of an athlete than an AFL player. He’ll come bounding through the centre and kick a goal from fifty one minute, then he’ll follow it up with a shank, two dropped marks and a dumb handball. It’s a big season for the youngster and it’s high time he starts to take over a few more games.

Chad Wingard – The recruiters might have got this one right. He looked in great shape and more importantly, was playing with the right attitude. He was unselfish and aggressive for four quarters and is a real chance to poll votes from his three goals and 20 touches. If he can recapture his All-Australian form, it could go a long way towards the Hawks making a deep run in the finals.

Finally, I’ve been a little harsh on the Lions in this one but it’s only because I have high hopes for the youngsters. In a bright spot, Lachie Neale was terrific with 26 touches and goal, going at 76% efficiency and a whopping ten tackles. He’s a genuine Brownlow threat and has the pedigree to lead his side to some big victories as the year goes on.

With that said, we’ll reconvene in ten weeks – anyone got any good hobby recommendations? I’m running a little thin.