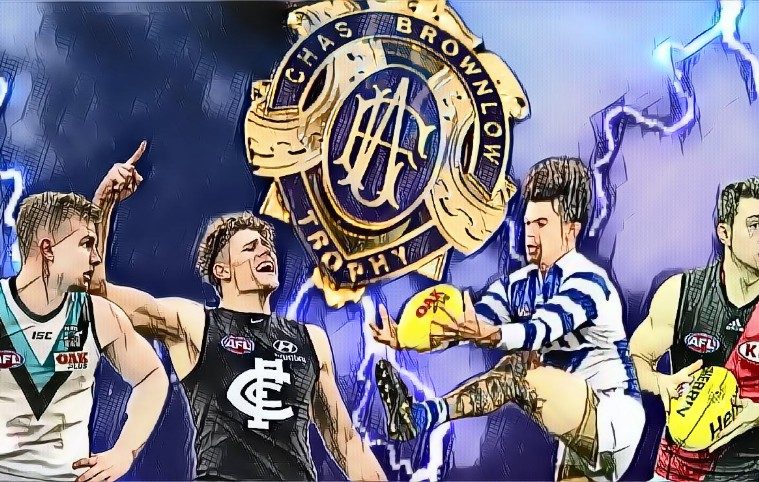 So, as we ponder and worry about a season without footy as we know it, all is not doom and gloom.

You see, this off-season has given us a wealth of material to work with as we await the decisions that will guide us through these troubling times. Sure the AFL are considering games without crowds, and the possible postponement of the season (which would be pure idiocy as there is no guarantee anything will be different in a month’s time) but we here at The Mongrel like to focus on the positive, even if it is hidden amongst a big, pile of steaming negative.

And with that in mind, we unveil the first-ever Mongrel Punt Off-Season Brownlow.

Let’s check out the nominees.

As Essendon were in the midst of an “injury crisis” according to our friends at the Herald Sun, young Conor decided, not for the first time, that he needed to run home.

Now, that’s all fine – we hear it from some players who can’t stand the thought of being a couple of states away from their loved ones, and Conor is half a world away, but when the Bombers were looking a little shaky in terms of players that could actually get on the park, McKenna caused some unnecessary panic by packing his bags and heading home.

Also, his dye job last season was bloody horrible and only an equally poor effort from Matt Guelfi and an even worse effort from Orazio Fantasia saved him from winning our yet to be established worst hairstyle in the game award(current frontrunner for 2020 is Pepa Randall in AFLW).

Ah, Steven – a prized recruit with skill to burn, who plays an average of two good games per season. Sadly, he used one of those two games in the pre-season this year.

Against the Lions in week one of the Marsh Series, Motlop unleashed for three goals and 22 possessions. They matched his season-high numbers in both categories from 2019 (both from Round Two v Carlton) and can only mean one thing.

It’s all downhill from here.

A footy in the face happens. The ball is travelling at high speed and a deflection, or being knocked off balance can throw the judgment off a little. The result is a sherrin whacking a player right in the nose.

Jasper Pittard felt the full force of the falcon in the Masrh Series game against the Swans, rising his to spoil, missing the mark and wearing the footy, smack-bang in the face. Look, it’s happened to the best of us, but usually doesn’t happen twice.

Pittard copped it again in the same game, when the ball surprised him by bobbing up and clocking him in the face for a second time as he fought for possession at half-back.

David King joked that if it hits him in the face one more time, the coach would strap a boot to his head. Pittard races into contention not just for his efforts, but he also was close to doing the impossible – making David King funny.

He tried to do the right thing this off-season. He really did. After missing substantial time in 2019 following a water-skiing accident, Wines decided to confine his physical exertion to the football field and training track in 2020.

It was a noble thought.

He may as well have gone water-skiing. His efforts to be responsible landed him in the same predicament as 2019, injuring his other shoulder. He is set to miss significant time as a result.

It’s not often that your new coach comes out and basically says that you’re not good enough to make the team, but after toiling away for a spot in the Adelaide midfield rotation, the move to Brisbane was supposed to be the opportunity that Ellis-Yolmen desired.

And then Chris Fagan planted a foot well and truly in his ass by not playing him in the second Marsh Series game.

Look, I still believe in Cam Ellis-Yolmen and think he will make a huge difference to the Brisbane midfield in 2020, but the warning shot has been fired by his coach, and CEY needs to take notice.

So, Ken Hinkley has his back to the wall. He knows that it’s either finals or bust in 2020. So what does he do?

He comes out swinging and throws the biggest haymaker he can muster – Port to win the flag.

After missing the end of the 2019 season with a knee injury, Charlie Curnow went out and reinjured that knee playing basketball. Sure people get on the back of Phil Inn, but Curnow was even dumber – he hurt himself playing basketball.

That’d almost be enough to win him the award, but Charlie wasn’t done. Not by a long shot.

Soon enough, word trickled through that Curnow had reinjured the same knee again “slipping on tiles” at home, and that doesn’t sound at all suspicious, does it? It reminds me of the time Joe Ganino accidentally fell on a bicycle handgrip whilst having a shower and the handgrip became trapped… hmmm… “internally”. Amazing how often that happens…

Curnow is one of the keys to the Blues’ 2020 improvement, but he won’t be helping that in the first half of the season, as he sits out, nursing himself back to health. Again.

So, there are my nominees for the Off-Season Brownlow. As always, if you have a nomination, add it in the comments, or hit me up on our socials. I don’t think you can have enough nominees for an award as prestigious as this.