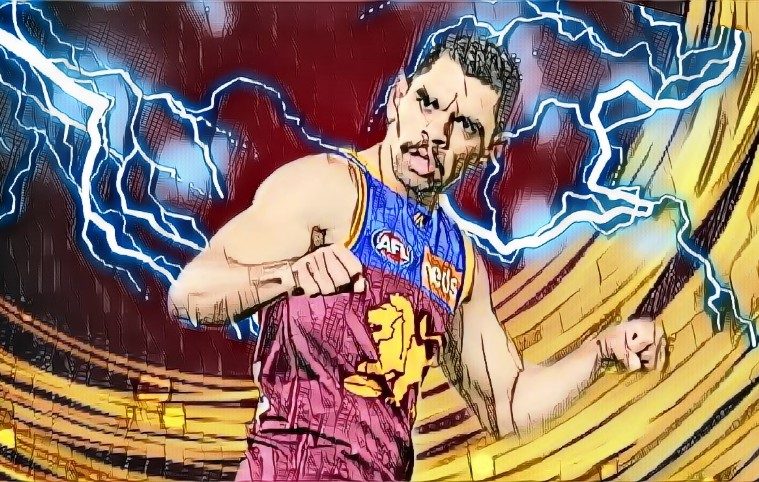 The Brisbane Lions looked anything but contenders in the first half of their Marsh Series encounter with Carlton at Princes Park.

The Blues got off to a fast start, kicking the first four goals, and welcoming Eddie Betts back to the fold with the first goal of the game. They looked sharp, with Patrick Cripps and Sam Walsh dominating through the middle.

But as good as their stars were, there were still plenty of cracks in the Carlton armour, and the Brisbane Lions found them, and exploited them to run away with a comprehensive victory.

Let’s look at some of the standouts.

There are a number of reasons the Lions got on top of the Blues in the second quarter, but one of the main ones was the play of Zac Bailey through the middle.

Charged with keeping Patrick Cripps quiet, Bailey was failing miserably in the first half, but persistence, and a determination to have an impact on the game, saw Bailey emerge as one of those who turned the tide in favour of the Lions.

Some of his run and carry wasn’t built on finesse or running power – it was built on heart! He is the sort to take the ball under his wing and crash into and through packs to get the footy where it needs to go.

He had just 16 disposals in this game, but his ability to break lines and pump the Lions deep inside their attacking 50 was pivotal in their fight back.

Zac Bailey is not a household name. He happily sits in a rotation behind Lachie Neale, Jarryd Lyons and Dayne Zorko, but what he brings to the table is the hard-nosed, blue collar work ethic that saw the Lions kick-started in the second half. Every team needs a player like that.

It was a tough day at the office for Lachie Neale, as it is for any AFL midfielders when Ed Curnow goes and stands next to them at stoppages.

Lachie Neale picked up some late touches to end with respectable numbers – 23 touches, but when the game was hot, Ed Curnow was all over him.

Curnow is unlike other taggers. Whilst he will move heaven and earth to prevent his opponent from getting a touch, he will also go after the footy often, and can rack up big numbers in the process. He finished with 20 touches and a goal in this one, but his harassment of Neale clearly impaired the reigning Brisbane best and fairest.

When speaking of the Curnows, it is often Charlie that gets the attention. He is the key forward that takes the big hangers, but it is the solid, consistent work of Ed Curnow that probably deserves more plaudits. He’s the one out there every week as his brother finds new and interesting ways to injure himself in the off-season.

Ed Curnow may not have his name up in lights, but I am sure every person at Carlton knows how valuable his contributions are to this team.

A POINT TO PROVE

What should have been a time of celebration for Charlie Cameron in 2019 turned into more of a wake.

After being towelled up by Dylan Grimes in consecutive games, Charlie injured his arm against the GWS Giants. Despite courageously playing on, he was unable to impact the contest the way I am sure he imagined he would.

It’s been a long wait, but the path to redemption started in the Marsh Series for Charlie, and he grasped this opportunity with both hands.

After being held goalless in week one, Cameron wasn’t about to give his detractors any ammunition, and he set about establishing himself as the most dangerous forward on the park, with his old running mate up the other end watching.

Cameron finished with five goals, and could have had a couple more. He was far too agile for Lachie Plowman or anyone Carlton could throw at him, and looked really sharp, even when the rest of his team struggled to get going.

After 57 goals in 2019, could Charlie top 60 this season? Health permitting, I would not put it past him at all.

There was a point in the last quarter where the game was iced and players were just playing out time. Except for Zac Fisher, who was busy looking busy.

But one other bloke was still working hard, not for himself but for the betterment of his team.

Mitch Robinson’s lunging, desperate spoil at full stretch sums him up perfectly on the footy field. Where angels fear to tread, Robbo dances. Where others give a cursory effort to disrupt, Robbo puts himself in harm’s way. Where there is a loose ball to win, Robbo commits to it, 1005. It matters not how long there is to go in the game or what the score is – Mitch Robinson will give you 100% every single time he is out there, and he showed it again tonight, even when others had put the cue in the rack.

The Lions could have used him in the semi-final last year. He makes a difference.

Earlier this year I wrote a season preview, and contained in it was a list of players I was worried about coming into this season. Not due to injury, or anything serious – more due to the fact that either a) I don’t think they’re much good, or b) they’re not yet ready to play consistent senior footy.

Cam Polson was on the list, as was Lochie O’Brien and Paddy Dow. Now, you may look at Dow’s game this evening and think he did well. 18 touches with a great mix of contested and uncontested touches. He burst away from a stoppage or two after receiving a handball and at points, started looking like he belonged.

But that is an illusion.

Dow ran at just 38% efficiency in this game. Less than half of his possessions – not kicks, but all disposals – found the mark. So whilst Gerard Healy talked him up and spoke about where he should be, the reality of it all is that Dow had one good quarter in this game, and even that was dotted with disposal errors.

So that’s one in the bottom six. Wanna know the others? I bet you do… and I bet you already know who they are.

Mitch McGovern stumbled and bumbled his way to four touches in another completely inept display as a forward. He looks thinner but if only losing weight made you better able to judge the footy and get involved. Still… his moustache is coming along nicely.

Caleb Marchbank looked completely lost at sea in defence and turned the ball over with two of the four kicks he managed to execute before he got injured and left the ground.

Zac Fisher was an absolute passenger in this one as well. Racked up a few touches late in the game when he was still running around at top pace and everyone else had stopped to a walk. Wanna know why he was still going at top pace? Because he’d done nothing at all for the first three and a half quarters.

Jack Newnes had people question his recruitment after one of the more abysmal kicking exhibitions we’ve seen. He had 20 touches for the game and I cannot remember him hitting a target. I can remember him missing a shitload, though.

And finally, this one may come as a shock – Will Setterfield. 23 touches, with seven turnovers and running at just 56% efficiency. The problem here is that 18 of his 23 touches were uncontested, meaning he had time to assess and choose the best option… and still cocked it up!

Look, this was just a practice match, but if you think these blokes are going to flick a switch and miraculously get better, you have another thing coming. Dow needs a run of ten games in the VFL. Toughen him up before you ask him to get 25 touches per game – his career high is 23. Send bloody Fisher there while you’re at it. He needs a kick in the ass after that effort.

Okay, so the above section was a bit of a belting, but there are still positives to takeout of this game.

Liam Jones was wonderful deep in defence. His game in stifling both McStay and Hipwood showed that, when able to play as the deep, zone off defender, Jones can still get the job done.

Nine disposals does not tell the story of his game. He had three contested grabs, 14 big spoils and nine intercept possessions, rivalled only by Harris Andrews for the best defender in the game.

Jones is ably supported by Jacob Weitering, but I wonder whether there is a way to have big Levi trotting back there more often to help out in the air as well. The Blues may have to wait until McKay and Curnow return for that to happen, as leaving that forward line with McGovern as the number one marking target is asking to be belted.

He stood up in this one. He’s not overly quick or manoeuvrable, but Silvagni does a lot of things well without do any of them exceptionally.

His hands were good in this one, and his presentation at the footy was top notch. He gave the Blues a moving target inside forward 50, and was not hesitant in leading way up to the wings to draw the footy.

I thought Silvagni was really poor in the first game of the Marsh Series, but if there is such a thing as Marsh redemption, Silvagni experienced it this week.

Pretty nice game from Jarrod Berry, who is another that could take a big step in 2020. He has spent a bit of time running around with the league’s best mids at one time or another, and may have picked up a few things along the way. He works hard to cover both ends of the park, and showed several of the Blues around his age how to win the ball and work hard.

I reckon Eric Hipwood is better with the ball on the deck than in the air. I just don’t think he is the greatest judge of the ball in flight, but put that footy out in front of him and his pace usually sees him get to it first. Would I like to see the mids dribble the ball to him? Don’t be silly  – ideally I’d like to see him clunk marks, but failing that, putting the ball out in front of him and allowing him to run onto it is not the worst idea in the world.

Big credit to Dayne Zorko, who provided his team with a huge lift through sheer work rate in the second quarter. He laid six tackles in this game, with two coming inside 50. He led the league in that stat last season, and it is an indication just how hard he pushes forward.

Not sold at all on Callum Ah Chee. I thought he was a battler at Gold Coast, and he’ll be a battler at Brisbane as well.

Brandon Starcevich looks a likely type. He only had it 11 times, but each of those times it seemed as though he made something happen.

Eddie Betts’ game? Eight touches for two goals – one of them a gift, is about all you can expect from him consistently. You’d take two goals, right? I understand why the Blues got him, but he is a short-term band-aid at best.

Lastly, Jack Martin… he looked really good! Had good hands, made intelligent inboard kicks and even took contested grabs. 19 touches is a good return, particularly in 68% of game time.