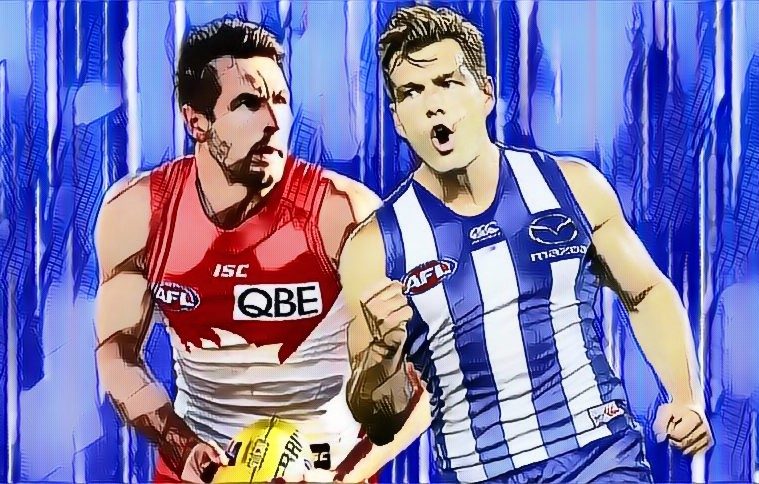 In a game that see-sawed for the first three quarters, North Melbourne was able to stifle the Sydney Swans in the last quarter to hold to and grab an 11-point victory in Tasmania.

The usual suspects were good, with Shaun Higgins and Josh Kennedy powering their respective midfields, whilst Tom Papley and Nick Larkey were able to hit the scoreboard.

Let’s check out some of the significant contributors and events from the second last Marsh Series game of 2020.

GETTING BETTER WITH AGE PART ONE

This was a belting game from the 31 year old, shrugging off the temptation to take things a little easy. Given the vital role he’ll have to play in the middle for the Swans yet again, you could forgive Kennedy for taking things a little easy in this outing.

But that’s not really the Josh Kennedy way, is it?

In perhaps the most impressive midfield outing of the pre-season, Kennedy finished with 37 touches, 22 contested disposals, eight clearances and ten tackles, working both with and without the footy.

I’ve been waiting for Kennedy to fall away in recent seasons, and he has shown signs of wear and tear. I wonder how many of his quieter games have been the result of a niggling injury or a soft tissue complaint, because he demonstrated in the last pre-season hit out of the year that he is ready and raring to go in season 2020.

GETTING BETTER WITH AGE PART TWO

Can someone drug test Shaun Higgins, please? Is he going to one of those anti-ageing clinics or something?

He continues to not only perform at a high level, but seems to be getting better. AGAIN!

… for the third straight season.

Higgins once again looked wonderful in this game, collecting 31 touches and collecting two goals as well. With Cunnington rested after half time, Higgins took on more responsibility at stoppages, finishing with eight clearances and rounding out his game with seven inside 50s and seven tackles.

In short, at 31 years old, in a practice game in Hobart, Higgins left nothing in the tank. It’s why he is so good at what he does – you know when he is on the park, he is giving it his all, each and every time.

A YOUNG GUN IN THE MAKING?

Curtis Taylor has played two AFL games, but he got a rude welcome to Marsh Series footy when Will Hayward cannoned into him in the first quarter and took him high.

We’ll cover the incident below, but the recovery from Taylor was excellent, with the young man playing on instinct, and making an impact on the game as we entered the second half.

He finished with 21 touches, two goals and really could have had a couple more, having five shots at goal for the afternoon.

This may be a little crazy, but his evasion, speed and ability to spot a teammate inboard reminded me a little of Connor Rozee early last season. How would a player like that fit into the Kangaroos system?

He looked to relish the opportunity to get into space and send the ball inside 50, and his late-game inboard delivery to Jed Anderson for a goal was the kind of action that is inherent. You cannot teach that sort of instinct.

Taylor may not quite be in North’s best 22 to start the season, but it would not surprise me at all if he is in there by the end of 2020.

THE NEW LITTLE MAN IN SYDNEY

Looking at the Sydney recruitment, I was a little concerned that Lewis Taylor would be squeezed out of the rotation this season.

He was picked up from Brisbane, and I am sure he thought that Tom Papley was on the way out when he agreed to come to the Swans. But then the Papley to Carlton deal fell in a heap, AND the Swans recruited Sam Gray as well. You can picture Taylor swearing under his breath at the set of circumstances that led him to from being the player most likely to secure the small forward slot, to being one of three forced to fight for it.

However, if today’s performance is any indication, Taylor has a bit more in his bag of tricks than I thought he did. Moving through the midfield, he amassed 25 disposals and five clearances as he put his talents to use outside of the forward 50 in an impressive display.

Is this a role he can play permanently?

The Swans will hopefully get George Hewett back for Round One, but some assistance on the outside could be just what the doctor ordered for both Taylor and the Swans.

What’s the ceiling for Nick Larkey?

Thrust into the role of main target with the absence of Ben Brown, Larkey could find himself front and centre in Round One should Brown not be ready for action.

He acquitted himself well in this game, and the experience of shouldering the load will probably hold him in good stead.

He finished with three goals from 17 disposals as he worked hard up the ground and back to provide options on the wing and deep inside 50. Remind you of anyone? Brown plays that way, using his elite tank to work over his opponents. Larkey has had a good teacher.

Larkey managed three contested grabs along the way as he more than demonstrated that he IS the answer to the question that has plagued North since Jarrad Waite retired. Nick Larkey is the second string forward the Roos need – they just might need him to be a bit more for a couple of weeks until the first string man comes back.

This was just a small teaser, but at stoppages around the ground, John Longmire gave James Rowbottom the job of stopping Ben Cunnington.

In his second season, it was a huge ask for Rowbottom, as evidenced by Cunnington’s six first-half clearances, but at points, the Sydney youngster seemed to relish the hunt.

Cunnington is a monster, and though I am sure the attention at stoppages annoyed him, he didn’t appear to be taking things too seriously  (no rib-ticklers for Rowbottom) but for the Swans, this was a valuable lesson for one of their emerging players in terms of what it takes to play on-ball against one of the best in the game.

At half time, Rowbottom had a handful of tackles – most of them trying to limit Cunners, who played the role of teacher in this one, and Rowbottom was eager to learn.

He took a while to get going, but Aaron Hall started demonstrating the kind of attributes that North hoped he’d display when they recruited him.

Hall had a horror 2019; dropped to the reserves before taking time away from the game due to mental health reasons. I watched him in the North Melbourne v Melbourne practice game at Arden Street a week or two ago, and he struggled to get into the game, but the longer this game went, the better he looked.

He applied pressure, was good on both the inside and outside, ran at 94% efficiency and snuck forward to make Dane Rampe pay for an errant cross goal kick in the last quarter.

People forget that Hall was rated as elite by Champion Data coming into the 2019 season. Personally, I don’t rate CD at all, but some do and a lot was expected from him. Could this year be the season he delivers?

He picked up 18 disposals and seven score involvements in this one, and I really hope he enjoyed being amongst it again – he would be a huge bonus to the Kangaroos if he played 15-20 games.

Will Hayward started the game like a man determined to have an impact. He collected plenty of early touches and was looking good both in attack and working through the middle of the ground.

But that determination saw him attack a contest at ground level a little too hard and collect Curtis Taylor with a forceful hit to the head and shoulder as the Kangaroo was bent over the footy.

Whilst the fact that Taylor went on to play a very productive game of footy could save Hayward a suspension, the act itself is one of the few in the AFL I really don’t like, and really, in a game with little riding on it, was completely unnecessary.

It’s not often I agree with David King, but the league needs to stop punishing the result and start punishing the act. I love a good hip and shoulder, but crunching someone high with their head over the footy is simply not on. If they’re serious about stamping this stuff out, they should be focusing on the act – not the outcome.

Hayward should think himself lucky that Taylor got up and played on. It could have been very nasty.

Nice to see Tom McCartin clunk a couple of marks this week. He looked lost in their first pre-season game, and confidence is something that can work wonders for a young fella.

Really interesting first half battle between Isaac Heeney and Jamie MacMillan. Heeney has such x-factor, but really lacks consistency (and a regular position). He kicked one goal in this one, should have had three, and had moments where he looked like the best-skilled player on the ground.

He was nursed through this game, but I am really hopeful he can make the step to become more than the pinch-hitting player he has been for the last few seasons. What Heeney is, is very good. What he could be is tantalising.

Really good game in the ruck from Todd Goldstein, who weathered the storm of Sam Naismith to bask in the sun as he got right on top of Cal Sinclair. His re-signing with North was one of the most underrated re-signings in recent history, particularly given their limited back up options.

Much better outing from Majak Daw this week, as he looked a lot more confident in his attack on the ball, and in his body. How quick did he look when he raced Papley back to goal in the last quarter! Sure it resulted in a goal to Papley for Majak deliberately knocking the ball through, but that pace… outstanding.

Trent Dumont has had much better games than this, but some of his handballs under intense pressure, and in tackles were outstanding in this game. Some players struggle to hit targets by hand when not under pressure – Dumont did it with two players all over him at times.

Very quiet afternoon from Nick Blakey. I usually love watching him play, and given that, I didn’t enjoy his game today at all.

Really nice game from Jy Simpkin, and this is more the kind of output I expect from him this season.25 touches and eight clearances are close to elite inside mid numbers, but he is yet to average 20 touches or four clearances per game. This has to be the season.

And that’ll do. Good finish to a highly-entertaining game, and a solid win for North Melbourne.