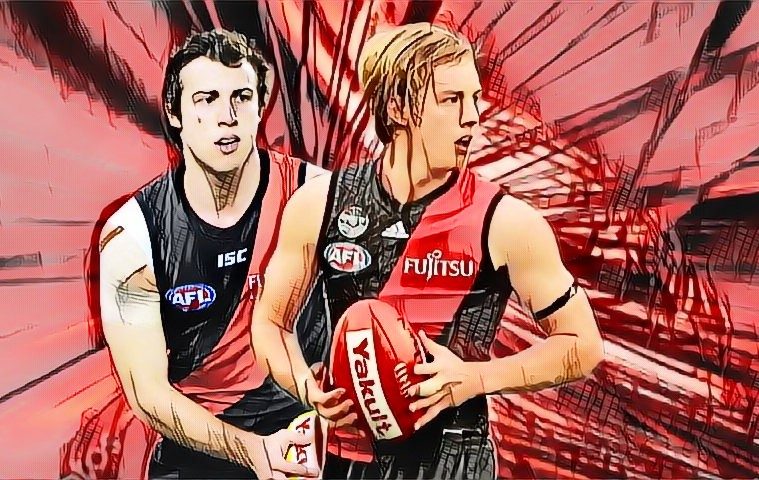 It was a strange ending to the final game of the 2020 Marsh Series.

Early in the last quarter, I chanced a glance at the score board, thinking that the Bombers were comfortable leaders in the contest.

That’s how it felt. They’d played better football and looked like a better team on the day. There were holes in the Geelong defence, and the Bomber defence had been really solid all afternoon.

Yet the score shocked me. Geelong were still in it, and more to the point, they were closing on Essendon.

With seconds to go, the Cats got the kick inside 50 and as the siren sounded the ball bounced off the chest of a leading player. It would have been robbery, if there was something other than pride at stake, but as it turns out, the Bombers used an impressive third quarter to put enough space between the teams to hang on and win it.

Let’s check out the stand out performances, and a couple who were…not so stand out-ish.

You could tell the Cats wanted to get Jack Steven involved right from the outset. Any time he had an inch of space, Geelong players fed him the ball, keen to integrate him into their system in a genuine contest.

To his credit, Steven looked up to the task. Moving freely, and carrying a lot less weight than the last time we glimpsed him in St Kilda colours, Steven was impressive without being dominant, and involved heavily  early in the game.

Things kind of settled for him, when another attempt to get him involved in the back pocket stung the Cats, as a turnover resulted in a goal to Jacob Townsend, and Steven started to fit with the Geelong game plan as opposed to having the plan change to fit him.

He finished with 26 touches and four clearances in a solid return to action, and got through unscathed.

This one would have made the Bomber fans light up, with the former number one pick moving into the guts and having a big influence on the game.

Andrew McGrath looks ready to make a midfield role his own in 2020, and will be used as the release man from stoppages. His run, carry, and ability to hit targets inside50 will be vital to the bombers as they employ their manic, forward handball game plan – more on that later.

Essendon supporters have been patient as they’ve waited for McGrath to fill out and move into a more prominent role in the team. They’ve been waiting for a four-quarter output from him, and they got it in this one, with McGrath accumulating 32 disposals, with 23 coming on the outside.

In terms of midfield runners, the Bombers are stacked. McGrath, Shiel, Heppell and Merrett could cause nightmare if teams allow an open-style game. They won’t want to, but if the Bombers can control the tempo, they may not have too much say in it.

He finished with 3.3 and had a purple patch in the third quarter that kick started the Essendon scoring.

Darcy Parish has long been mooted as the inside mid the Bombers need, but the 23 year old showed another side of his game in this one; that of a finisher. He looked dangerous, was clean with the ball in hand, and really should have had a bag of five.

With players around him drawing heat, Parish slipped under the guard of the Cats defence a  couple of times and punished them in the best way, although one of his goals did eventuate by way of a particularly soft 50 metre penalty.

Could we see Parish drifting forward similarly to the way Stephen Coniglio does at GWS in 2020? His highest return for goals in a season came last year, with 12. 20+ should be on his radar this year.

Look, having a cool name is one thing, even if Jonathon Brown continually screws it up, but backing it up, playing in front and winning your contests as a key defender… that’s the kind of thing that makes people remember you for your play, and not just because they like saying your name.

Zerk-Thatcher had 18 touches and 12 intercept possessions as he found himself in the right spot over and over, thwarting the Geelong attack way too often for a player with one senior game to his name.

His combination with Michael Hurley was rick-solid in this one, and with Cale Hooker on the sidelines, he probably just played himself into a Round One selection.

Now this is the role where Hurley thrives, and you can see the conundrum that John Worsfold has had with both Hurley and Hooker in defence. I may get shouted down for this, but I reckon they tend to get in each other’s way at times, and both play their best when they play the role of general in defence.

So, you move Hooker forward, right? That’s the obvious solution?

Well, it’s not THAT obvious, because Hooker tends to be wonderful when he is moved forward DURING a game, but when he starts forward, he struggled to take control of the game. It’s one of those weird stat-driven things, but I remember this being a talking point last season.

Hurley was dominant today. His 32 touches were all class, and his 13 intercepts made the combination of him and B-Zerk as good as any in the league (on this day, at least).

So, do the Bombers bite the bullet, trial the Hurley/Zerk-Thatcher combination and allow Hooker to come back as a forward and hope like hell he performs? It certainly helps with the Joe Daniher absence. And Hurley as the defensive general… it just fits!

DANGER, AND A VALUABLE LESSON

When you are opposed to one of the best players in the game, you go 100%. You don’t dilly-dally around, try running at three-quarter pace and see what happens. You give it everything. You throw your body in the way and try to impede him, and if you get beaten, at least you know you were beaten by a better man.

I hope he learns that lesson stemming from a last quarter race for the ball that saw Danger start a metre or two behind Snelling in a 15-18 metre race, and beat him to the contest so comprehensively that he took possession, handed off to Zach Tuohy and set up a goal to Gryan Miers to pull the Cats within striking distance.

Danger is a beast. He is constant, and is always a threat, and in this game looked like the most dangerous player on the park. He didn’t have too many mates, though.

Andy McGrath got to run around opposed to him for a while – a valuable learning experience as the young mid refines his craft. If he was watching closely, he would have watched the Brownlow Medallist rack up both contested and uncontested touches, grab 33 touches, ten score involvements and eight clearances in a wonderful display from a powerhouse midfielder.

This was just one effort on a day when Mason Redman did his job.

His dual efforts in the first quarter, tackling one player and then buttering up to drag down Gary Ablett and earn himself a free kick are the kind of things that make selectors sit up and take notice.

As if the Bombers don’t have enough pace from half back, Redman offers someone who can defend in the air and hit the ground running. After establishing himself as a mainstay in the Bomber line up in 2019, his presence in 2020 will continue to enhance a solid defensive unit.

The way he came on in 2019 made me start thinking just how big a loss Conor McKenna would have been had he opted not to return this season. I reckon Redman would have picked up that slack and made real strides  in the role.

This might be the last time we see James Parsons as a Geelong player.

Seriously, the guy has all the tools, and does a couple of things right, only to completely cock things up. He had five effective disposals in this game as he bumbled his way through another uninspiring effort.

When the Cats don’t see improvement, they cut the cord. George Horlin-Smith, Jordan Murdoch… they’re stinking it up at the Gold Coast. James parsons would feel lucky to join them after this season…

A BIT OF MONGREL

Last week it was Dev Smith bringing the Mongrel.

This week it was Jacob Townsend.

Injuries stopped him from forcing his way back into the Tigers side of 2018-19 after his stellar finish to 2017, and when the Bombers signed him, they knew they were taking a bit of a risk.

If they get this version of Townsend, the risk was well and truly worth it. His three goals were one thing, but his intensity and attack on the contest were fantastic, and if he lines up for Round One, you know he will leave nothing on the park.

Townsend is an x-factor  but not in the traditional goal sneak way. He can bust packs, drag people down in tackles, or iron them out. What team wouldn’t want someone like that?

Hawkins looked dominant early, and I know Bomber fans won’t like this, but I really feel as though he took the foot off the pedal. When he is ‘on’, I’m not sure Hurley, B-Zerk or anyone can handle him in defence. The way he dismissed Aaron Francis to mark strongly was just a taste of what he is capable of.

Really good start to the game by Tom Cutler, whose long kicking could be the sort of weapon that can penetrate a good defence. Interesting to hear Jon Brown talking him up during the broadcast – he could be a real weapon if he gets the ball out in space.

Gary Ablett looked a bit frustrated, but when he gets the ball, the Geelong forwards eyes light up. He can still use it as well as anyone. I guess he’ll just be using it a lot less this season. He played both Marsh Series games… and I can’t understand why.

Quiet games for both Fantasia and McDonald-Tipungwuti indicate that there is a heap of improvement in the Essendon forward 50. Is it me or does fantasia look too thin at the moment?

Half a game for Josh Jenkins – he strikes me as a player who needs to warm into a game. I’m not sure there is value in plonking him out there after half time and hoping he will get going quickly. I still think he can be really effective for the Cats, but not unless they invest in game time.

And that’ll do for this the last game of the Marsh Series. Let’s get stuck into the real stuff! Can’t wait!