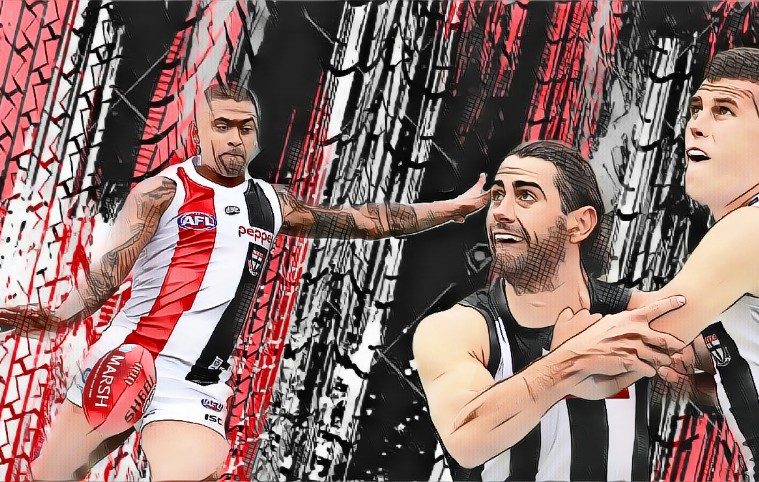 Footy came back to Morwell in the form of the Marsh Series as the Saints and the Pies locked horns in their final pre-season hit out before the real stuff starts, and whilst we saw many stars resting before the end of the game, some of the big guns strutted their stuff before retiring to the pine.

The Saints used a last quarter surge, and four goals by Jack Lonie for the second straight game to get them over the line and instil both a sense of hope, and a sense of pride in the team as they prepare for a Round One showdown with the Kangaroos.

Let’s check out some of the highlights of the game.

Now, this was interesting.

Here you had the alpha, the king of the hill, the seven-year man, Brodie Grundy. If the rucks all wandered into a bar together, they would probably defer to Brodie Grundy. He has obtained the status as the best ruck in the league and set new standards with his endurance and second efforts.

But one of the blokes watching him, and emerging as a challenger to that throne took the fight up to him in this game, and he brought some back-up with him.

So, a lot of people said I was too harsh on Tim English last season when I wrote about how Grundy abused him in contests. They cited his age and experience. In return, I cited the age and experience of Rowan Marshall. It was check, and mate!

Marshall simply refuses to be pushed around, and in a game where there were lots of pats on the backside, and lots of good-natured by-play, seeing Marshall take his contest with Grundy seriously warmed the cockles of my heart… as that is where I keep my cockles.

But where Grundy had to rely on makeshift ruckman, Mason Cox to relieve him, Marshall had a bloke that was also looking to make a point.

Paddy Ryder looked leaner and more athletic than he has been since his 2017 All-Australian season. He also took the fight up to Grundy, and would not allow the All-Australian ruckman to have his way.

Grundy still managed 34 hit outs, but was restricted to one clearance and just 13 possessions. Marshall had 15 possessions to go with his 18 hit outs, but added five clearances to his name, whilst Ryder had 20 hit outs and four clearances to go with his eight disposals. This is what the Port Adelaide duo of Ryder and Scott Lycett was supposed to do last season, and all it took was Ryder’s move to Moorabbin, and a brand new partner in crime for it to all come together.

Look, this is a little unkind, particularly given Jordan de Goey was pretty damn effective in this game, but there was a point in the second quarter where he was running through the middle in the background… he was shuffling along, actually, and with that bright blond hair and a body that is very solid…

I thought Nathan Buckley had pulled a fast one and brought the Horsham rocket out of enforced retirement. Alas, it was just de Goey. I mean, Stauchanie can’t take hangers.

The enigmatic star picked up 18 touches whilst playing 73% of the game, resting most of the last quarter. He hit the contest hard and looked dangerous going forward. I’m not sure whether I like him spending 70% of his time in the middle. I think he is best when he can go into the guts after freshening up inside 50 for ten or so minutes a quarter, capitalising on the relative fatigue of his opponents, but Nathan knows best, and if de Goey needed the extra time in the middle, there was no better chance to give it to him than this.

I also believe that Jaidyn Stephenson is a much better player with de Goey inside 50 with him. Those two seem to combine well, and having Stephenson in there without his big, bullying buddy… well, it leaves Stephenson as the weedy little bloke waiting to be picked on, which is what happened today.

THE START OF MAX KING

I don’t want to buy into the hype – right now I would prefer his brother in my team, with 12 months experience under his belt if I were forced to pick from the twins, but you can’t help but like the way Max King attacked the contest in the first quarter.

It took the Pies a little while to work out that they needed to put a body on him in his approach to the contest to offset his momentum, but until they did, King looked like he could take on the world.

His kicking at goal… well, he could use some work on that, evidently, but overall, if you’re a Saints fan watching this kid in the pre-season, your eyes would be lighting up. He’s wearing a decent player’s number, and the start to his career at St Kilda, now that he is on the park, might just have been worth waiting for.

Well, I went out on a limb and stated that I believed Dougal Howard would be the recruit of the season, and after his second Marsh Series outing, I am feeling pretty content with that statement.

He won’t get the most footy of players on new teams. He won’t generate the most headlines, but what he will do is kill contests and take intercept marks.

And that’s what he did today.

Matched up against Mason Cox, Howard had a good time patrolling defensive 50, gathering a game-high ten intercept disposals and finishing just one spoil away from the defensive double-double, with nine big fists meeting Sherrin.

Howard has the ability to be a complete game changer for the St Kilda defence, able to take big marking forwards out of action and continue to send the ball back from whenst it came. Not only did he contest in the air well, he also made the most of it when the ball came to him, gathering 16 touches for the game and running at… oh, just the 100% efficiency.

Jake Carlisle and Nathan Brown will eventually be in this back six, but today, the Saints saw the future of their defence, and his name is…. DOUGAL!

I got called out for not mentioning the efforts of Josh Daicos in week one of the Marsh Series, and on reflection, I should have. See… I listen.

He was good again in this one, roaming around the midfield to collect 22 possessions, using most of them wisely.

More of an outside player at this stage, Daicos was able to find space in a highly contested game and drift both back and forward to assist his teammate. Often taking the time to look before delivering, Daicos, combined with the Brown boys on the run on a couple of occasions in efforts that would’ve made those around in the early nineties smile with pride.

His development is coming along nicely, and whilst I don’t expect him to cement a spot in the best 22 immediately, there is a solid chance he will do so by the end of the season.

There was a time when I thought moving Jeremy Howe to defence was a bit of a mistake. Yep, I’m an idiot.

He was young, with springs in his heels and it seemed as though he would rather sit on someone’s head than take a chest mark. The latter may still be the case, but his development into one of the elite defenders in the game is testament to Nathan Buckley’s vision, and Howe’s commitment to be the best player he can be, irrespective of the position he plays.

He had 25 disposals in this one, running at 88% as he read the ball beautifully and used body positioning to break even when he couldn’t glove it. He played on Tim Membrey early in the piece and I was hopeful we’d see them tangle all day, but given the nature of the switching defences, that wasn’t to be.

Howe’s skills with the footy in hand make him a dual threat both in the air and when he is designated as the kicker out of defence. He had eight Rebound 50s in this game as his cool head, and… dare I say it…wisdom in defence has the Pies in safe hands.

His combination with the no-fuss Jordan Roughead is one of the more unsung defensive duos in the game.

Jack Steele looked stringer than last season, out there today. If he has put in some hours in the gym, it soon became apparent in this one, as he nailed tackles left, right and centre.

Whilst some are organically better at dragging players down, I still believe that tackling is an effort stat. you have to take some pride in the fact that when you encounter the opposition with the ball, there is going to be no stepping out of your grasp.

That’s how Jack Steele plays the game, but unlike purely defensive players, he is able to collect the footy, himself. He had 24 touches and six clearances to add to his stellar defensive midfield work, and I am starting to see some real elements of Elliot Yeo in him at this point.

Steele averaged 8.2 tackles per game in 2019, and if he can match that again, with added depth around him in the midfield, his hard work may just pay off in a big way.

Oh and that tackle on Chris Mayne… brutally beautiful!

Brad Hill got plenty of it in this one, but unlike his first Marsh Series matchup, he wasn’t afforded the same space to get out and lace out the ball to forwards.

Really hating this dangerous tackle rule – Taylor Adams was pinged for free kick for his tackle on Jack Steele, and Steele had his hand free. That he decided to hold onto the footy should not be reason enough to penalise Adams for executing a ripping tackle. When the player with the ball contributes to having their head hit the ground, there should be no free kick. This has the potential to change our game, people… I don’t like where it’s headed.

So, last season, the heralded Magpie midfield consisted of Grundy, Pendlebury, Sidebottom, Treloar, Adams, and Beams. At one stage in the middle today they had Crisp, Daicos, Jamie Elliott and Grundy. Amazing how quickly things change.

What a first quarter from Scott Pendlebury, picking up the average 14 touches. Seriously, there would be players happy with those numbers for the entire game.

Plenty of class around goal in this one from Steele Sidebottom, and Chris Mayne was the bloke usually handing it off to him.

Dan Hannebery got through okay, and I did like his vision on a couple of inboard kicks that less-confident players wouldn’t attempt. Has lost more than a yard of pace, but footy know-how cannot be replaced so easily. Hope he pulls up okay.

Great to see Dylan Roberton running around again. He looked good early, and played over 80% of game time so they must be pretty confident he is all good to go. It’s like getting another seasoned recruit for the Saints.

Finally, a very nice outing for Ben Long, who looked balanced and in control off half back. It looks as though Brett Ratten might throw him the keys and get him to drive them out of defence at times this season. 24 disposals at 88% efficiency is a great return.

Nice win by the Saints. A bit scrappy at times, but playing in the bush… shit happens. The Pies had plenty of talent on the pine, and they will be better for the run, but those Saints… they’re learning how to play with each other. And quickly, too.