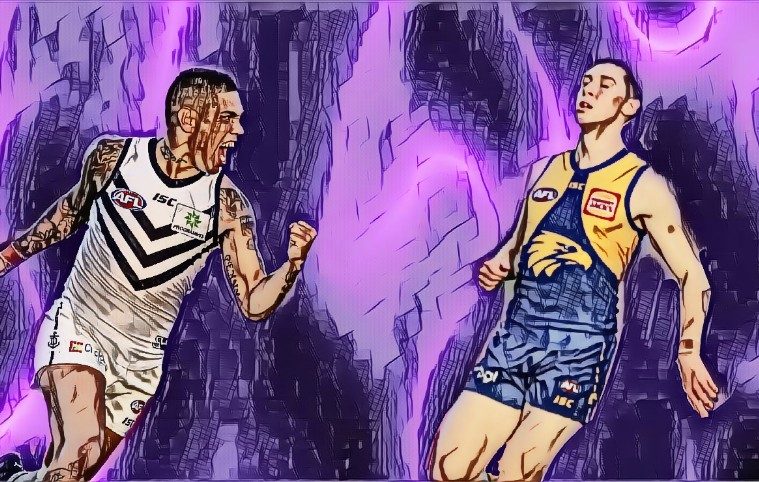 Was it worth the wait?

The Fremantle Dockers and West Coast Eagles played a glorified game of keepings-off for three quarters before both teams turned up the heat in the last quarter to put on a grandstand finish.

Look, I won’t lie to you – this game was absolutely ugly at points, with so much of the game being played between the arcs as several players looked to be going in second gear and flat-out refusing to open things up.

It was scrappy, it was… Un-Derby-Like, and it was not a great advertisement for our game…

And then we had a belting last quarter to make it up to us.

Was it worth the wait? Was the last quarter enough excitement to make the first three quarters worthwhile?

Let’s explore as we check out the standouts from the pseudo-derby.

With less than a minute to go, the ball spilled inside West Coast’s forward  50, and Liam Ryan, who looked dangerous all game, swopped on a ball with the goals in his sights.

This is where Adam Cerra comes into it.

Ryan looked set to goal and give the Eagles the lead. It was kind of scripted – Ryan had been one of the few players that looked dangerous in the first three quarters and had not fallen into line with either the conservative style both teams were employing, or the fumbly, three-stooges-esque antics that players were enacting when they had the ball.

He looked the part, and looked as though he was about to punish the Dockers.

But Adam Cerra didn’t give up. With Ryan straightening up, a desperate lunge from Cerra upset him, and off-balance, Ryan offloaded an awkward handball that was gobbled up by Brennan Cox. The ball rebounded to a teammate and the game was saved.

It wasn’t much. It wasn’t a blistering goal on the run, or a snap around the corner under great pressure. It was a lunge; a desperate, all of nothing lunge that just upset the Eagles star enough to cause a turnover.

Sometimes the little things make a big difference, and in a season where big things are expected from Cerra, it was a little thing in this game that mattered most.

Is he the new Hayden Ballantyne, or is he just a very naughty boy?

It’s hard not to like what Lachie Schultz is bringing to this Fremantle team. A bit of mongrel goes a long, long way when you can back it up, and whilst Schultz made his share of mistakes in this one, and will make plenty along the way this season, he has more than earned his spot in the Round One side with two weeks’ worth of down and dirty, scrounging in the dirt kind of efforts.

Schultz makes things happen. You can tell he knows footy – he is not an athlete that converted to the game; he is a footy head. He gets to the right spots, isn’t afraid to put his head over it, and realises that in order to make an omelette, you’ve gotta crack some eggs.

He is the sort of player that I can see being beloved by the Fremantle faithful, and absolutely despised by opposition supporters.

And I reckon he’ll love it.

Welcome aboard, Lachie Schultz – I hope you have a big year.

After Josh Kennedy slotted home six goals last week, it appeared as though the Freo defence would have their work cut out for them.

Logue had the kind of performance that would earn him maximum coaches votes, and held Kennedy to one goal whilst slotting in for eight intercept possessions. He outpointed a sluggish looking Kennedy on several occasions, but the West Coast forward received no favours from his midfield, who consistently butchered the ball in the first half.

Kennedy left the game and Logue continued on his merry way, winning a vital one-on-one marking contest with Tom Barrass late in the game.

Logue was the number eight pick in the 2016 draft, but injury has conspired to keep him out of the Fremantle side for long stretches. After seeing what he is capable of in 2019, and in the 2020 pre-season, I am hoping for a sustained run of health for him as he holds together an injury-riddled Docker defence.

You could see Elliot Yeo was still working out the kinks in his game in this one. He fumbled a bit, dropped a mark or two, missed opponents in better position occasionally, but even with the negatives, you cannot help but notice the positives.

Yeo, (whose name continually autocorrects to “yep” on my phone, and I never change it because what about if I respond quickly to someone by saying “yep”, and it corrects to “yeo”?) was a beast in the contest, racking up eight clearances as part of his 33 touches for the game. he added the standard seven tackles and looked like a player who actually started giving a shit late in the piece.

Yeo powered the Eagles inside 50 eight times as he was the only player to reach the 600-metres gained milestone in this game.

He came within three touches of his career-high for disposals, and his last quarter running goal looked to ignite the Eagles. He looks to be in for a massive year, and whilst he is definitely respected around the league, this season may be the one when any people slow on the uptake finally realises that despite all the talk of Nic Nat or the arrival of Tim Kelly, West Coast have a genuine superstar in the middle of the ground.

And his name is Elliot Yep… damn this phone!!!

Bailey Banfield had a day that would have been rather forgettable had he sat out the last quarter.

He was sparked into action when Luke Shuey seemed to take his sweet time getting off him at one stage. I liken it to Allen Iverson stepping over the fallen Tyron Lue in the NBA finals all those years ago. Banfield was down, Shuey was on top of him and he was lauding it over him.

Banfield reacted in two ways. He got to his feet and unceremoniously dumped Shuey – an action some thought should have incurred some attention, and then he hit back in the best possible way; with two goals to power the Dockers home in the last quarter.

Banfield strikes me as a player the Eagles do not like. In a game that was largely without spite, there was a little reserved for Banfield, which I found interesting. If anyone has some history on this, I’d love to hear it.

Banfield’s second goal, as he was knocked to the turf was an absolute belter – a sky ball that may have hit the roof had this game been played at Marvel Stadium, and perhaps his performance was a metaphor for this game. Ordinary for three quarters, then sparked into frantic action.

I was ready to write Sean Darcy off when he went down, clutching at his lower leg early in the game.

“Here we go again,” I thought, but when he came back on the park, I kind of started digging what Darcy was doing for Fremantle.

Let’s skip to the second half, because when he came back on in the first half, he was tentative and looked as though he was a little bit timid about contesting, but the more the game wore on, the better he got.

I am not sure how fit Nic Naitanui is, but Darcy was matching it with him in the ruck, and even started picking up disposals around the ground. This is where you can hurt Naitanui – he is not often overly productive around the ground.

Darcy played 50% of game time and still managed to collect more of the footy than Nic Nat. he was probably a finish away from actually taking the points, but Naitanui’s late goal and Darcy’s misses are the sorts of moments that people remember.

THE ROLE OF GAFF

This is something I saw coming – I’m blowing my own trumpet a little here.

The addition of Tim Kelly into this midfield is about to have an enormous impact on the effectiveness of Andrew Gaff.

Gaff is an outside runner – he will power along all bloody day if you let him. He is not an inside worker, but at times last year, particularly early in the season, he was forced into the role of contested ball winner at stoppages. It is not his wheelhouse.

With Tim Kelly in the mix, Gaff has retreated to playing a possession or two off the contest, and in this game it was evident how potent he can be in that role. He had 23 uncontested touches and ran at 88% efficiency in a game that was sloppy. Whilst I’d like to see him run, carry and deliver long a little more, this was a nice segue back into a role he is very comfortable with.

As his teammates pick up the slack and become a little cleaner with the footy, I expect Gaff to have several games with 700+ metres gained this season. Today, he had just 336. It’ll come – just be patient.

Nice game for Liam Duggan. He really benefitted from that scramble that was the first three quarters, mopping up a heap of loose footy in the defensive half. 27 uncontested touches is ridiculous.

Should Freo stick with Walters in the forward line, or in the middle. He is such a crafty player that it is hard to rob yourself of one option to provide more of another. What I would like to see is more of an attack on the footy and less of a con-job at trying to milk free kicks. I reckon the umps are onto him now – time to win the hard footy and show them you don’t need whistles to win contests.

Jack Redden would be a top three midfielder in at least five other teams in the league. Maybe more. Carlton, Hawthorn, Gold Coast, Freo, Sydney – there’s five. They’d kill to have him. West Coast are blessed to have that kind of depth in the middle.

Geez, Freo missed Fyfe a lot when he led at the footy. You could see the resignation in his eyes on a couple of occasions. He was wide open and Bewley missed him by almost 15 metres at one point – would be very frustrating.

Heard a couple of people lament Caleb Serong’s rushed kick forward in the last, where he appeared to throw it on the boot and hope. That’ll happen when a young bloke is under pressure. What I did like was his great tackle to dispossess Luke Shuey in the last quarter. That got the ball rolling and ended with Michael Walters slamming through a goal to really drag the Dockers back. Again… the little things.

And that’ll do. Nice win for Freo. Horrible first three quarters and a ripping finish to restore the faith.