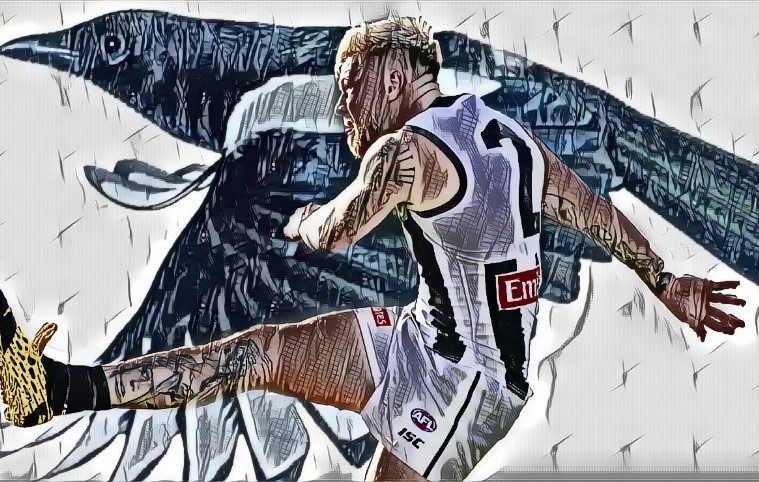 The Tigers and Magpies went bush in the latest chapter of their modern rivalry and gave the locals at Wangaratta plenty to get excited about.

Despite a large number of stars missing due to the Bushfire relief game on Friday evening, players like Jordan de Goey, Mason Cox, Adam Treloar, Dylan Grimes and Dion Prestia all strutted their stuff for the locals and had a solid hit out, with a few of the boys not afraid to throw their weight around.

Here are the stand outs from the game.

Look, it may be a worst-case scenario that we see a bit of Darcy Cameron in 2020, because that’ll mean Brodie Grundy isn’t playing, and that wouldn’t be good for the Pies.

But what we saw from new recruit, Darcy Cameron was probably enough to make people think that the world won’t stop spinning if Grundy rolls an ankle or something.

Cameron snagged a couple of goals and dragged down five contested grabs as he seemed to enjoy running around at the highest level. Whilst one game in three seasons with the Swans may not be representative of his ability, I am sure Collingwood fans are hoping that they don’t need Cameron to play like this at any point in 2020.

But if he has to move into the ruck to spell an ailing Grundy, an outing akin to this one would soften the blow.

WHERE IS THE BEST POSITION FOR JORDAN DE GOEY?

So, de Goey spent the majority of his game patrolling forward 50, but when injected into the middle of the ground, he started to have a big impact.

Two of his three goals came on long bombs from outside 50, and he just looks more comfortable at the moment running at the goals than leading away from them. He clunked a big contested grab in the last quarter, but it was his work at the centre bounces that was the highlight of his afternoon.

He took a big check from Dylan Grimes in the second quarter, as the ball went over his head and de Goey appeared to give up on the play. Grimes just looked as though he wanted to remind him he was around. It was a little bit cheap, but I kind of liked it anyway.

It was the second solid hit de Goey copped for the game, finding himself on the end of a Marlion Pickett bump in the first quarter as well. That one left him shaken up.

All in all, it was a solid hit out for the Pies star. Signs of his match-winning ability were very apparent in patches, and if he can get through the rest of pre-season unscathed, he will be a decisive factor in 2020.

Gotta give Adam Treloar credit – he only knows one way of going about things.

After accumulating 34 touches and leading the game in clearances, Treloar overdid it in stretching for a mark on the boundary. He tumbled to the deck and got up feeling the back of his left hamstring.

Was it at the conclusion of 2018 that he managed to tear both hamstrings stretching out as he tumbled forward on the boundary? While this one was a little more controlled, he seemed to strain something back there, and was pretty annoyed at himself on the bench.

We’ve all been there, and the regret and “what ifs…” would be filtering through his mind. He is a huge loss for the Pies should he miss the start of the season, which seems likely. He is a guaranteed 30 touches per game, and this kind of result is exactly what coaches hate seeing with the season a few weeks away.

Liam Baker has kind of pushed and shoved his way into this Richmond side, and with performances like this, they’ll have a difficult time removing him.

Baker had 30 touches in this one, His career-high in a home and away game is 24, so Tiger fans would be pumped with his efforts here. I seem to recall him starting as a small forward and then shifting to defence in his time at Punt Road (happy to be corrected) but this output was something I wasn’t really expecting.

The Tigers have made a bit of a habit out of bringing in players and making them better, and Baker is another of these types. He is hard at it, buys into the Richmond pressure, and today he provided Damian Hardwick with yet another option to exercise should things need to be re-jigged during the season. I could see him excelling this season and becoming a real weapon off either half back, or as a pinch-hitting mid. He is not glamorous or flashy, but he is up for the fight and I’d be willing to put money on him having a couple of big outings this season and really cementing his place in this Richmond side.

Speaking of forcing your way into the side…

John Noble, who,  along with premiership player Marlion Pickett still doesn’t even have a photo on the AFL app, (lift your game, AFL) showed incredible poise in his role at half back for the Pies in this one.

At half time he had 17 touches to his name, and though he tapered off in the second half, it would be gratifying for Nathan Buckley to see the way this man, who was selected in the mid-season draft last season, has continued to refine his game.

He had 20 uncontested touches as he peeled off to provide options for his fellow defenders and played the role of link man to a high level.

So, Marlion Pickett had four free kicks against him in this game, and really, you could look at his output as a whole and think he had an average outing. I suppose, if we’re looking at the entirety of the game, he did. However, if we look at his game in moments, it tells a different story.

Pickett sat the Magpie star, de Goey, down in the first quarter, and some of his runs through the middle were scintillating. Seriously, I am not sure I have seen someone cover the ground as effortlessly as he did early in the game. He also made tremendous ground to make spoils and though this game was nowhere near the level of his Grand Final debut, there is still plenty to take away from it in terms of what Pickett can provide the Tigers this season.

Looking at this team, with Pickett in there, Baker elevating his game, Jack Ross showing signs and Sydney Stack indicating that last year was just an entrée, there is plenty to be excited about at Punt road.

So the Pies ended up with a hospital wing full of tall defenders in 2019, and they have taken steps to ensure they have contingencies in 2020. One of the moves has been the acquisition of Mark Keane, who slotted in alongside Jordan Roughead to provide a solid defensive pillar for the Pies in this one.

He topped ten intercept possessions and took three contested grabs in a very impressive outing, and more importantly, didn’t try to bite off more than he could chew with the ball in hand.

You could see Mabior Chol getting a little frustrated with the way Keane was spoiling him early in the game, and that is something you just can’t teach. You can teach players how to play, but getting under the skin of their opponents… that’s something you’re born with.

NO WONDER THEY GAVE HIM A CONTRACT EXTENSION

Memories of Chris Mayne’s painful first season at Collingwood are all but forgotten now, aren’t they? There was a time when his signing was viewed as one of the biggest errors the Pies had made in recent memory.

Mayne has well and truly put that to bed. The criticism he endured must have stung. People were questioning his worth, and whether he was worth anything at all, let alone what the Pies were paying him.

Fast forward a couple of years and those people are now pretty silent. You can tell that Mayne has worked his ass off to become better, and he now slots into this Collingwood system effortlessly… actually, that’s not quite right. It looks effortless, but the work Mayne does is all about effort – it is the main driver of his game.

He finished this one with 24 uncontested touches amongst his 31 possessions, and was as good a link man as Collingwood had all game.

Hats off to Chris Mayne. He has rewarded the believers and proved the doubters wrong. It must feel great.

Interesting to see David Astbury allowed to get away with going studs up in a marking contest. You just know that Jack Riewoldt was cursing him. Didn’t Jack cop it twice in the same game last season?

Absolutely brilliant to see Jack Higgins out there running around again. He will be like a new recruit for the Tigers this season… as if they needed to add more quality, right? Bastards…

This is probably the best I’ve seen Mason Cox look since he went to town on the Tigers in the 2018 Prelim. Four contested grabs were a nice reward, but it was more the way he ran and launched at the footy that made me smile. Incredible that the Tigers once again didn’t bother to put a body on him as he made his way to the contest.

Wouldn’t mind seeing Jake Aarts getting a bit of a run at it this season. Looks like he has a footy brain, and seems to be thinking a step or two ahead of the play. Only played 38% of the game, so I am not sure that we’ll see too much of him this season.

Good to see Brody Mihocek getting involved and rediscovering his confidence. His last game for the club was abysmal, and can be the sort of experience that saps a player of self-belief. Not so for Mihocek, who took ten marks and set up two goals with direct assists.

And that’ll do for this one. A really good opportunity for some young blokes to stand up in the absence of some stars, and it was great to see players like Baker, Cameron, Keane and Noble all grab hold of that opportunity.