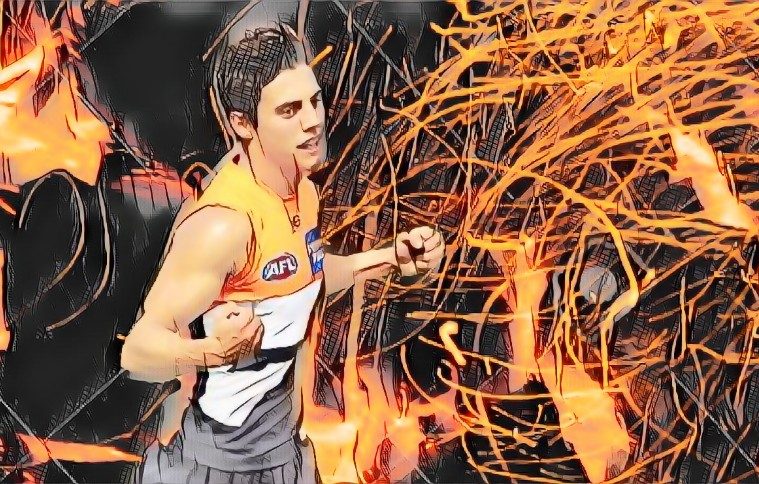 If this was a battle of the bridge, a crosstown rivalry or even a meeting of teams who had a mild dislike of each other, you wouldn’t have known it.

Such is the nature of some pre-season contests.

In a 94-point drubbing, one Sydney team gave the other a complete belting, and was probably representative of where they sat on last season’s ladder. With both teams missing some big names, it was a great opportunity for others to step up and make a claim on a Round One spot.

And some did exactly that.

Here are some of the stand outs from the game.

Taylor ruled the skies and found himself in the right position more often than not as he was the only player on the park to compile a game with double figures in intercept possessions.

During the game, we heard both Cam Mooney and Dermott Brereton talk about how Davis was grooming Taylor (in the best possible way) as his replacement in defensive 50, and watching the way he conducted himself late last year, and in this game, it’s difficult to think of a better option.

With Tim Taranto out of the game in the first five or so minutes, and the GWS midfield missing quality like Coniglio, Ward and Whitfield, an opportunity sprang up for a kid to show his stuff and put his hand up for a Round One berth.

That kid was Jackson Hately.

Reminding me of a young Ollie Wines, Hately collected 25 touches and seemed to hit a target every time he got his hands on the footy. He was composed, made intelligent decisions with the footy, and was in no hurry to move it along when he got it – the poise he displayed as he ran through the middle to draw players to him before dishing off was the kind of play more akin to someone with 100 games under his belt.

If this game is anything to go by, that number will increase dramatically in 2020.

A GLIMPSE INTO THE FUTURE

It took Tom Green a quarter or so to find his feet, and come to terms with the speed of the game.

He learnt lessons quickly – you cannot simply step through traffic at this level., and if you try, you’ll be caught. But in the process of learning, he taught a few people some lessons of his own.

His hands are excellent, and I don’t think I saw him double-grab anything for the entire game. His clearance work was wonderful – he had six, and he led the game in contested touches. As strong as players who have had years in the system, he was able to fight through tackles to release the footy at points, when others his age would have been buried.

The fact he was still up and running as the last quarter wound down indicates that he could be cherry ripe for an early-season debut, and it is no wonder the Giants wanted to move up in the draft to ensure they were able to get Green with their second pick. In doing so, they got him for a bargain and picked up Lachie Ash, who we’ll get to in a moment.

LANGDON GETTING AMONGST IT

So, two reliable avenues were either in the grandstand or hanging out elsewhere, with Toby Greene and Jeremy Cameron playing in the Bushfire Relief game the previous evening. Many thought it would be Harry Himmelberg or Jeremy Finlayson with a bag of goals in their absence, but Zac Langdon hit the scoreboard, and hit it hard.

Langdon had three goals in the second quarter as the Giants pulled away from the Swans, and opportunistically bobbed up again later in the piece to round out his goal totals. Usually looked at as a pressure forward, Langdon demonstrated there is more to him than whatever the media can label him as he had his way with the Sydney defence.

His career-high in official AFL outings is three goals, which gives a good indication just how well he performed in this game. He was ultra-dangerous both on the ground or in the air (three marks inside 50) as he powered the Giants forward line home.

Did you take much notice of him? That run and carry off half back was blistering at points, and he looked like a complete natural.

With 17 of his 19 disposals coming uncontested, Ash looks like a wonderful back up to Lachie Whitfield as either a wingman, or a running half back, and part of me wonders whether he is valuable insurance should Zac Williams decide to look elsewhere for a more permanent midfield opportunity after this season?

Whilst Ash did not have the greatest individual impact on the game, his ability to defend and hit the ground running were attributes that really stood out. GWS were so high on him that they traded to move up to ensure they could get him before having to bid on Tom Green.

It was a wise move.

You guys know I like a bit of mongrel in players, and when Will Gould decided he was going to drop Matt de Boer in the first quarter, he made everyone sit up and take notice.

To his credit, there was no bitching or complaining from de Boer – he is tough as nails and got straight back up to enjoy a pretty stellar outing, but the intent of Gould is one of those things you simply cannot teach. He craves the physical contact AFL provides… he is like Joe Ganino on a crowded bus… always wanting to make contact, whether people like it or not.

Gould was caught out a couple of times as experienced players bamboozled him (Finalyson at a ball up cost the Swans a goal) but overall the positive far outweighed the negative for him. The Swans have a keeper here.

SWANS GET A RUCK DUO

I am sure that Sydney breathed a huge sigh of relief seeing Sam Naismith out there for the majority of the game, and competing very well against Sam Jacobs.

Two teams were horrid in the ruck in 2019 – the Western Bulldogs, with Tim English woefully overmatched against grown men, and Sydney, with Cal Sinclair forced to do 95% of the rucking as Naismith sat out.

It looks as though Sam is back in the saddle, and that makes the Swans’ overall ruck division so much stronger.

He led this game in hit outs and probably should have hit the scoreboard at least once. His combination with Sinclair has the potential to give some teams a few worries in 2020.

It’s a good thing the GWS bat so deep in the midfield, isn’t it?

That said, I really hated seeing Tim Taranto cradling his arm as he gingerly moved off the field so early in the game.

Taranto was incredible in 2019, standing up as so many of the GWS midfield fell down. He was rightfully crowned their best and fairest last season, and would have been looking at a move into the AFL’s true elite this season. That’s not to say he can’t, but a shoulder injury a few weeks out from the start of the season is a real kick in the pants.

My fingers are crossed that he can get back quickly as re-assume his role as one of the best two-way midfielders in the game.

Jye Caldwell started well but while other young players showed they may be ready to step into the team sooner rather than later, Caldwell still has a bit to prove.

Loved the game of Matt de Boer. Usually, when a player in the role of de Boer doesn’t have an assignment, they become faceless contributors at best, but de Boer was excellent in this game. Without anyone to tag, he was free to roam around the ground, doing as he pleased en route to 27 and a game-high nine score involvements.

The health of de Boer is one of the keys to the 2020 GWS season, as there is no better stopper in the game, but it was nice to see him run around out there without having to zero in on one player for the whole game. he looked like he was having a good time.

Sam Gray showed me enough to make me think he will be a regular part of the Sydney forward line this season. As much as I think the future is in the hands of ben Ronke and Will Hayward up there, Sam Gray provides Sydney something right now, and it will be only in the second half of the year that he may be ousted as the smaller forward/half forward if Sydney are not looking like making finals. At that point, John Longmire may want to put more time into the younger guys.

Jordan Dawson… he seems to do what he does so easily. Seven intercept possessions and seven rebound 50 possessions were key amongst his 19 touches for the game.

Great courage from both Harry Himmelberg and Aliir Aliir to recover from their big collision. I thought Harry may have been in trouble, but seeing him return to the ground and continue to compete was a relief, particularly after the Giants had lost Taranto earlier.

Bobby Hill is starting to look dangerous. His speed over the first ten metres is like lightning.

Finally, the development of Jacob Hopper is a pleasure to watch. Seen as a midfield bull, which he can play easily, he has added more to his arsenal this season, and his sidestep, and willingness to hold onto the footy is something that is coming along nicely as he gets more confident. When Taranto went down, Hopper took the reins and brought a few of the young blokes along with him.

Hopper is 22, but he plays like a veteran. With him and Adam Kennedy both stepping up today, the orange army was in good hands.

Great win by the Giants – yes, just a practice match, but the Swans will be wanting to address their inability to score in a hurry.