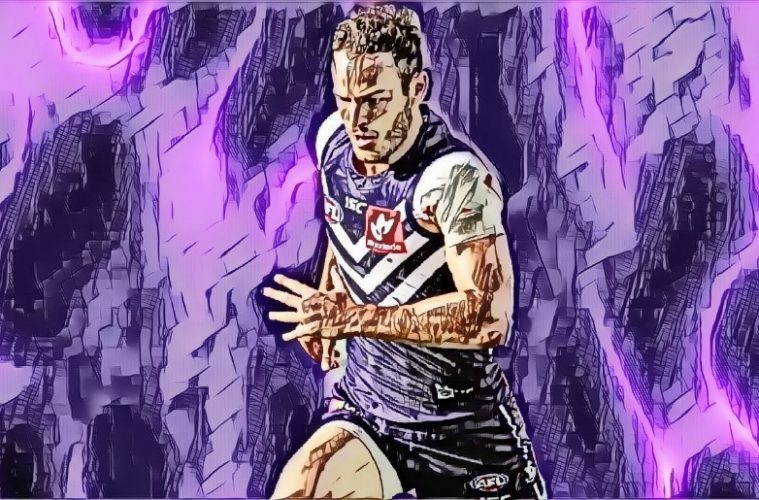 The Blues headed west to take on the Dockers, and what looked to be a good tussle between teams looking to find their style of footy in 2020 soon degenerated into a turnover-laden mess as both teams combined to produce the least-impressive outing of the pre-season to date in terms of disposal quality.

The defenders had an absolute field day as the mids continually hacked the ball inside 50 if they even got there, with many forward thrusts ending before the ball even got to attacking 50.

In a nutshell, it was a terrible game of footy, but within that terrible game there were some highlights, and some positive take aways.

Let’s concentrate on them before I gauge my eyes out.

Clunk, clunk, clunk… that was the story of Rory Lobb’s night. He dropped back a kick behind the play and all damn game, the stupid Carlton mids bombed the ball to him.

Lobb ate up their errant kicks with regularity. Playing more in the ruck after the departure of Sean Darcy, Lobb had a picnic out there, dropping into the hole time and time again before switching forward to make the Blues pay on the other end.

Carlton had no answer for Lobb, who probably just played his best game as a Docker in a damn practice match!

Lobb finished with 23 touches, 13 marks and a huge five contested grabs as he dominated the skies.

Now here’s something you don’t see every day; a smallish forward with a bit of mongrel in him. Do you think he was inspired by playing on the ground that houses the Hayden Ballantyne wing?

Gave Kade Simpson a nice little rough up as the 300-gamer took a nice mark, and then sucked Sam Docherty in to the point the kick was reversed. He made space all day, ran hard, presented like Joe Ganino at the Blue Oyster Bar, and laid six tackles to go along with a game-high four goals.

Sure, he burned Sam Sturt to claim one of the goals, but that was a mistake, right?

Schultz is a fiery character. I liked the edge he brought to this team tonight, and on the back of that performance, he should get a look in early in the season.

So, both teams had some new blood. How did they fare?

BLAKE ACRES – Had a heap of the ball but seemed to distrust his own skills at points, opting for the cheap kick instead of doing what Freo need him to do and take some risks. Even late in the game, his indecision was frustrating. That said, 31 touches and six clearances  on debut – you’d  take that.

JAMES AISH – Excellent game, and looked comfortable right from the start. His 24 touches and six tackles aided a Fremantle defence that welcomed his composure. Not sure he could have played a better one for his new team. Oh, except for the bit where he allowed Sam Walsh free passage through the middle and stepped out of his way because he didn’t want to touch his head. Nice work AFL… looks great when players avoid contact.

JACK MARTIN – Started well, played 45% of the game and made a couple of halfway decent efforts. Blues fans, keep an eye on him – not sure he works anywhere near hard enough. Extremely talented but will be interesting to see if he can develop the work rate to match the talent.

JACK NEWNES – Avergae. Yep, avergae… I’m misspelling it on purpose because I don’t think he was “average”, I think he was something a little different… which is less than average. It’s avergae.

If you missed the game and look at Doc’s stats, you’d probably smile. Not that his stats are outstanding or anything, but he got a bit of it and didn’t get hurt.

That’s the win, right there.

I spoke to a couple of Carlton supporters about their expectations of Docherty this season, and I reckon after watching him in this game, they’d be a little disappointed. Doc padded his stats with 6-7 touches in the last quarter, but his kicking was way off for the whole contest and you could tell he has a little bit to go yet in order to get back to his best.

Two knee recos take a toll. He would have had that little voice in his head this evening, telling him to be careful, warning him when he changed direction. It takes a while for that voice to fade into obscurity.

Docherty made no huge impression on this game other than getting through it unscathed, and for me, that’s enough. No disappointment at all.

A GAMESTYLE THAT WALLPAPERS OVER CRACKS

I’m gonna hand it to Justin Longmuir already – he knows what he wants the Dockers to do, and it was only when they went away from their style in the third quarter that Carlton started to look a little dangerous.

The 20-25 metre short-passing game cut the Blues to ribbons in the first half as every Freo player on the park lowered their eyes and looked for the short option to ease the pressure. It didn’t matter whether it was an established player or a no-name; if you were willing to work hard to get into the space just ahead of the kicker, they would honour your efforts.

The wheels fell off in the third quarter as fatigue set in and the Dockers resorted to kicking and hoping, which simply, never works at this level. The intercept defenders are too good, and they eat that shit up!

If the Dockers can manage to moderate how often they use that style and pick and choose points in the game when they unleash it, I can see them controlling the tempo of plenty of games this season. Whether they win them or not… that’s another question entirely.

So, who were the main offenders in the errant kicking department?

Jack Silvagni. He may as well have just kicked it to the opposition on purpose – it may have landed with a teammate by accident.

Matthew Kennedy – The more I watch him, the less I believe in him.

David Cunningham – Either has terrible vision, or terrible skills. Or both.

Cam Polson – Have never seen him play a good game, but then again I don’t watch every Carlton game… I’m not a masochist.

And for the Dockers… Blake Acres got plenty of it, but man he doesn’t look confident yet. Maybe it will come, and if he is collecting 30 touches a game, hitting the target with more than 48% of them probably becomes vital.

I thought Weitering and Jones started to work well together  in the second half, particularly when Matt Taberner was off the ground and they were able to concentrate their efforts on one or two tall forwards.

Speaking of Taberner, how good could he be if he didn’t have the devil on his shoulder pulling all his kicks left? If he added a pair of kicking boots to those hands… wow.

Question without an answer. You can answer it if you like  – do Carlton have too many “pressure” players who simply cannot kick the footy to save their lives?

The move of Brennan Cox to defence is an interesting one, but I didn’t see the mooted Cam McCarthy to the wing move in this game… unless he jogged up there and back to the forward half a couple of times.

Interesting to see both Brayshaw and Cerra into the middle. They’ll both benefit from having Fyfe and Mundy back out there for protection.

Griffin Logue looking very fit and may be a very valuable piece to the Freo defensive puzzle this season.

Haven’t really seen someone live inside their own head on the footy field as Brandon Matera. He started last season with a pre-season outing like this as well. I wouldn’t be too worried about his form. At least he didn’t get reported… that we know of.

Mitch Crowden only played 32% of the game, but I thought he was one of the few to maintain his composure and hit targets when every other bloke out there was spraying it all over the placed like me at a urinal when I’m the only one there.

Nice cameo from Bailey Banfield to slot in, snag two goals and put the game beyond reach. At that period of the game, the Blues were still in touch. Not for long after Banfield stepped up and slammed the gate on them.

So that’s it. Not the most impressive win by the Dockers, but their style, if they can switch it on and off, could see them trouble some teams. For the Blues… if you were banking on this season being very different, this game would have been sobering to say the least.

Oh, one last thing – Kade Simpson attempting to get someone to push him, then dropping at the knees to get high contact was piss weak. I hate seeing that sort of crap.