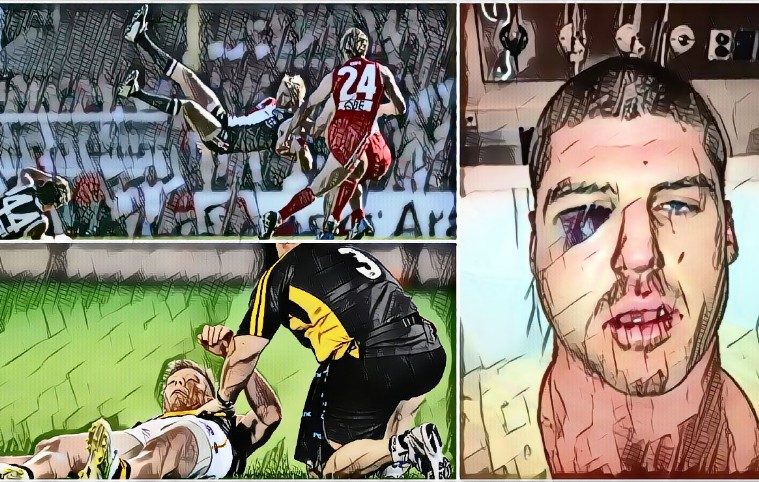 If you listen closely enough, you’ll hear the drums beating.

Concussion, and the lingering effects of head knocks are once again front page news as the results of tests on the brain of Polly Farmer after his death at 84 years of age, indicate that he suffered from Chronic Traumatic Encephalopathy (CTE).

Farmer played in the VFL, and WAFL between 1952 and 1971, and is largely credited for revolutionising the sport in terms of the use of handball as a weapon. His passing in 2019 generated an enormous amount of sympathy and grief from the football community as one of the greatest indigenous players, and greatest overall players of all time.

In the wake of the test results, we are already hearing cries for the banning of the bump in our sport yet again, as though the rules around the application of the bump haven’t been altered at all in the years since farmer ran around the grounds, plying his trade.

Let’s get this straight – comparing what was happening on a footy field in 1960 to 2020 is like comparing fashion. Yes, pants were worn then as well, but look nothing like what we’re getting around in now. Yes, people also wore shirts, blouses or jackets, but they are removed from the current fashion.

Whilst Aussie Rules is still the game, the style that is played now is far removed from that which was played 60 years prior. And compared to then, the bump is already dead.

But the drums continue to beat.

It was the 1990s that saw the bump come under target. Really, it was the AFL that made the leap from state league to national competition, and with it started to tighten up on head high contact. Players started being rubbed out for high bumps that ten years earlier would have been judged as part of the game. First it was leaving your feet to bump that was outlawed, then the head became the focus.

We then moved to an eras of lawyers as administrators, and phrases such as “the head is sacrosanct” became part of the football fan’s vernacular as a result. That morphed into the modern incarnation of “duty of care” which is applied to assess a player’s actions on the field in the current climate.

But the reaction to the news of Farmer’s results starts me wondering just how far down this path we are willing to travel before our sport stops resembling the game we grew up playing?

We remember with great fondness the courage of both Jonathon Brown and Nick Riewoldt in running with the flight of the ball and launching, recklessly and with so little self-care as to be incredibly dangerous, to take spectacularly courageous marks.

How could we forget those moments?

But at the crux of it, they were two situations that could have resulted in horrific injuries to either of those men, or other players in the contests. There was very little “duty of care” shown to themselves, or others in both circumstances. The potential for serious head injury in both cases was significant.

So, if we’re serious about preventing head injuries and the ensuing furore over the state of players’ brains years from now, what do we do about it?

Do we also ban running with the flight of the footy into marking contests? That action, and an errant Jeremy Cameron forearm cost Harris Andrews multiple weeks on the sidelines in 2018 with bleeding on the brain, and also saw Jonathon Brown with numerous facial injuries in 2011 after he tried to repeat the effort that won him mark of the year in 2002.

So, banning running with the flight sound a bit far-fetched?

Hmmm, how about if you jumped in a time machine and travelled back in time 20 years. Your job is to explain to a group of AFL players, or AFL supporters that players would be getting suspended for tackling too hard within 15 years. What was holding the ball then would be automatically a free kick for a “dangerous tackle” overnight. What sort of response do you think you’d get from them? Do you think they’d think it was a bit far-fetched?

The sport has all but killed the bump, and it has watered down tackling to the point where some of the “dangerous tackles” being penalised are a bit of a joke. The player bounces up, takes their kick and play resumes. Umpires are forced to guess on the spot and players are now punished for tackling well… the football world has gone mad. Those players 20 years ago, would have laughed at you.

But wait, I have more. “Studs up” was brought into the game last season, as a result of Toby Greene studs-upping the shit out of anyone he could in 2018, but will we stop there?

I’m putting this out there – we are one significant injury away from the AFL considering banning the use of knees in marking contests.

So did free kicks for tackling well not all that long ago.

Think about it – players running at velocity, crashing into packs with their knees… ask Sam Newman or Tom Lonergan how it feels to have your kidneys rendered useless by an errant knee. Imagine one of those knees hit someone in the temple? It might be lights out – permanently.

Whilst I do not discount the impact of CTE on the lives of those suffering from it, has the game moved to a place now where enough measures have been taken to prevent the likelihood of these injuries? Or will the AFL and it’s governing body push further to eliminate the gladiatorial style of game, with pressure and contact coming from 360 degrees in an effort to make something safer?

Will headgear become mandatory? Will further restrictions on what players are and aren’t allowed to do change the game to a point where we are watching a slightly more physical game of basketball?

Picture a game where Nick Riewoldt pulls out of the marking contest in Sydney because he isn’t permitted to run with the flight.

Picture a game where Alex Jesaulenko takes a screamer and the commentator screams “Jesaulenko, you beaut… oh, he’s infringed with the knees to the back of Jenkins’ head.”

Picture a game where, in the dying moments, a player takes on a tackler, is dragged to the ground and a free kick is paid in front of goals for a tackle being too aggressive.

There will come a time where the first two may become a reality. The third one is already here.

My question to you – is that a game you want to watch? Because I’m not really sure, myself.