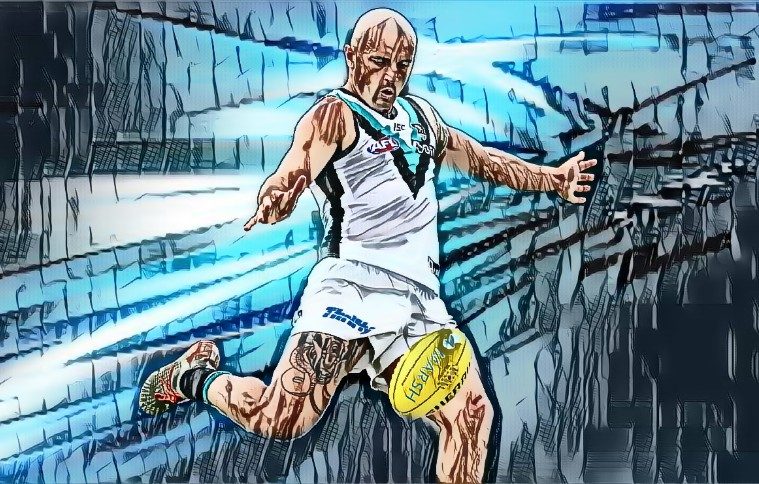 What do we take away from the Port Adelaide Power’s 21-point win over the Brisbane Lions?

Well, we must remember, it’s the pre-season, as supporters of Hawthorn, North Melbourne, Adelaide and Geelong have all pointed out in over the last few days as their teams have fallen over at the first hurdle of 2020.

Look, a game is a game, and whether it is the pre-season, or Round One, there is plenty to take away. Some players are in better nick, others are playing in a new role, and it is our first chance to see some players in new colours.

Yes, it is the pre-season.

Yes, it is unimportant in the grand scheme of things, but for Port, who are looking to bounce back, and Brisbane, who are looking at not becoming the next fall from grace, sometimes it is little things, in meaningless games that start to mean something.

Here are some of the takeaways I saw from their game at Moreton Bay.

If we’re looking solely at the stats for this game, then you give the points to Dixon. His pressure with the ball on the deck was excellent all afternoon, and really set the tone for the Power.

One of the commentators mentioned that if the big bloke cares enough to chase hard, tackle and disrupt, the little guys have no excuse. He was right. Dixon led from the front and ended the game with 4.3 that could have easily been 6.1.

But in saying that, Harris Andrews dominated the air. He had a massive 17 spoils in this game – most of them on Dixon, who managed only three grabs for the game. If we are talking strictly about their one-on-one contests, Andrews was every bit the match for Dixon, but it was Dixon’s determination to influence the contest at ground level that gave him the edge.

In truth, I loved the way Andrews went about it against Big Charlie, but rather than hang his head when beaten in the air, Dixon’s aggressive second and third efforts were too much for the Brisbane Lions to contain.

As the commentators spoke about Powell-Pepper’s best position, seeming to settle on that of an impact forward, the bald bull moved into the middle and proved them drastically wrong.

If you’re looking for reasons that Port were able to kick away with a five goal to two third term, look no further than the efforts of SPP.

He won the hard ball, and his willingness to run to make consecutive contests gave the Power plenty of “oomph” at the coal face.

He did have the occasional scrubber kick, but for the most part, Powell-Pepper’s hardness and improved work ethic paid big dividends for Port.

LACHIE NEALE BALL ON A STRING

First hit out of the season… the lazy 47 touches.

Personally, I didn’t see the need for Neale to be out there in the last quarter, but there he was, adding to his already-impressive totals. He had 27 contested touches, snagged a late goal and time and time again seemed to find space where none seemed to be available.

When you contrast what Neale does, and what a player like Matt Crouch does at Adelaide, the difference is marked. Neale goes backwards and sideways where necessary, but it is not his preferred modus operandi. When the option presents, Neale gets the ball and goes – he darts forward when he sees a hole in the defence and despite what idiots may say about him, he hurts teams in a big way.

If this hit out is a sign of things to come, there is no way Neale allows the Lions to slide in 2020.

How hard is it to say sorry?

Late in the first quarter, Zorko tailed Kane Farrell to the boundary and shoved him over the line, completely cleaning up a Brisbane Lions trainer who was attending to one of his teammates. Farrell absolutely cannoned into her in the kind of hit most players would find hard to shake off. Did Zorko approach her to see if she was okay?

I’m all for physical pressure, and had he pushed him into the fence I’d be less concerned, but he shoved Farrell right into a young lady doing her job… one that was a part the club he captains! He should have at least made the effort to see she was okay, lest he come across as a bit of an asshole.

We only saw a mini bow and arrow, but the nature of Xavier Duursma’s game probably deserved a bigger one. He had 21 touches at 86% efficiency as he strolled around the wing and half forward, looking like a million bucks.

We heard the phrase “second year blues” bandied about a little by those on commentary, but none of Duursma, Connor Rozee or Zak Butters showed any sign of it.

Will they be the draft trio people talk about in five or six years as being pivotal to Port becoming a true Power again? The signs are excellent so far.

GRANT BIRCHALL IS NOT LUKE HODGE

With the retirement of Hodge, is half back now an issue for the Lions?

Whilst Daniel Rich remains a weapon, and Alex Witherden appears more than capable of slotting into a more substantial rebound 50 role, the Lions trialled both Callum Ah Chee and Grant Birchall in defence in this game, to mixed results.

If they get 15 games from Birchall, I reckon it’s a win, but he has either lost a little confidence in his ability to hit that 45-diagonal kick, or he has been instructed to be a little safer in terms of his disposals.

In terms of Ah Chee, I’m not sure the Lions have upgraded anything with him on the park. I’d be looking at him as injury insurance, but reckon he’ll play plenty of games in the NEAFL this season.

BRAD EBERT WILL BE VERY VALUABLE

They missed this bloke last season – he can mark, makes good decisions, has great skills, and is old enough and ugly enough (especially in that helmet) to know that his role in this team as a medium forward is pretty bloody important if he embraces it fully.

And that seems to be what he’s doing.

Ebert’s numbers were modest – ten touches and a goal, but his presence up forward provides Port with a strong body capable of repeat efforts to lock the ball in.

If he can play 18+ games for the year, the Power are immeasurably better.

Did you see what I saw here?

While Todd Marshall was unimpressive again (six touches with only three effective), Mitch Georgiades presented very well and looked to be a much more natural fit playing alongside Charlie Dixon.

The number 18 pick looked great attacking the footy, and Todd Marshall should be starting to feel a little nervous as to his standing at the club. After a tragic run that saw Marshall lose his parents and work his way back to the team, more is expected of him in 2020, but in his first hit out of 2020, he looked passive and his attack on the ball paled in comparison to that of his young teammate.

The pressure is now well and truly on Marshall to perform, and if it was only a little bit of pressure before this game, it has started to mount a little since.

TOM CLUREY IS A GUN

When Dylan Grimes put the clamps on Charlie Cameron in consecutive games late in 2019, people rightfully praised the Richmond defender.

And the guy who held him goalless in this game deserves some praise as well. Though the Port defence switches often, Tom Clurey took the bulk of the responsibility for keeping Cameron quiet, and that’s exactly what he did.

Cameron had just two score involvements for the game as the big forwards emerged as the main targets, and he struggled to get into the game at ground level with Clurey trailing him.

The Jonas/Clurey combination is vital to the Power’s 2020 aspirations, and with Dougal Howard now wearing St Kilda colours, how they hold that back six together is more important than ever.

Cam Ellis-Yolmen’s debut was unspectacular for the Lions. He will take a few games to work into their system but I expect him to be a very valuable addition to them this season.

Really good battle between Stef Martin and Peter Ladhams in the ruck. I’d give the points to Martin, and I am looking forward to seeing what Ladhams and Scott Lycett can produce together this season. I really hope it’s not a baby.

Dan McStay continues to nominate himself for the most underwhelming key forward in the league award.

And how good was Hugh McCluggage early in the game? When you look at his stats and see 21 touches and three goals, you could be forgiven for thinking he was dominant – he wasn’t. He went missing for around two quarters of this game.

Another unobtrusive, classy outing for Darcy Byrne-Jones in this one. I’d love to see a permanent switch to the wing for him at some stage – I reckon he’d tear it up.

And once again, something I got sick of writing about last season… Travis Boak was bloody excellent in the middle for Port.

Finally, Steven Motlop had a belter of a second half, and I am really hoping he didn’t waste one of his three good games for the season on a pre-season outing. If he can get that sort of form happening consistently, we could see Port exceed the expectations of many.

But it is a brave coach that puts his faith in consistency from Motlop. Well, are you feeling lucky, Ken?