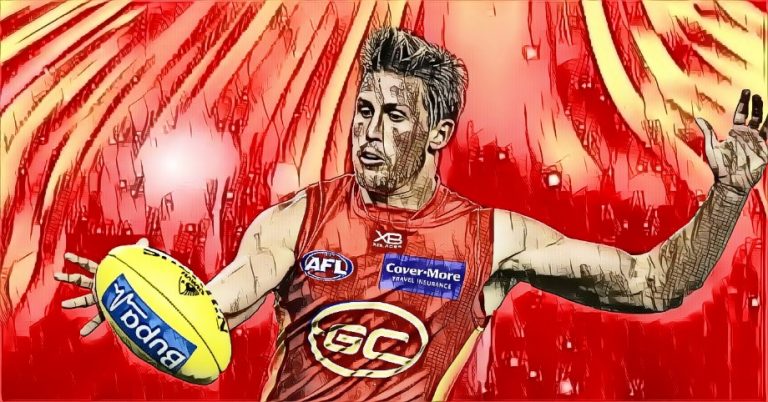 If you were wondering whether the Gold Coast Suns were ready to get out on the park and put 2019 behind them, they answered in emphatic fashion, with a belting win over the Cats.

Yes, yes, yes… I’ve read the comments from previous Marsh Series games we’ve covered – it’s only the pre-season. I get it, but this is where seasons start, and this is where the work ethic, the structures and the belief comes from.

And if the way they played was any indication, this Gold Coast Suns team is headed in the right direction.

Here’s a few things that stood out.

A FAIR BIT OF MONGREL

You know I like this sort of stuff. I like a team or even just a couple of players on a team that’ll take it up to the opposition, have a crack and wear it if it comes back at them, and in the form of Darcy MacPherson and Touk Miller, the Suns have exactly that.

The Suns youngsters are finding their feet, and finding their roles, and as they do, players like MacPherson and Miller will have to evolve and change their contributions to this team. Right now, they are the dogged, persistent, hard ball getters who will simply not back down.

I had my eye on MacPherson last season when he was one of the few who didn’t seem to drop his head as the Suns fell away in the second half of the year. He still had fight in him! And Touk Miller always has fight in him.

They combined for 15 tackles between them as their hard work and never-say-die attitude seemed to buoy those around them.

Both these guys are not yet 25, and will grow and develop with the young stars at Gold Coast. Tonight they shined just as bright as anyone.

What an astute pick up this was by the Suns. It’s funny; on our facebook page a month or two ago, I was doing a bit of “this or that” kind of polls and one of the questions was around who would have a better season – Greenwood or Cam Ellis-Yolmen. Some of the responses implied that they were both battlers.

They were short-sighted responses. They failed to see the big picture. Someone who battles, wins the hard ball, sticks tackles and basically won’t be shoved out of the way was EXACTLY what both the Suns and Lions needed in the midfield, and they bloody well got it.

Greenwood was excellent in this one, winning six clearances and laying an equal game-high nine tackles. He had 14 contested touches, and took it up to Dangerfield at points. His drag down tackle on Narkle was wonderful.

He was stuck in the midfield glut at Adelaide but we will be seeing plenty of Greenwood this season, and many will have their eyes opened as to how good a deal the Suns got in signing him.

He is so underrated, and he was at it again in this game, with clean hands, an in-and-under game that is not often commented on by “experts” and the ability to stand up for his team in the clinches. I just finished wrapping up Greenwood for what he brings, but his presence, and that of Brandon Ellis now allow Swallow some breathing space in the middle. No longer the sole man amongst boys, we could start seeing some special games from him this season.

And yes, I know he had three games with 10+ clearances, and two games with 20+ contested possessions last year – I think he is capable of doing better this season.

I loved seeing him get reward after the Sexton contest in the goal square and finishing with a goal to his name, and I loved that it was him firing the pass to get Sam day on the board as well.

David Swallow might be one of the most underrated captains in the game, but at 26, and with injuries hopefully behind him, he is the exact person to lead this team as they start their climb up the ladder.

Has he ever seen a shot at goal he doesn’t like?

And why wouldn’t he take it, given he can produce a six goal outing like we just witnessed?

Some players have the knack of being in the right place at the right time and Alex Sexton is one of those players. He has exceptional hands, rarely fumbling the footy, and knows when to leap for the ball and when to stay down.

With 39 goals last year, and more support around him in 2020, the best is yet to come from him.

I think there might be times in the coming season when a teammate is in better position and he fires at goal anyway, but you take that with Sexton – the fact is he is probably just as likely to kick the goal as his teammate, anyway.

I’ve had a couple of GCS fans mention that they think Ainsworth will be the Suns’ breakout player if he can stay healthy.

I have to agree.

His forward pressure was exceptional in this one, and it was his desperation to make the contest at half forward against Mark Blicavs in the third quarter.

Ainsworth is just 22, and as a former number four pick in the draft, obviously has the talent to make a huge impact in 2020. I’m backing him.

Something is happening at Gold Coast. You can see it in the kids, and none more so than Sean Lemmens.

There was a confidence about him in this game – sidestepping, taking the game on, that I hadn’t seen from him before. He bought himself time and space, and looked dangerous on multiple occasions.

It was fitting that it was his change of direction, sell of the candy and toe poke to Alex Sexton that gifted him his sixth goal. He’d been doing wonderful things all game and to see him get a direct goal assist late in the game was gratifying.

There was a point in this game where I thought he may be one of those players who tries to do too much, but I was quickly proven wrong.

Budarick tries to do exactly what he is capable of, which seems to be anything, given what we saw in this game. At 18, he took on some of the best players in the game en route to 14 touches and a goal. If we were giving out votes, he probably wouldn’t have featured, but his work stood out to the point where I was thinking “Who is this kid?”

I now know who this kid is.

Alongside Ben Ainsworth, this was the name that was thrown at me most when I did my Gold Coast season preview. Watching Will Brodie, they told me. He’s going to have a breakout season.

After tonight, I don’t doubt them.

He looked to be having fun out there in the second half, occupying a midfield spot and collecting 29 touches along the way. He has that loping, balanced running style than enables him to keep allow centre of gravity and is therefore tough to knock over.

I’ll be keeping an eye out for him this season.

One shining light for the Cats was the move of Quinton Narkle into the middle. He led the game in clearances – the only player who managed to reach double figures, and though he was caught holding the ball a couple of times, his ability to get where the ball was going is something other players just cannot do.

Whether Narkle stays in the middle or pinch hits up forward, this could be the year he steps it up for the Cats.

James Parsons looked good when the Cats were up and running, didn’t he? And then when they weren’t going so well, what happened? Correlation or causation?

I think Parsons like skiing. Maybe of the downhill variety.

Hawkins look monstrous early on, and I wondered what Stuart Dew was thinking having Jack Lukosius on him?

Speaking of Luko, he had a couple of moments early where he looked a little tentative. Made up for them in the third quarter, with some great attacks on the ground balls.

The Suns kids – Rowell was good, Anderson looked dangerous… lose the moustache, though, and Jeremy Sharp looked… not blunt.

Okay, that was poor. I apologise.

I love Ben King’s attack on the footy. Amongst young tall forwards, it might be a race between the King Brothers and Aaron Naughton to see who can establish themselves as number one over the next few seasons.

I know it was pointed out on commentary, but quite a few half-arsed efforts from the cats from mid-way through the third. And then there was talk of “flipping the switch”.

That kind of talk is dangerous.

Imagine if Lachie Weller had his kicking boots on in the second quarter? It would have been over after six minutes.

All the talk of reducing Gary Ablett’s fatigue levels this season, and there he is jetting off to Gold Coast to play a pre-season game. have the lessons of 2019 been learnt?

The Josh Jenkins acquisition? Wasn’t a lot on offer in this one. 11 touches and four marks isn’t a pass mark for him, but he may take a few games to find his feet in Sleepy Hollow. He had plenty of mates.