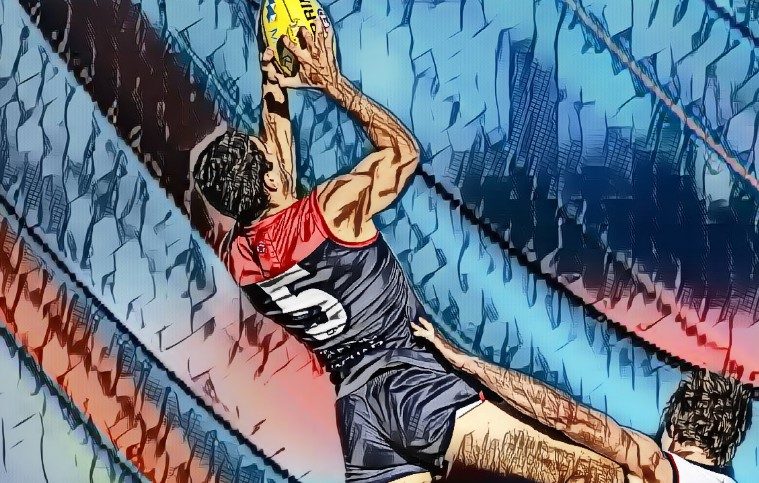 We were treated to a blinder from Marcus Bontempelli last night as the Dogs upended the Roos, and we got another one this afternoon, as the often maligned Christian Petracca put on an absolute clinic for the Demons as they despatched the Adelaide Crows.

Melbourne welcomed back a couple of faces that were missing from their regular 2019 line up, and also trialled some players in new positions as they pulled away from the Crows in the last quarter to register a 33-point win.

Here are some of the highlights.

Is this the season that Christian Petracca finally delivers?

I remember watching him in last season’s JLT series and he had moments where he looked great, only to slip back into old habits at times during the season.

Well, he wasn’t just great in patches in this game – he was far and away the best player on the ground. 27 of his 38 touches were contested, he had three goals12 score involvements, drove the Dees inside 50 nine times and laid seven tackles. It was a complete performance from a 24 year old that should be entering his prime.

And if his prime looks anything like the form he showed tonight, Demon fans should perhaps hang on a minute and not book any holidays for September. He was a monster.

Bont last night, or Petracca today? Which one would you prefer?

Melbourne built their 2018 success on pressure and a relentless attack on the ball and opposition.

It wasn’t back for four quarters in this game, but it was there in spurts. One period at the start of the third quarter saw Jack Viney, Christian Petracca, Aaron vandenBerg  and Ed Langdon all lay crunching tackles within a few seconds of each other. These were not the “stand and hold” under 10 tackles- these ones were meant to have another effect.

They were meant to hurt.

This is the edge the Demons need in 2020. No more breaking away from the centre because the defensive pressure is no good – this Demon team needs to tie people up and drive them into the deck. They need to play the unsociable brand that dragged them to a Prelim in 2019. They need to get nasty.

Aaron vandenBerg looked like he was having fun out there today, crashing in to register eight tackles as he used his body as a battering ram to clear the path for teammates. Whilst less impactful, Alex Neal-Bullen started to find the footy as well. These two were sorely missed in 2019, and the Dees look a lot better with them in the team.

The same can be said for Neville Jetta, who sent a scare through the Demon camp when he clutched at an ankle in the third quarter. In typical Jetta fashion, he refused to even sit on the bench, and was soon back out there, spoiling and making life difficult for Adelaide forwards.

Ed Langdon showed enough to indicate that he will be a weapon running down one wing, and whilst I am not sold at all on the value of Tomlinson’s disposal, he is a contest maker than can provide a marking option on the wing.

Mitch Brown should have had three goals in the first quarter, then seemed to go missing for large sections of the second and third before bobbing up to finally snag his third late in the fourth. Brown is the sort that can wreak havoc for 20 minutes and that’s all you see of him, but a return of three goals is nothing to be snorted at.

Not that he is a new face, but in a new role, Jay Lockhart was quite impressive in defence. He finished with 13 touches and six intercepts, but seemed to look very comfortable down back.

And Sam Weideman in the ruck provided a contest, but if you’re asking if he is the answer in terms of Melbourne’s relief ruck role, I reckon you’re asking the wrong question. He needs to develop into that second forward he was mooted to be last season. He got two hands to so many contests today, only to drop the mark – that’s confidence, and he will be much better for the run. In Marsh Series 2, I’d have him come out of the square.

Kysaiah Pickett flashed in and out of the game, but that’s what you’d expect at this stage of his career. He had a nice goal and looked dangerous at points, so much so that he started to garner some defensive attention at stoppages. That’s a pretty big compliment from the Crows.

Luke Jackson competed well, but is a fair way off at the moment, as is Ned McHenry for the Crows who played limited minutes and struggled to get into the contest.

Billy Frampton had some moments early, but was largely ineffective, while Jordon Butts found himself thrown to the wolves in the first quarter and got better as the quarter went on.

There would be plenty of smiles from Demon supporters as they watched Jake Lever reading the play in the first quarter.

The former Crow drifted in to take three intercept marks, and ended with a game-high nine intercepts for the contest. He started to look confident leaping at the footy, and was back to the kind of form that made him one of the most highly sought-after talents following the 2018 season.

Knee reconstructions take more than the 12 months to recover properly, and as we saw him attacking the contest today, after a full pre-season and ample time to get things right, I think Lever may well and truly be back this season.

ABILITY TO RECOVER AND RETURN THE PRESSURE

To the Crows’ credit, they endured what was a hectic start from the Dees, and were able to claw their way back into the game in the second quarter. It was gratifying to see Adelaide collectively start working harder and applying pressure of their own around stoppages, causing Melbourne to start coughing the ball up.

They couldn’t maintain it but there was a harder edge to them in the second quarter. This needs to be maintained for four quarters each and every week if Adelaide are expected to be anything other than occupying a bottom six position.

I just want to say that I am sick to death of watching Matt Crouch go backwards and sideways as his first two options. As someone who wins a heap of the footy (the lazy 27 touches today) he kjust isn’t hurting teams.

It is one thing to be a link in a chain going forwards, but too often we find Matt Crouch the link that sends the Crows backward or stalls the chain from progressing forward. In a game where taking a couple of risks should be promoted and encouraged, Crouch went back to the safe game style he played in 2019.

And how did that play out?

I feel like a bit of an ass here. More so than usual.

I’ve been pumping up the tyres of Lachie Murphy all off-season, expecting him to relish the chance to have a legitimate attacking presence in the forward 50 this season, and in his first chance to showcase his talent…

… he delivered three disposals and two tackles. Sure he had the best smother of the night but if that is what you’re hanging your hat on, you’d want to improve drastically. With Tyson Stengle looking dangerous up forward and Ben Crocker making a case for himself, Lachie Murphy has some work to do.

A horrid start to Bryce Gibbs in the backline as he hacked away at the ball in the first quarter before composing himself. Some of the decision making from him and Brad Crouch early on was absolutely disastrous and was lucky not to be further punished by Melbourne.

So Rory Atkins had 28 touches at 82% efficiency. I still think his game was poor. He looks panicked and hesitant whenever the ball lands in his hands.

Sloane was silent and went off with a hip injury after half time, Tom Lynch looked good early and drifted right out of the game in the second quarter, and Rory Laird had little impact as well while he was on the field. These three are leaders of the club, and need to make a real stand this season. Seven touches for Sloane… I know it’s only pre-season, but far out…

Tom McDonald finished with three goals and a respectable 17 touches and six tackles, but his first half looked as though he’d dragged his 2019 form into the new year. He was horrible before finally hitting his straps in the third quarter. He had 14 of his 17 touches after half time.

It looks as though Matt Crouch will get a week for a bump to the chin of Clayton Oliver late in the third. Bonehead move.

Final shout out to Daniel Talia who was under the pump holding the Adelaide defence together, but as always was incredibly solid for his team.

And that’ll do me – solid win by the Dees, with both teams having a bit of work to do as players return.