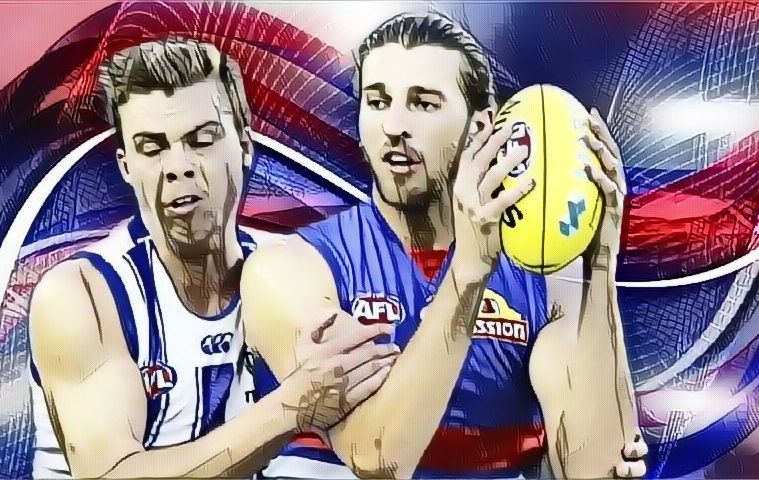 Welcome to the Marcus Bontempelli show.

If you were wondering how Bont would respond to the last game he played, where the GWS Giants got stuck into him, wonder know more – he is a man on a mission.

The Dogs got separation from the Kangaroos in the second quarter and used some precision delivery inside 50 to punish the sloppy, yet physical north Melbourne team.

Here’s some of the things that stood out.

It’s rare to watch a game and have it be so obvious that one player on the park is a level above each and every teammate and opponent.

But that’s what we had tonight.

Marcus Bontempelli rang the bell and took North Melbourne to school in this game. he had 37 touches, sizzled the ball inside 50 on 11 occasions, had 10 clearances and eight tackles.

Then he just drifts forward and kicks a couple of late goals as a big FU to those who dared mention that his goal kicking wasn’t up to scratch last season. One of those goals did eventuate from an idiotic downfield free kick thanks to Majak Daw, but nonetheless, it was Bont hitting the scoreboard.

In 2019, we saw Bont elevate his game and he was rewarded with career-high numbers across the board, as well as the AFL Coaches Association Player of the Year award. We may have been just scratching the surface.

Another year older, another year wiser, and another preseason stronger, Bont looked like a man determined to put the ghosts of late 2019 behind him. I don’t think he could have made a better start.

It would have been nice to see Aaron Naughton out there tonight, but assuming his injury isn’t too bad (fingers crossed) it was a great chance to see some other options for the Dogs.

Sam Lloyd did what Sam Lloyd does, and hit the scoreboard for three goals in his usual, unobtrusive way, but the emergence of Lewis Young – listed as a key defender – as a marking forward, was a nice surprise.

He finished with three goals, but could have really had five in the first half for the Dogs as he got separation from Majak Daw in marking contests and then repeated the dose on Josh Walker.

Yeah, it would’ve been nice to have Naughton out there, but those behind him in the pecking order did their stocks no damage at all tonight.

ANOTHER TRILOGY OF TERROR

So the real holy trinity last season was Bont, Josh Dunkley and Jack Macrae, but in this one, Bont set himself apart with a blistering individual performance.

But fear not – there was still a great trilogy out there, with Lachie Hunter stepping up his game to complete the trilogy in the absence of Bont (who got his own section above you see?)

With 85 disposals and 21 tackles between them, they played a great backup role to the dominance of Bont, and really got the Dogs moving in waves through the middle.

Macrae got his first AA blazer last year, and with Dunkley playing a whole year in the middle, he might join him and his captain. Is it too much of a stretch to throw Hunter into the mix as well on the wing?

A Bulldog mate of mine loves this bloke, and it’s not hard to see why.

He flies with the flight, keeps his feet, will lay hard tackles and take them when it’s his turn to lock the ball up – he is fearless and one of the most underrated half backs in the game.

He had an equal team-high nine intercept possessions as he patrolled half back and read the ball brilliantly, even going where angels fear to tread at some points. With 21 touches, six rebound 50s and six big spoils, Crozier was one of the Dogs’ best.

The commentary went from talking about how good Cunnington will be in the Bushfire Relief Game (it’s not State of Origin, people) to what a disaster it would be if Cunnington had injured himself.

With a bit of luck it is just a bit of soreness, but the groin/abdominal can be a tricky injury, and if Cunnington is unable to use the power he possesses through his hips, he loses one of his greatest weapons.

He was still very good in this one, but was caught holding the ball three times in this game – that is Un-Cunnington-Like, and I wonder whether that soreness was hampering his ability to push off with any sort of genuine power.

Hope he is right for Round One, and if it means he sits out next Friday, then for God’s sake, sit him out!

JED ANDERSON – A STRANGE ONE

So, what did we learn about Jed Anderson in this game?

Will punish someone if the opportunity exists? Yep.

A good kick to a teammate inside 50? Ummmm, not quite.

Anderson will never meet a contest he isn’t ready for. He will throw himself at the ball and the body of an opponent and win contested footy, but if you’re relying on him to then run forward and hit a target, you’ll be sorely disappointed.

Anderson, and his teammates, have to play to his strengths. Win the ball and dish off – that should be all that is required from him. This criticism is the same stuff that is levelled at Clayton Oliver at Melbourne, but I would take Oliver’s kicking over Anderson’s every single time.

A definite area to work on, and in a hurry. Between his field kicking and Jasper Pittard’s brain fades in defence, the Roos really shot themselves in their kicking foot.

Okay, I loved the way he attacked the contest, and he was one of the best players on the field at sticking his tackles, but that hairstyle is a shocker. One of the worst I’ve seen, not just on a footy field – in general.

I remember heading to a camping ground once when I was about 17. I reckon bailey Smith lived there. He is like that hick bloke who hangs around the caravan park, knows everyone, showers there, and people think he lives there… but he doesn’t. he just enjoys the atmosphere.

Bailey Smith is a very good player in the making – his 14 touches and ten tackles are the sort of numbers an emerging mid will be content with for now, but please… Bont, Easton or Luke Beveridge, have a word in his ear and tell him he looks like a complete dick.

No Josh Bruce in this one, but the Dogs unveiled Alex Keath, and he looked good in defence, settling in well and reading the ball well in flight. It was gratifying to see him have the confidence to zone off his opponent and impact the contest.

He had nine intercepts, matching the output of his teammate mentioned above and I reckon Luke Beveridge would be smiling and nodding when asked about how Keath fit into his system.

As good as Keath was, you can’t help but be impressed by the debut of Josh Walker for the Kangaroos. With the retirement of Scott Thompson, and questions about the capabilities of Majak Daw, the door remains open for Walker to assume the role of second key defender at Arden Street, and his performance in his first official outing would not have hindered his chances at all.

Only one of his 14 touches didn’t hit the mark, and he had six intercept possessions as well as six big spoils. Good debut.

The other player of interest was Aiden Bonar. He had 15 touches and eight tackles in a serviceable, if not standout performance for his new club. After being lost in the GWS midfield shuffle, his second lease on AFL life has started with a decent outing, but we will need to see more from him.

Well, Ed Richards’  night ended early, and it looks as though Marley Williams may spend a week on the sidelines to start the season.

It was a high bump – not too malicious, but the contract to the head was significant enough that Williams is in a bit of trouble. In general play, I missed it, but on replay it looked like a pretty nasty knock.

Marley will probably attempt to argue that he was just trying to apply pressure, and I get it, but in this day and age you have to be a little less reckless. Take the week.

AND A FEW QUICK BITS

How good was the intent and attack on the footy in this game! I guess you practice the way you play, and even though this is a practice game, you wouldn’t have known it. Big tackles and hits by Cam Zurhaar, Hayden Crozier and Jasper Pittard were all highlights of the first quarter. It was like the real thing… almost.

Some players I was a little iffy about? Jamie MacMillan and Luke McDonald in North’s defence… nice numbers, but in terms of impact – not much.

Nick Larkey is a very good second forward, but it was evident that he needs Ben Brown in there as much as Brown needs Larkey as his second forward. When the primary target, Larkey was pushed off the spot a little too easy, a little too often. He still competed hard, and was able to bring the ball to ground, but the clunking of marks wasn’t present tonight.

Majak… not sold just yet. Looked out of sorts, which is entirely understandable, but will need some improvement before a Round One berth should be considered. His downfield free kick in the last was a result of his frustration on the night.

Todd Goldstein dominated the ruck, but the Dogs were dynamite around the clearances. Jordan Sweet did a good job matching Goldy around the ground, and if you take the actual hitouts out of the equation, there wasn’t too much separating them.

Still yet to see Shaun Atley take the game on in a meaningful way. I now doubt that I ever will.

Didn’t mind what I saw from Roarke Smith in this one. Fingers crossed he gets an injury-free run for a while and can make a claim on a spot in the seniors. His ball use was good in this one

And there we go – solid win by the Dogs, with the mids firing and plenty to come back into the line-up. The Roos were missing plenty, and Ben Brown back in that team straightens them up significantly. They also had a two goal turnaround in the last 30 seconds of the first quarter which effectively set them on the path of destruction, with Larkey grassing an uncontested grab in the final seconds after a goal at the other end.

Plenty to like from both teams, but a bit of concern for North. All eyes on Cunners’ recovery this week.