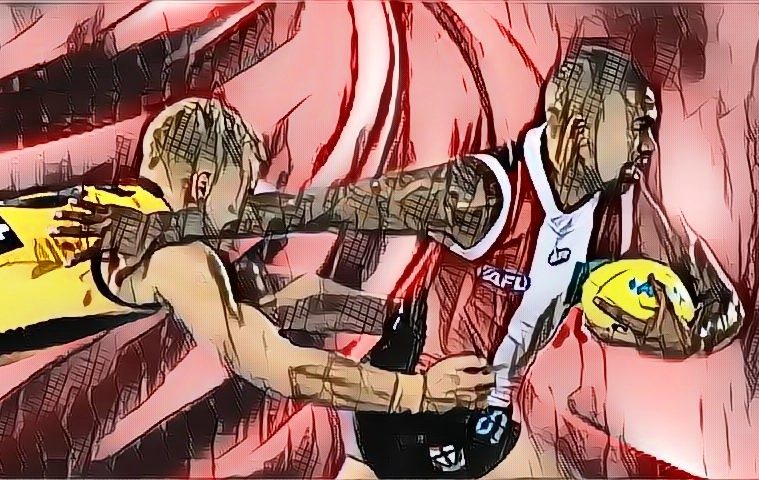 You’d be pretty pleased if you were a fan of the Saints after they polished off the Hawks by 21 points in their Marsh series opener.

And you’d also be pretty happy watching some new recruits running around and seeing how they gelled with some established teammates.

If you’re a Hawks fan, the big downside was the injury to Ben McEvoy in the first five minutes, but three quarters from Tom Mitchell and only minimal ill-effects from his year out of footy would be enough to allow you to exhale.

Here are some of the things that stood out.

He had a day out, and looks in wonderful shape. Got to the right spots, marked strongly, and even toward the end of the game, was proving he had plenty left in the tank, stretching his opponent to run to the half back flank to take marks.

In the off-season, I produced the A-Grade Ladder, and had Membrey listed as an A-Grader. It resulted in a few people alleging that I may not have known what I was talking about, but I reckon Membrey is the prototype for the modern forward – he can do a bit of everything.

And that’s what he did tonight in a best on ground effort. His 24 touches and 12 marks to go with his four goals were a match-winning effort. With Max King, Rowan Marshall and Paddy Ryder all giving him some help, Membrey may have the kind of season that makes those around him better. And maybe others will have him listed as an A-Grader by the end of 2020.

There must have been smiles aplenty as Brad Hill grabbed the ball, ran through the middle and hit the leading Membrey in stride. He repeated the dose minutes later, this time finding Dan Butler inside 50, and with his skill and class on the outside, the Saints looked dangerous when they found open space.

Hill finished with two direct goal assists as he wandered around Moorabbin for three quarters, more or less doing what he liked. Something that may have slipped under my guard for the lazy couple of years now is how much he has improved his upper body strength to go along with that amazing endurance. He managed to stand in tackles and get rid of people a couple of times this evening, and if he can do that, and maintain that elite gut running, he will make an enormous difference to the Saints.

He kicked three goals, competed in the air, and had a real presence, but there’d be plenty of Hawthorn fans content in the knowledge that the big fella got through his first hit out in brown and gold unscathed.

We heard Adem Yze outline expectations for Patton in 2020 recently, and there was no talk of goals or marks – his job was simple; bring the ball to ground and don’t get outmarked, and that’s exactly what he did in this game.

I thought he got a little gassed in the second half, and his performance fell away, but like a good racehorse first up, he’ll be better for the run.

What a welcome back for Mitchell – with one of the best stoppers in the game going to him at the centre bounce, and making his comeback after a year out of footy just that little bit harder.

Mitchell was good – 21 touches in three quarters were hardly up to his normal standard, but he moved freely and started to get his hands on the ball cleanly in the third quarter. He may have had a little rust, and admitted as much after the game, but the signs were good, and as a first step, you couldn’t really ask for more.

As for Steele, I thought he was one of the Saints’ best. His in-and-under work, particularly in the first half, and his willingness to take a hit in order to win the footy is the kind of hardness around the packs that makes things both difficult for the opposition, and easier for his teammates.

His duel with Mitchell in the first half was a joy to watch, particularly after a five or so month break from men’s footy.

Hello, what do we have here? Needs a bit of work on his disposal, but he reads the ball in the air beautifully, and attacks it with a real intent to kill the contest.

Was completed robbed of a “man in front” mark in the first quarter, and may have made a mistake or two along the journey, but overall I found him to be a very effective weapon off half back. He covers for teammates well, and can close the distance on a contest very quickly.

I think he’ll play a bit of senior footy this season, particularly if the Hawks get an injury to one of Sicily, Stratton or Hardwick at some point.

He added a real bit of mongrel to the Saints forward line. Finished with just one goal, and maybe could have had another but chose to be a little too-team oriented at one stage and opt for a short pass when a shot at goal beckoned.

That said, his kicking really let him down last season, and at points it looked a lot better in this one. For what the Saints gave up for Butler, if we’re looking at it in terms of value for money, he could end up being the recruit of the season.

His work in sending the Saints inside 50 (ten times) had him leading the game.

Howard looked a bit sore after a very hard tackle on young Hawk Damon Greaves, but his first quarter was a defensive lesson. Keep in mind that the record for spoils in a game is in the low 20s – Howard had five clean spoils in the first quarter where he absolutely killed the contest.

Teams will have to be extremely wary of his capacity to cut off long inside 50 deliveries this season, as he has added a dimension to the Saints’ defence. And when he was forced to man-up, Jake Carlisle reaped the benefits, dropping back behind the footy to play the sweeper role, notching 12 intercepts as a result.

His kicking, though… a little improvement required there.

A TOUCH OF FROST

Look, I trust Sam Frost’s delivery with the footy about as much as I trust Joe Ganino with a drink card at the over 45s night in Coffs Harbour, but in terms of closing speed… wow!

I’m guessing it might take a month or two for Frost to truly find his place in the Hawthorn defence, but from what was on show in this first hit out, we’re in for an exciting, if somewhat terrifying series of matches this season in which Frost decides whether he wants to tuck the ball under his arm and take the game on, or hand it off to someone a little more capable of making good decisions.

He was good in this one, and looks a bit like a bigger James Sicily, and is just as grumpy looking.

Loved it. Absolutely loved it. He was having a ripping game until Ben Stratton dropped a shoulder into him and slowed him down considerably.

His run and carry from half back down the wing, and his ability to find space and demonstrate clean hands enabled the Saints to really get their running game going.

Luke Breust finished with three goals and didn’t look like he got out of second gear all game. If he kicks 40 goals, the Hawks make finals.

Good start for Chad Wingard and then… limited impact after quarter time.

Not so for Jade Gresham, who added nine clearances to his 21 touches. Once again his combination with Jack Billings (27 touches and ten marks) was hard to contain, but I would love to see Gresham closer to goal more often.

Jonathon Marsh is a lot quicker than I remember from last year. Looked like bloody lightning attacking the footy in the forward 50.

Ben Long in defence poses a real threat to the position of Shane Savage in this team.

Given what we saw of Ben King in 2019, and what we saw of Max King tonight… the Saints have a winner here. Good choice to hand him number 12, pressure to perform and all.

Hoping it was just first-up jitters, but James Worpel looked rushed and completely burnt Chad Wingard who was going to run into goal if he’d handballed to him in the third quarter. I don’t like seeing it, but Wingard was entirely justified having his arms outstretched asking the question of Worpel following that.

It appears as though the McEvoy injury is more a corkie – a stroke of luck.

Nice little hit out for Jack Lonie. A four goal result is nothing to sneeze at, and his snap from the boundary in the second quarter was a pearler.

Isaac Smith kicking for goal still makes me nervous. If he could start hitting the scoreboard more meaningfully, he would be a complete player. His 2.3 and one on the full in this game could have translated into a dominant performance.

Nice outing for Hunter Clark in this one. He and Isaac Smith duelled for who was going to get the most distance covered in this game. Both had well over 600 metres gained for their teams.

Overall, nice win by the Saints – slick ball movement and set up well behind the ball. The Hawks got Tom Mitchell and Patton through, and injury to McEvoy aside, wouldn’t be too disappointed with the way things developed.