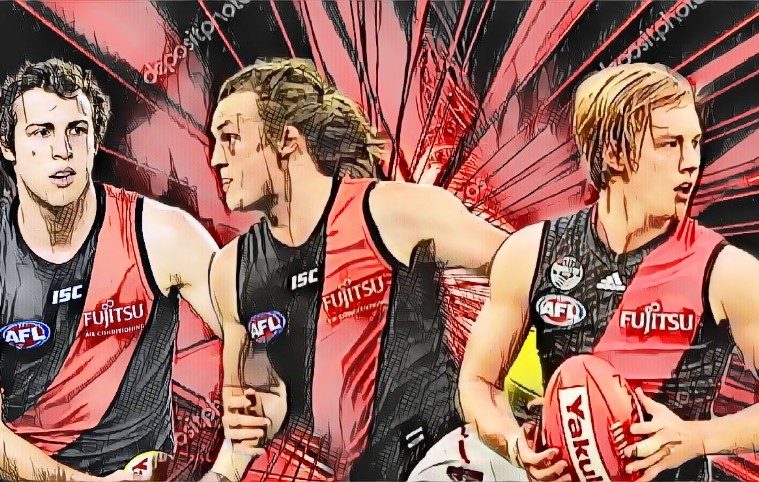 I haven’t seen a pile on the likes of this in a while. Or perhaps this is more like a pile off?

In an off-season that saw the Bombers unable, or unwilling to complete a deal to move Joe Daniher to Sydney, I get the feeling that the football world has moved past Essendon to focus on other teams as finalists in 2020.

And I also get the feeling that the Bombers would be pretty content in this situation.

So much is made of the streak without winning a final, and to be sure, it is nothing to be proud of at all, but as we head into the new season, the press around Essendon has been particularly negative. Articles on the Daniher situation, and the “will-he/won’t he” Orazio Fantasia trade to Port Adelaide were the focus during the trade period. The “injury epidemic” was the story of December, and in recent weeks the injury to Tom Bellchambers, and the flight home from Conor McKenna due to family reasons have been the main stories coming out of Tullamarine.

Add to that the speculation around the succession plan that will see Ben Rutten take the reins from John Worsfold later this year, and you have all the ingredients of a club in disarray.

Or at least, that is how it looks from the outside, or to those hoping that the club falls over.

Things on the inside can be very different. Is it as bad as the media has made out, or are the Bombers simply flying under the radar leading into the 2020 season?

In perusing the list at Essendon, yes injuries are a big concern, but there are some signs that things could be about to click into place for the Bombers. Their crop of young players on the cusp look as though they could finally be ready to take the next step. That group, all in their early 20s, could be the nucleus of a sustained run at finals. Particularly if the expected improvement actually comes to fruition in 2020.

Then there is the return of the 2018 best and fairest, and a possible return to form of a controversial small forward that may go a long way to closing the mouths of those quick to write the Bombers off. Take it from me – I am a Hawthorn supporter, and of all teams, I hate seeing the Bombers do well, but as a football lover, I know what an Essendon team that is up and about brings to the competition.

It’s sad to admit, but part of me even misses it.

As a child of the eighties, I developed a hatred for Essendon. Dermott Brereton once stated “We don’t hate them who they are; we hate them for what they stand for!”

The fact of the matter is that the Hawthorn v Essendon rivalry transcended hatred for me – it became about respect, and every game through that period added to it, win, lose or draw.

But in terms of respect from fans of other teams, I’m not sure the respect is still there. In its place seems to be something bordering ridicule. I get the feeling that Essendon needs to win respect back from these people. And it starts with the improvement of those young players.

Amid the doom and gloom spouted by others, there might just be some positivity for the Bombers to look forward to in 2020. Let’s have a look at where the improvement could come from.

The former number one pick has been more or less the same player he was when he was drafted. Skilled, and yet to truly find his true niche in the Bombers side, 2020 shapes as a pivotal year for him.

Does he move into a permanent midfield role? Does he use his speed and delivery to become a specialist half back? Or maybe a spot on the wing beckons? It would be highly beneficial to the Bombers to have a settled version of McGrath on the park. Mr Fix-It kind of players are great, and when deployed strategically, can hurt opponents in many ways, but McGrath in a regular role could move to the next level. Will it be 2020 this happens?

Mooted by many as the potential inside mid that the Bombers have needed, Parish strikes me as someone who is more a complimentary midfielder at the moment – able to come in and attend centre bounces here and there, but not a player you really need to concern yourself with in terms of containing.

As stated above, Parish is the epitome of the kind of player than is required to raise his game for the Bombers to be successful. The improvements he has shown have been marginal to this point, and when people talk about players who have had a breakout season, you’d be hard-pressed to apply this term to Parish at all.

Another of the proposed inside mid solutions over the last couple of seasons, Langford is a divisive player amongst Bomber fans. Believe it or not, I listen and read quite a bit about the Bombers, and the development, or lack thereof, from Langford is something that comes up often.

2019 saw him play his highest number of games in a season, but the consistency was not commensurate with an increase in production. Langford stagnated in 2019 (he had a fair few mates) and quite a few jumped off the bandwagon. This is year six on the Essendon list. His time may be now.

Enormous potential, and after a solid, 17-game season, he may end up being the breakout player of the Essendon 2020 year. Reads the ball beautifully, has great timing and at 192 centimetres has the size to contend with some of the big guns up forward.

He is probably best when allowed to zone off and be third man up, and in an Essendon defence, his role alongside Michael Hurley and Cale Hooker should be locked down this season.

I know the Bombers are often tempted to move Hooker forward, particularly with the absence of Joe Daniher, but the gelling of those three in defence is vital to Essendon’s success.

With ten marks in a game just once, and the last time he had 10+ intercepts back in 2018, Francis needs some consistency, and some games where he floats across and kills contests (never had 10 spoils in a game).

Francis has shown what he is capable of. Now he just needs to do it often enough to make him a reliable and potent defender.

At just 20, Dylan Clarke has the kind of mongrel in him that you can’t fabricate. The proof is in the pudding, and in his first game of 2019, he was handed one of the biggest jobs in footy – curtail the influence of Patrick Cripps.

Not only did he restrict Cripps to just 11 disposals, he picked up 23 touches of his own as the Bombers whacked the old enemy by 41 points.

Defensive-minded mids are often overlooked when discussing important team roles, but look at what Ben Jacobs, Mark Hutchings and Matt de Boer have meant to their respective teams over the last few years. Not everything is about winning the footy and being a superstar – you need blokes who will be content with playing a role while they develop, and if Clarke can follow around some of the best in the game and hinder them, whilst learning their patterns and how they go about it, the Bombers will be much better off for it.

It should be noted that Cripps was pretty flat this day – it was right before the sacking of Brendon Bolton, and some have speculated that he’d checked out at this stage. Nonetheless, a scalp like that is hard to ignore. I’m a fan.

I love this bloke’s work, and as 2019 played out, he got better and better. With the confidence to run and carry from half back, Redman started to stand out for his speed and willingness to take the game on.

That’s saying something in a team that already possesses defensive runners like Conor McKenna and Adam Saad.

Played 20 games in 2019, and some would argue that he has had his breakout season. That may be true, but I reckon he is capable of more. Can defend with the ball in the air, or on the deck, and is one of the players that could lift the Bombers to the next level.

Had a really good first year, but seemed to go a little bit backwards last season. Whether it was second-year blues, or another reason, Guelfi did not progress as expected, and it hurt the Bombers.

Every year, you expect some organic improvement from the kids, and Essendon really didn’t get it from a lot of players in that 19-23 year old bracket.

Guelfi strikes me as a potential impact player, but appeared hesitant at times in 2019 – not a great quality.

With 32 games under his belt, returns of 17-18 touches per game, and a sharp increase in his ability to hit the scoreboard, Guelfi could add another dimension to the Bombers.

Over 20 disposals per game in 2019, and one of the few to show definite improvement, McKenna and his homesickness would have to be an issue for the Bombers.

A trip home last season, a Gaelic footy game whilst in Ireland, and now another trip back home… my hope is that he can commit for an entire season and get the best out of himself. He is as exciting as it gets running off half back.

At 23, McKenna’s ability to break lines and take the game on can carry a team along with him. There are some big question marks on him at the moment, but if he returns and can maintain focus, he will be one of the most valuable assets to the Bombers this season, and beyond.

He had the year from hell last season. Pinch-gate, name-gate, trade-gate, shitty blonde hair-gate… Orazio was in the media for all the reasons you don’t want a player being mentioned. And he wasn’t mentioned for the one reason you do want him in the media – his play.

Fantasia was down across the board in 2019, and would have to be close to the most disappointing player in the league, given the talent he has to work with. A lift from him is not just required – it should be demanded.

A lift from him takes the heat off Stringer and McDonald-Tipungwuti up forward, and makes each of them more dangerous.

The inside mid position remains a bit of an issue for Essendon, but if they can find players excelling in other areas, breaking even at stoppages, and preventing other teams from getting on top could be good enough. The Bombers have a lot of improvement in them. Whilst others talk about the negative, there is a quiet confidence in some that Essendon are far from a spent force. They did not get the improvement they expected from their young players in 2019. If that improvement comes on a 12-month delay, the Bombers could once again be a finals team – they might even win one.

Dylan Shiel will be in year two at the club – I always give players a year to acclimatise, and if he can improve his kicking, even a percentage point or two, it will serve him and his team well, particularly as he runs forward. Devon Smith returns and gives the Bombers some real mongrel in the middle – it was sadly lacking in 2019. They have recruited Tom Cutler, who will provide more of an inside presence, and if they get a fit version of Jacob Townsend, he could add some real toughness to a team needing it.

With Jake Stringer in great shape, a running unit that is like a wave of red and black when it gets moving, a solid, settled defence, and a ruck division that no longer contains Zac Clarke, maybe… just maybe Essendon might surprise a few in 2020.

And if a few of those young players take the next step in 2020, maybe you’ll be one of them.