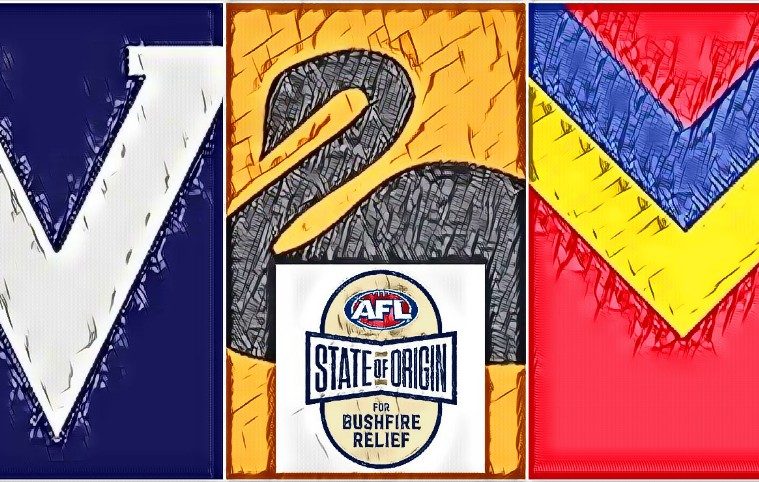 The AFL Has Outgrown State Of Origin

After bowing out at the end of the 20th century, ‘State of Origin’ will return to the AFL in two weeks’ time to raise money for the bushfire appeal, on February 28 at Docklands Stadium.

The AFL, along with its clubs and the players association also donated $2.5 million towards Australian bushfire relief in the wake of the tragic fires that have killed 34 people across the country. Plus, more than $1 million was raised in the AFL’s T20 Showdown hosted at Adelaide Oval earlier this month.

However, strictly speaking, ‘State of Origin’ is only returning in name alone for the upcoming battle between Victoria and the ‘All Stars’.

Surely, this anticipated clash more easily compares to the 2008 exhibition match between Victoria and the rest (this time badged as the ‘Dream Team’) than when the Big V defeated South Australia in 1999 in the final annual State of Origin fixture?

Back in 2008 the AFL made the strategic decision not to label the one-off contest to celebrate the 150th anniversary of Australian Football as ‘State of Origin’. Presumably, to avoid further miffing those outside of Victoria launching for their dictionaries. Can a game with only one state really be defined as ‘State of Origin’?

The league originally floated the idea of a fully-fledged State of Origin carnival but when that was abandoned, the name was too, and instead it was dubbed the ‘AFL Hall of Fame Tribute Match’

The concept was an overwhelming success with 69,000 packing the MCG to witness Victoria defeat the All Stars by 17 points in a high scoring thriller. The final scoreline read Victoria 21.11.137 to the All Stars 18.12.120.

Almost all the biggest names in the game pulled on a jumper for the historic match including Matthew Scarlett, Chris Judd, Adam Goodes, Jonathan Brown, Jimmy Bartel, Sam Mitchell and man of the match, Brendon Fevola for Victoria.

The All Stars too had their fair share of superstars such as Lance Franklin, Matthew Pavlich, Corey Enright, Andrew McLeod, Dean Cox and Matthew Richardson to name a few.

The fans who should pack out Docklands Stadium for the so-called return of ‘State of Origin’ later this month will certainly be hoping the game is more Hall of Fame Tribute Match than AFLX. And that players play like there is really something on the line.

The Victorians should feel as though there’s something hedging on the result, likely more so than the All Stars. The Big V certainly conjures up more loyalty and pride in football than… the golden A? However, are Victorians as desperate to see the Big V ‘stick it up’ the miscellaneous All Stars than a rival state?

A poll conducted on my personal Twitter page (shamelessly plug… @_TomBasso) had only 21 per cent of respondents preferring the Victoria v All Stars concept to a two-game series where the Big V played old foes South Australia and Western Australia played the Allies.

However, in the context of the bushfire appeal a blockbuster one-off game is more appropriate than a more drawn out traditional State of Origin model. In that case, Victoria is the obvious choice to be the lone state represented.

This is primarily due to Victoria boasting 53 per cent of players on AFL lists (based on 2018 figures), making Victoria v the Rest the simplest way to spilt the total playing group into two relatively even teams. No other state would be able to play an ‘All Stars’ game and be competitive.

But also, because the Big V evokes the greatest passion amongst football supporters, on both sides of the divide. If you lived outside of Victoria there was only ever one state you wanted to beat.

And if this concept is going to work, even as a one-off, the match-up itself – and who wins – needs to create some kind of genuine passion amongst football supporters.

That’s why, although South Australians and Western Australians in particular may feel partly excluded by their states not being mentioned by name, this sightly watered-down version of State of Origin football is still a better option than two generic teams.

Alternatively, the AFL could have put either South Australia or Western Australia up against Victoria. Though, this is hardly a good option as both states have be a solid claim to being a part of the game, and none really more so than the other.

Besides, excluding all players outside of two states from the game is hardly the result anyone is after. We want all the best players playing.

If it was to get a second life as a regular fixture, the football public would certainly overwhelmingly prefer it to be more states and less all-stars. No one is calling for All Star of Origin.

While, Victoria v the rest works well as a special standalone game, it would not satisfy the appetite of anyone calling for State of Origin’s permanent AFL return.

Which brings us to the problem with the AFL bringing back State of Origin now.

How would a State of Origin carnival work? What would the teams be in this concept? Would Victoria, South Australia, Western Australia and ‘the Allies’ really do the AFL code justice?

Not having New South Wales and Queensland represented completely flies in the face of more than a decade of AFL strategic planning. A lot has changed in the national growth of the game since the State of Origin of the ‘90s.

And how about Tasmania? That’s always a difficult question for the AFL in any context, it seems.

It’s starting to look a lot like Rounds 1 to 23 of the regular season.

State football originally elevated players competing in various state competitions to a national level, yet now in the age of the AFL that’s no longer special or significant. State v State action happens every single weekend.

Australian Football has outgrown being defined down state lines, it has expanded beyond these rivalries. Back in the 1990s when state footy was last part of the football calendar, a national league – with a national name – was still in its infancy.

Footy has moved on. That is State of Origin’s problem.

But the problem for the AFL would have been if it had not outgrown State of Origin.

State of Origin remains ginormous for Rugby League, surpassing anything else the code has to offer. State loyalty transcends club loyalty, the New South Wales-Queensland rivalry is far more significant than any club-based rivalry the NRL has to offer.

NRL State of Origin grabs the whole nation’s attention. It does the reverse of the AFL, and grows the game beyond New South Wales and Queensland. To the extent that it is taken on the road as recently as to Perth last year and Adelaide this June.

Everyone in the country is either in the New South Wales or Queensland camp when Origin is on. Regardless of how flimsy the connection is. Your uncle lived in Queensland when he was younger? Then you’re a Queensland tonight – Carn the Maroons!

Do you think anyone in New South Wales would really care who wins an AFL State of Origin match between Victoria and Western Australia?

The AFL’s State of Origin does not have the power of the NRL version and it never will.

The NRL has two clear superpowers unlike the AFL who would have SA and WA fighting to be the second banana to Victoria.

While the NRL does not have a strong following outside of New South Wales and Queensland, the AFL is a commanding force in four states and is working heavily on the other two.

Although, this makes State of Origin difficult, this is a point in its favour not against. It just means that on the way to bigger and better things and greater prosperity;

You might lose one or two things along the way.