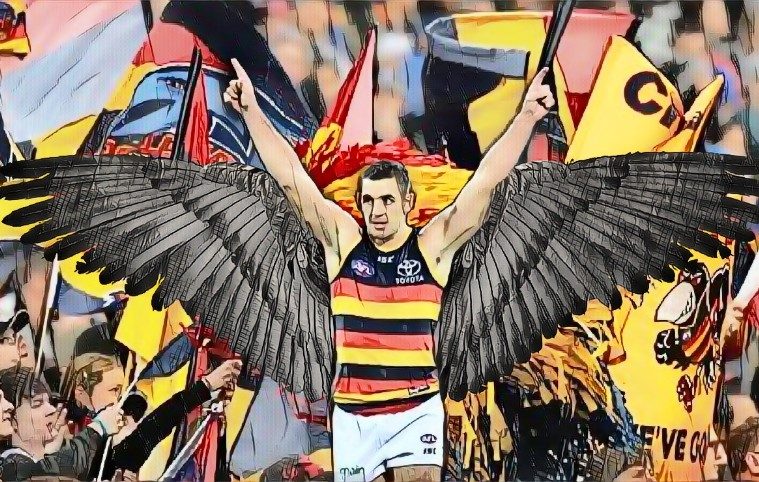 On A Wing And A Prayer

“If you don’t change anything, nothing ever changes.”

Those with an axe to grind will have some more motivation heading into 2020. Their favourite target is on the move, looking to redefine his role at the club he captained for five years.

Taylor Walker appears set to have his wish granted, and will be trialled as a wingman in the rapidly approaching AFL pre-season competition. And those people are hoping for him to fail, as always.

The knives have been out for Tex Walker for years now. He is a big personality in a two-team town, and one of the loudest as well on issues he believes are important at a footy club. One of the most recognisable faces, and pairs of ears, in football, Walker’s presence as the leader of the Crows came to an end following the 2019 season, allowing Rory Sloane the opportunity to assume the role of sole leader of the team heading into the new season.

New Adelaide coach, Matthew Nicks seems like a progressive sort of fellow. Taking the reins of a team that needs to be rebuilt, Nicks appears to be more than open to moving his chess pieces around in order to find a structure that will see the Crows hit the scoreboard more potently in 2020.

But if a more potent offence is the goal, is moving Walker further away from the goal face the right move?

Walker led the Crows in goals for the third time in 2019 with 43 goals for the season – seven years since the last time he topped the list, and despite a huge amount of criticism levelled at him for a variety of reasons, he was in the top ten in the league in goals kicked as well. Despite the Crows’ failure in 2019, Tex held up his end of the bargain.

He enters the 2020 season leaner and more mobile than any in recent history.

But can he match it on the wing with endurance beasts such as Brad Hill, Andrew Gaff and Isaac Smith? One would think that Nicks had better be ready to swing a change or two should he find Tex in a match-up like that. Walker may be fitter and leaner than he has been in many years, and may be able to run out games effectively on the wing, but those who excel in that role are relentless running machines. As fit as he may be, they will leave Walker in their dust.

Walker, who described his wishes to play on the wing as “wishful thinking” as little as a few months ago is now faced with the reality that his excellent field kicking skills will be put to the test, as will his endurance, in this new role.

Sometimes it’s wise to be careful what you wish for, but there is a best case scenario at play here as well.

Images of a late-career Matthew Richardson powering up and down the wing en route to a third-place finish in the Brownlow in 2008 must enter the minds of Crows fans when thinking about the possibilities of Walker in a new role. Richo reinvented himself that season, using his excellent tank and ability to beat any player in the league in the air to create opportunity for the Tigers. Richardson further endeared himself to a rabid Richmond fan base with one of the best seasons of his career.

Richardson averaged a career-high 18.20 touches per game in 2008, but also maintained an excellent 2.4 goals per game despite spending much more time away for the forward 50.

Could Tex do something similar? And can he continue to have an impact on proceedings late in the piece in games? Does he have the endurance? He has never averaged above 15 touches per game, and hasn’t been around the 2.4 goals per game mark since 2017.

Walker’s tank may not be at the same level of Richo circa 2008 and it is doubtful that he could cover the same amount of ground, but if he can get front position in contests between wing and half back, he provides a crucial “get out of jail” option for the defenders expected to be under the pump this season. A Tex Walker with an unimpeded run at the footy is a dangerous prospect. And a Tex Walker with time to assess and deliver the footy is just as dangerous – he has one of the best career averages in kicking efficiency, at 60.6%. there are some players who around that mark for total disposals, propped up by simply effective handballs.

With Darcy Fogarty looking as though he will be the focal point of the Adelaide forward line, and solid support most likely coming from Tom Lynch and perhaps Elliott Himmelberg in the air, the option to move Walker into a more mobile role seems right. In truth, not a lot is expected of the Crows by the wider AFL community. After an off-season that saw plenty of players seek opportunities with other teams, you could be convinced that the Crows lost a lot this off-season.

Josh Jenkins, who I actually rate really highly, is 31 years old. Eddie Betts is 33. They’d run their race with the Crows, and neither would have been around when Adelaide contended again. Hugh Greenwood and Cam Ellis-Yolmen often found themselves battling for the same position of fourth midfielder, and were continuously behind both Matt and Brad Crouch, and Rory Sloane in the midfield rotation, whilst the move of Alex Keath to the Western Bulldogs should be covered pretty handily by the return of the Crows’ resident movie buff, Tom Doedee from injury.

So, from a best-22 stand point, what did the Crows lose?

The answer is – not that much in the grand scheme of things.

But how detrimental to the scoring punch of the Crows will Walker’s absence be should he spend more time running the wings in 2020?

Eddie Betts was the second-highest goal scorer at Adelaide in 2019, with 37 goals and although plenty of those goals were junk time, or glorified junk time goals, replacing a combined 80 goals isn’t easy. If the Crows cannot kick a winning score, how long until we see Walker plonked back in the goal square?

The Crows may take some time to fully answer the question, and those left to assume responsibility for scoring have to be given time to own their roles. Fogarty showed what he was capable of late in 2019, but questions still linger about his defensive acts (he had just two tackles in his four games last year). Lachie Murphy will receive ample opportunity to make the small forward role his, and he is one I am tipping to take his game to the next level in 2020. And Elliott Himmelberg will look to replicate the season of his Giant brother, who at two years older is showing signs of not only being a mark/goal man, but also a team-first operator.

The Crows may have to endure a little bit of pain as they work out the kinks, but as Tex Walker receives on the wing, turns and hits one of Fogarty, Himmelberg or Tom Lynch with a pass inside 50 in the upcoming Marsh series, there may well be some knowing smiles from the Crows coaching box.

And some frowns from those poised to whack Walker.

“If you don’t change anything, nothing ever changes.”

The Crows, and Tex Walker will not die wondering in 2020.