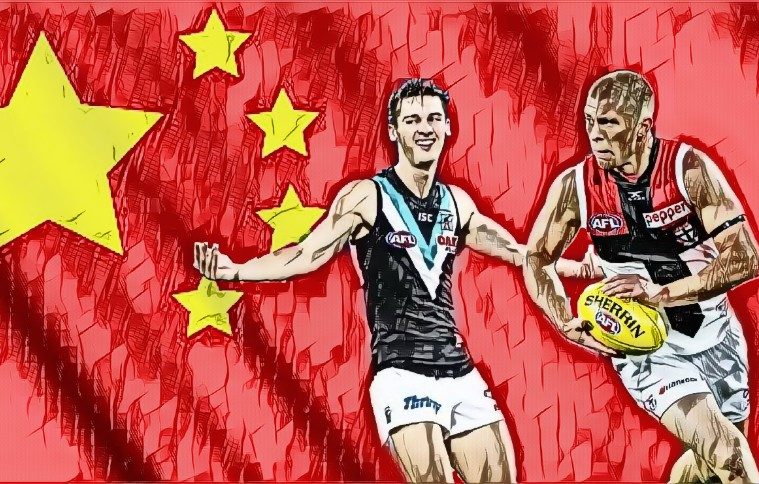 The China Syndrome – When Do The AFL Pull The Pin?

The China Game: Contingencies and Consequences

The far-reaching ramifications of the coronavirus, the pneumonia-like illness that originated in the Chinese city of Wuhan, has captured the world’s attention and has placed several Chinese cities in lockdown. The global death toll from the virus has now reached 492 but that is almost certain to rise.

And a long way down the list of concerns regarding the impacts of this deadly virus is a mid-season game of a domestic Australian football competition scheduled to be played in Shanghai in late May.

Despite all of the obvious problems and difficulties, the AFL has prematurely declared that the Round 11 clash between St Kilda and Port Adelaide will “go ahead as planned” in a statement released last week.

“The AFL will take advice from the Australian government and World Health Organisation regarding any safety precautions related to the coronavirus.

“The St Kilda vs Port Adelaide match scheduled to be played in Shanghai on May 31 will go ahead as planned.

“The situation will continue to be monitored with the relevant health and safety precautions being exercised.”

But unless the AFL has access to information no one else does, they would have no idea what the state of the coronavirus will be by the end of May. And while they did acknowledge they will continue to monitor the situation and take advice from the government and WHO, the AFL were not in the position to say the game will go ahead as planned.

But they did anyway.

Likewise, Port Adelaide, who have also maintained that the game will proceed, undeterred by the current state of affairs in China. As recently as Wednesday, club great and media commentator Kane Cornes said on SEN SA that Port Adelaide had told him the game will be going ahead in Shanghai, which is 800km east of the virus’ epicentre in Wuhan.

Although, the AFL’s conviction had softened by Wednesday with AFL CEO Gillon McLachlan conceding on SEN in Melbourne that the game is now under weekly review.

Despite the assurances from the AFL and Port, the game has to be under serious doubt.

Almost certainly the match would be have already been scrapped if it was an early season fixture.

Especially considering that Australia has now lifted its travel advice for China to “do not travel”, as announced by Prime Minister Scott Morrison on Saturday.

Port Adelaide has said it wants at least eight weeks’ notice to change its plans regarding the annual Shanghai game, which brings the timeline forward to early April for a final decision to be made. If the coronavirus is not successfully contained by that point, the AFL would have no choice but to move the game back to Australia.

Specifically, to Melbourne, as St Kilda CEO Matt Finnis has said his club would not entertain the prospect of selling their home game any where else if the China game falls through.

However, what needs to be considered is the fact that Port Adelaide has already purchased the home game off St Kilda, reportedly for $500,000. Although that deal would have been done on the proviso the game was being played in China. If that becomes a different case, presumably St Kilda would have to repay the $500,000 back to the Power.

But moving the game to Melbourne also presents its own set of issues with both the MCG and Docklands Stadium being unavailable to squeeze in another Melbourne-based game in Round 11. The contingency plan, as hinted at by Gillon McLachlan on SEN, is for the game to be moved to Round 12 where both clubs have a bye that would be moved forward to Round 11.

There is an opportunity for St Kilda and Port Adelaide to open Round 12 on a Thursday night at Docklands Stadium or be played as a Sunday twilight or even night fixture on the eve of Monday’s Queen’s Birthday ‘Big Freeze’ clash.

In the case that this scenario is acted upon, it would be most detrimental to Port Adelaide who have pioneered the annual Shanghai game since it was first played in 2017 as part of the club’s broader and profitable ‘China Strategy’.

Firstly, from an on-field perspective, Port would be far less confident taking on a new-look and beefed-up St Kilda outfit on their home deck rather than in China, where they belted the Saints by 70 points in 2019.

But primarily, if the game was cancelled it could significantly halt the momentum of the Power’s push into China. Especially considering this year’s Shanghai game is so pivotal to the timeline of appointing a new CEO to take over from Keith Thomas at the end of the year.

Outgoing CEO Keith Thomas told SEN SA in December last year that “it would be fantastic to have them (the new CEO) in place so they could see us execute China. That is going to be an important part.”

No China game would also put a serious dampener on Port Adelaide’s 150th anniversary year-long party that is shaping as a crucial year for the club both on and off the field.