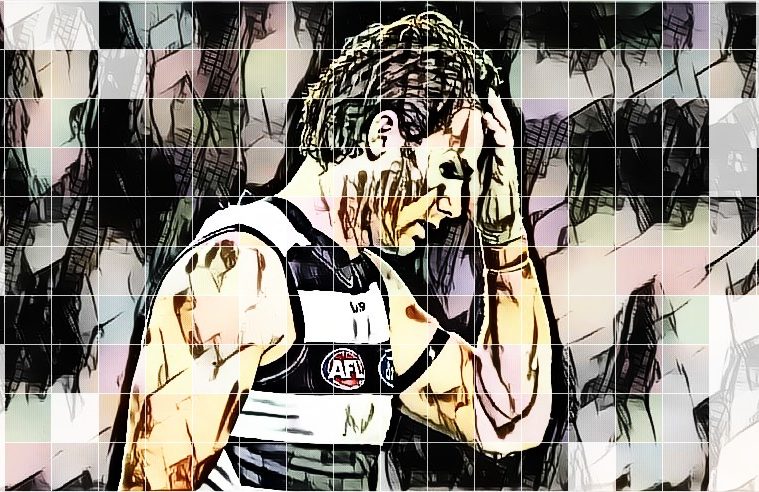 Sometimes you need to take a step back and look at the bigger picture to truly grasp a situation.

Over the past few years, I’ve been quite intrigued with the move of Lance Franklin to Sydney and just how effective it’s been. The fact he left a successful club, and then fell over against that same club as they continued their run of premiership has always made me question the move. I mean, wasn’t more flags one of the reasons Buddy joined the Swans? Unless there is a monumental turnaround in the next two years, it looks as though when he retires, he will always have a couple of flags less than his former Hawk teammates.

However, in zeroing in on Buddy, I feel my focus has been a little narrow. He is as high profile as it gets, and hs move to Sydney was huge, but there is another player who jumped clubs to a different successful team who has not even made the big dance since he arrived. Somehow, the inability of this player to enhance his legacy with a premiership has not really tarnished his reputation in the game to this point.

But will it remain that way?

Patrick Dangerfield’s 2016 was a brilliant season by any standard. A Brownlow Medal, a Leigh Matthews Trophy as the best player in the land as judged by his peers, and the AFL Coaches Association player of the year award is a rare triple in the modern game*, but Dangerfield’s individual success was not replicated by that of his new team.

Geelong fell to Sydney in the Preliminary Final in 2016. They followed that up with a Preliminary Final loss to Adelaide in 2017, then an Elimination Final loss to Melbourne in 2018, and finally, another Prelim loss to Richmond in 2019. The team has been close to a Grand Final on three occasions but has been unable to get over that final hurdle. They’ve been good, but not good enough.

As much as I have thought about Buddy’s inability to make good on winning a flag with his second team and whether or not that makes the move a failure overall, is it time we start to reflect on Dangerfield’s move from Adelaide to Geelong and start putting this under the microscope as well? The Crows made a Grand Final two years after Dangerfield’s departure. They lost arguably their best player and still managed to improve. They did not win, obviously, and have since seemed to implode, but without Dangerfield they made a step they were unable to take with him.

Irrespective of what happens next, Franklin has two flags packed away – his legacy is secure. When he retires, he will be remembered as a two-time premiership player. At the very least!

Unless Patrick Dangerfield and his team turn around their September fortunes, will they be remembered forever as the bridesmaid? And not even the matron of honour-level bridesmaid, but the third, or fourth in the line at the wedding reception that gets stuck dancing with the groom’s socially awkward cousin.

On an individual level many see Dangerfield as a great home and away performer, but one who goes missing in finals. This is a perception of Danger that is probably overblown. His finals averages closely resemble his overall career output. He is +1.17 disposals and +0.52 in contested touches in finals, whilst his clearance work takes a small dip at -0.36 and his goals per game are down -0.14 per contest. So he doesn’t necessarily fall away in finals.

But sometimes it is moments, or quarters in games that tend to define how a player is remembered.

After 19 possessions in the first half against the Tigers in the 2019 Prelim, and playing a large role in the Cats establishing a 21 point half time lead, Dangerfield shrunk when his team needed a leader. His two disposals in the third term were indicative of his team’s inability to stand up and be counted as the Tigers started to roll toward the last Saturday in September.

And they rolled over Geelong in the process.

Is it unfair to malign Dangerfield when an entire team seemed to shit the bed in the face of the yellow and black onslaught?

Geelong had the ascendancy. The game was there for the taking. Not only did they fail to capitalise on what could have been a match-winning half-time lead; they completely froze and became deer in the headlights of the oncoming Richmond machine.

They were overrun in the process. A big quarter from Danger, or even a couple of big moments may have been the statement the Cats needed. But there were no statements, and there were no moments. There was nothing.

Many like to compare Dangerfield to Dustin Martin. In terms of modern-day warriors, these two have both had glorious individual seasons – Danger in 2016, and Martin in 2017. Both have Brownlow Medals, Leigh Matthews trophies and both are considered game-breakers.

But only one of them is considered a finals specialist.

In September, the comparisons between Dangerfield and Martin absolutely cease, and for good reason. One elevates his game and seizes the moment. The other, simply, has been unable to do this.

For so many players, reputations are forged in the heat of finals football. Martin has stamped his authority on the AFL Finals series twice now, and his two Gary Ayres Medals sit nicely alongside his two Norm Smith Medals as a result. Whilst Dangerfield has had wonderful individual games in finals (39 touches and a goal v Sydney in 2016, and 26 touches and four goals v Sydney in 2017) he is yet to have a series that cements him as a consistent big-game player. And he has yet to take the step into the coliseum on the grandest of all footy stages.

Despite Franklin’s inability to secure a flag for the Swans, he has had the experience of being his side’s best performer in a losing Grand Final (2016). He gave his team every shot to get it done. Danger is yet to have that moment, and it is something that he needs to correct.

So the equation for Dangerfield seems simple – so much simpler in theory than it is in practice. To be considered the equal of Dustin Martin; his supposed contemporary, the Cats star must deliver on the biggest stage. Dangerfield needs a Grand Final. He needs a premiership. His legacy needs one. The problem now, as it has been for the Cats since 2011, is getting there.

Has the ship now sailed for the Cats, and is Danger standing on the pier wondering where the time and opportunity went?

Patrick Dangerfield will turn 30 during the 2020 season. Though he has shown no signs of slowing down just yet (if we don’t count the multiple times he looks as though his season is over only to return to the field minutes later), no man beats Father Time. With his heir apparent in the midfield, and the man who pushed him as the best midfielder in the team in 2019, Tim Kelly, now playing for West Coast, many are speculating that Geelong’s time as a contender may be coming to an end.

But then again, people have been speculating this for years now. To paraphrase, for the past few years, rumours of Geelong’s demise have been greatly exaggerated. They will be a finals team again in 2020, but how far they go will largely rest on the shoulders of their best player.

Patrick Dangerfield is a star of the game. He is one of the top players of the last ten years, and can tear a game to shreds with his explosiveness and speed. If you were building a prototype midfielder, you’d be hard-pressed not to use Danger as the model. He has everything you’d want if you were designing the perfect mid.

Except the September CV to go along with it.

Some players have been able to raise their games to new levels after turning 30. Shaun Higgins has done just that over the past couple of seasons. Travis Boak did it in 2019 as well after a move back into the midfield. Having already scaled mountains most players will never ascend, Dangerfield does not have to reproduce his 2016 season by any stretch to be recognised as one of the greats. Truth be told, he has already done enough to be held in that regard, but after all is said and done will he be satisfied with people adding “but he was never able to lift his team in finals” to the conversation?

2020 is shaping as a wide-open race for the flag. Richmond are the favourites and rightfully so, but halfway through the 2019 season, they looked anything but the team that would ride a 12-game winning streak to the premiership. Brisbane leapt from nowhere into second place, West Coast, Collingwood, GWS and the Western Bulldogs would all like their chances, whilst Hawthorn, North Melbourne and Melbourne, in particular, would be eyeing a return to finals. On any given week in the finals, anything can happen, and Geelong are now at that stage with their champions ageing (Selwood is 31, Ablett is 35) that they need to make it happen now.

What he does need is to play his best footy at the right time of year.

But really, that’s been the problem, hasn’t it?

Guys, there is a heap more content for members, and as we head to the 2020 season, we’re going to try to give the best value for money we can. Please consider supporting our independent, non-gambling ad site by becoming a member. Click the pup below and support The Mongrel in 2020.