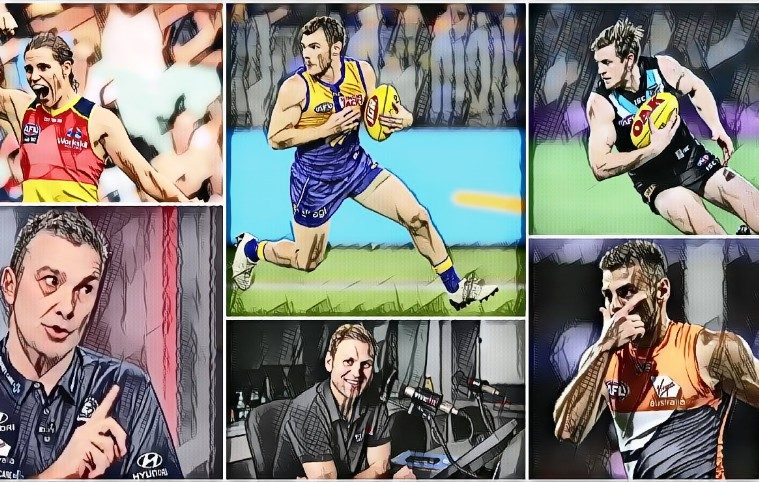 Ah, the off-season. A time when we can all put our feet up, relax, and not have footy thrust into our faces, right?

In the span of a few days, we’ve had club legends moved on, captains step down, Port making their break of tradition in 2019 a complete waste of time, and the AFL have floated the idea of shortening the half time break from 20 minutes to ten minutes.

So, there goes the idea of sitting back and relaxing.

Let’s work through them one at a time.

This is the good news story. After re-signing with the Giants and resisting the impending big offers from the south, Coniglio has been rewarded with the captaincy. He’ll be a different kind of leader than either of Phil Davis and Callan Ward, but that doesn’t mean he’ll be any less successful.

If anything, he may be more successful.

I feel it is important to pay respect to the two blokes stepping away from the role, particularly Phil Davis who has been a tower of strength over the past 12 months. No disrespect intended to Callan Ward at all, but Davis was able to be the leader on field that the Giants needed last season. His efforts to stem the tide against both Brisbane and Collingwood were huge in the finals, and though he will now never be a premiership captain, his deeds should not be forgotten.

So, was the captaincy part of the Coniglio deal? We can only speculate, but I wonder whether that carrot was dangled for him as negotiations took place. For someone with leadership aspirations, a move would have slotted him into an established leadership pecking order, and it would be unlikely he would have been made captain at a club like Carlton with players like Cripps and Docherty already entrenched in the role.

The fit at GWS is perfect, and as Coniglio is now the poster boy for loyalty and the rewards associated with it. Premiership captain, Stephen Coniglio… has a nice ring to it.

This one came out of the blue, and truthfully it annoys me a little because I wanted to see Hurn be named the All-Australian captain at some stage. That said, given the way t AA selectors assess things, he is probably MORE likely to earn that honour now that he has stepped away from being an actual on-field leader.

No, that’s not a swipe at Fyfe. More so at the selection of Buddy two seasons ago. No, I won’t let go of it.

Hurn is a bit of a throwback as a leader. He’s no-nonsense and one of the most reliable players in the game. Unlike Davis and Ward, he will go down in history as a premiership captain; a huge FU to those who didn’t reward his leadership in 2018 despite being the only captain in the All-Australian team.

As I write this, Luke Shuey has been named as the new Eagles captain, which is probably the correct decision. Shuey is blue and gold through and through and has been there in both the good and bad times.

If you want to see Shuey’s leadership on display, keep an eye on fox footy for when they replay the Round 15 games against the Hawks. His end of game stat line is impressive – 39 touches, nine tackles, 11 inside 50s and 11 clearances, but it is in the last quarter that Shuey demonstrates his class. He puts the Eagles on his back and wills them over the line against Hawthorn.

West Coast won by seven points. Without him, they lose this game.

STEPHEN SILVAGNI MOVES ON FROM CARLTON

Hasn’t this turned into a shit storm? You’ve got a club legend, the AFL full-back of the century (who is often denounced as this by supporters of Carlton, who claim Geoff Southby was a better full back) leaving the club after one of the biggest list rebuilds in recent history and the club releasing a statement addressing the issue of him holding such a prominent position in regard to the list, with two of his sons occupying spots on it.

I have to say, I understand the thinking behind not having Silvagni in the position he was in. It compromises the staff’s ability to make decisions pertaining to both Jack and Ben Silvagni, with their father’s presence in the next room at best.

On the flipside, you can understand where SOS is coming from. There was no issue when the club was picking these boys up late in the draft (picks 53 and 70 respectively), so what’s the issue now?

Well, could it be that someone may have wanted to move one of the boys on this trade period, but with their dad in the position of overseeing the list, didn’t want to step on toes? Could a move in the future be on the cards?

Then there was the story about Carlton CEO, Cain Liddle courting players without Silvagni’s knowledge… something stinks in all this.

Carlton have been a fragmented club so often over the past 20 years, and even further back, but success wallpapers over a lot of cracks. There have been issues at board level that have bubbled away behind the scenes for years. You often hear the word “powerbroker” when Carlton politics are discussed. I thought the club may have left that behind. Apparently not.

Silvagni’s family ties, Liddle’s wants and needs, and perhaps the wishes of other staff at Carlton were enough for the Blues to cut loose one of their favourite sons. Some hate it, some understand why. I can see a little from column A, and a little from column B in this scenario. Where do you sit?

And hasn’t Jack Silvagni been eager to social-media himself into trouble over it all?

Well, breaking a million-year tradition was certainly worth it.

Last year the Port Adelaide footy club named co-captains for the first time in their history. Tom Jonas and Ollie Wines both had a capital C next to their names when they played.

But only one acted like a captain who deserved the honour.

Tom Jonas retains the captaincy heading into 2020, and Ollie Wines has not, which is probably right given not only the year Wines had on the field, but off it before, and since.

Wines missed the first couple of games after injuring his shoulder water skiing in the off-season. He was later linked, via his management, to Carlton. It was reported that Wines’ camp was testing the waters about a potential move east. This was shot down, but those reporters… they don’t just make stuff up, do they?

I’m a big believer that where there’s smoke, there’s fire, and for me, the fact that Ollie Wines is heading into the 2020 season without the captaincy is a clear indication that the club is nowhere near pleased with him. This needs to be a season of redemption for Wines. He has to demonstrate to the Power that he is committed, and is taking his footy (and his role at the club) seriously.

They need someone in that 24-25 age bracket to stand up. Their best players in 2019 were either 30+ or younger than 20. Wines needs to bridge that gap and be the player the Power need him to be. Even if he cannot be the leader they thought he could.

THE AFL WANTING TO SHORTEN HALF TIME

Has Steven Hocking ever heard an idea he didn’t like?

“None of them increased scoring.”

AFL games take a long time. It’s a two hour game without the breaks, and we all know that if we’re watching a game of footy, it’s gonna take about two and a half hours. That’s what the sport is. That’s the game.

I read someone on twitter stating that basketball has it right. That the game goes for two hours maximum. Yeah, that’s right… but they only play for 48 minutes and so much is taken up with bullshit timeouts and score reviews, and if a team hasn’t taken a timeout in a while, they take “official timeouts” to get their advertising in. It has definitely not got it right.

So, what are the benefits of a shorter half time break?

Less cool down for the players is one. There is less sitting around waiting to start playing again.

The entire game is sped up by ten minutes. Wow… what will I do with all this extra time?

And what are the drawbacks?

Supporters in attendance are basically forced to rush from their seats to hit the toilets, the bar or the food vendors and somehow get back to their seats in time for the second half. At a big game – let’s say the ANZAC Day game, there’ll be 90,000+ all trying to do the same thing.

There is also less advertising revenue for broadcasters. Look, I really don’t care if sport betting agency number one doesn’t get a second ad during half time, but they might (Mongrel Punt – gambling ad free, by the way). This is a loss in revenue.

I’ve heard others lament the lack of time to discuss the game, to go see friends at the venue to catch up, and basically, to enjoy themselves.

So, the AFL are thinking of shortening the game by ten minutes in a move barely anyone wants, or has discussed.

CHELSEA RANDALL DOES HER KNEE

This is a tragedy, not just for the Adelaide Crows, but for AFLW. The league is a stage where it desperately needs its best players on the part to showcase what the women can do. It was apparent in the 2019 finals series that Randall was one of the best players in the league, and had the ability to read the ball in flight as well as, or better than, anyone else in the comp.

When Erin Phillips went down with an ACL injury, that was bad, but seeing Randall go down with the same injury in the same calendar year is a devastating blow for the league. That they are both on the Crows is cruel – it would be akin to the West Coast Eagles losing both Jeremy McGovern and Jack Darling to knee injuries. Or perhaps Dustin Martin and Jack Riewoldt at Richmond.

It is horrible luck for Randall, the Crows, and AFLW. I want to see the best the league has to offer, and a competition without Chelsea Randall doing her thing is a competition that is worse off.

BRISBANE OFFERS KANE CORNES THE CHANCE TO TRAIN WITH THEM

Cornes has predicted that Brisbane could follow Melbourne’s form line of 2019 and plummet in 2020. The news filtered through to the Lions, and they responded by inviting Cornes to come up and check out their pre-season camp.

Cornes, who is running marathons in his spare time these days, is no slouch when it comes to fitness. He has welcomed the opportunity and is looking forward to getting up to Brisbane to check out just how they’re travelling.

On SEN radio station, Cornes backtracked on his comments that the Lions may have been getting ahead of themselves.

“They will not be getting ahead of themselves, they’re working and training hard, they want me to witness it.”

I’m sure the Lions will welcome him with open arms.

“Fair to say they weren’t happy.”

Guys, I know I bang on about our Patreon content… good news – we’re bringing it all in-house in the very near future (just in time for Xmas presents). We will still be producing a heap of free content, but there will soon be a members-only section of our site to replace our patreon content. Keep your eyes and ears out.