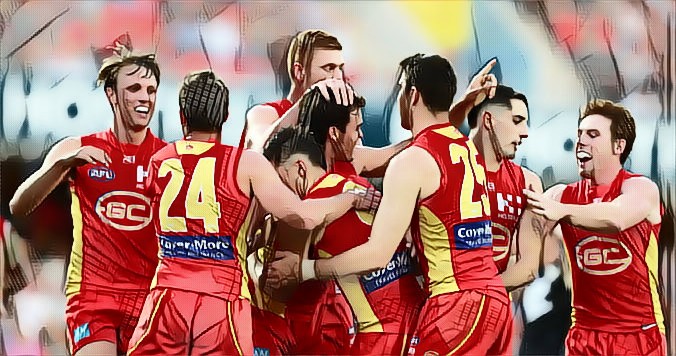 The Strange Existence Of The Struggling Suns

The emergency assistance package to rescue the struggling Gold Coast Suns, viewed as a ‘last-chance’ bid for the Suns to prove they can be a competitive AFL club, is already having unintended consequences. The first signs of Gold Coast’s increasingly strange and manufactured AFL existence for 2020 and beyond have been brought to the forefront in the Jack Martin trade saga.

The 24-year old Martin, who was Pick One in a special ‘mini-draft’ back in 2012, has walked out on Gold Coast after refusing to re-sign with the club after a trade to Carlton fell through. Carlton was the club that was forced to wear most of the backlash for the should-have-been-trade, since this perceived failing was coupled with the hopes of attaining wantaway Swan, Tom Papley which too was not completed. Although, the best-case scenario has unfolded for Carlton, they are set to get their man for nothing more than a pick in the pre-season draft. Albeit, Martin will come with a significant price tag to ensure Gold Coast and Melbourne (with Picks one and two in the pre-season draft respectively) cannot highjack the Blues’ plans.

Martin will earn approximately $600,000 per year in a heavily front-ended five-year deal. The Age has reported that Martin is set to pocket over a $1 million in the first year alone. Which begs the question, how did the Gold Coast Suns let a player walk to a club – that clearly rates him highly – for no return whatsoever? Carlton are set to reap the rewards of a best-18 player in the pre-season draft again like they did in 2003 when Port Adelaide denied Nick Stevens a trade to Collingwood. But the Power’s call to let Stevens walk for nothing was different. Stevens angered teammates when he joked with Magpie opponents during the 2003 preliminary final about playing with them next year. Port made a cultural statement and sent Stevens to the pre-season draft where he ended up at wooden spooners Carlton. But if Gold Coast’s decision to let Martin walk for nothing was based on making a cultural statement, then that is baffling. The Suns have had ample opportunity to make a statement to stop the mass exodus of their playing group, with contracted players who wanted to walk – including a club captain – yet they didn’t. There’s no point doing it now with a player who does not have a contract but does have trade currency.

This perplexing decision is an example of how Gold Coast is not functioning or existing like a regular AFL club. Club rivals were increasingly frustrated during the recent trade period that the Suns were difficult to deal with, as they were unwilling to accept draft picks because they already had such a large number of picks. But this was not as result of any form of good management. On the contrary, it was due to AFL assistance designed to give the franchise one last crack to succeed at AFL level before decisions about the club’s long-term future get much pointier.

Gold Coast were given an extra priority pick at the start of the draft to ensure the club had picks one and two to select Oakley Chargers teammates and best mates Matt Rowell and Noah Anderson as a pairing. Other priority picks include Pick 20 in this year’s draft, Pick 11 in 2020 and Pick 19 in 2021. But it’s not as if lack of top draft picks has been Gold Coast’s underlying problem. In fact, this month’s draft will see the Suns select their 20th top-10 pick.

Gold Coast’s request for an increased salary cap was denied, but the club has been given an extended list compared to the rest of the competition. The club can have 10 rookies compared to the standard four to six.

The AFL’s assistance package is fundamentally flawed. It is not giving Gold Coast the best chance to survive as a competitive AFL team, per its sole intention. Instead, it is forcing the club into more of an isolated existence where it is not functioning as a normal AFL club.

Instead of offering the club different rules, the AFL could have – and should have – given the club’s football department more support. Gold Coast are spending $1 million under the football department soft cap for financial issues, according to journalist Caroline Wilson. How is that going to give the club a chance to be competitive?

The release of the AFL fixture also condemned the club to further isolation. Not one game on national free-to-air TV is extraordinary. Unless you are one of the 30 per cent with Foxtel, you will not be able to watch Gold Coast on TV all home and away season in Victoria next year. Not once. That is not a normal existence for an AFL club and significantly damages any sponsorship prospects, let alone opportunities to expand your supporter base. It certainly does not help the player retention issue either – an issue far greater than a lack of draft picks.

If the AFL does not stop treating Gold Coast like a burden on the competition, I struggle to see how the club can grow to become anything more than that. How can Gold Coast prove they can be a competitive AFL side, where their rules are tailored so differently?

It’s a strange existence and one that is still vulnerable unless things can change quickly.