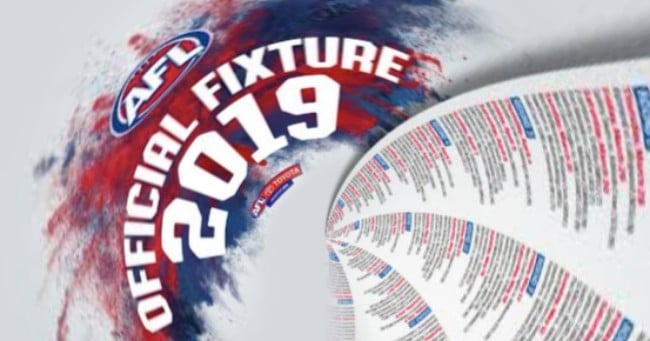 The AFL fixture is unfair.

For a competition seeking to become fairer and more equal, its draw remains its biggest stumbling block. 23 rounds, 22 games per side and 18 teams certainly makes for an exceedingly difficult maths equation. Yet, it is not impossible to solve.

There is a way to ensure that there is an equal and fair draw that even makes for a more exciting season with less ‘dead rubber’ games. This is achieved without damaging the broadcaster’s demands of a 22-round fixture and in fact is even more appealing for broadcasters through an expanded floating fixture. Furthermore, it also rectifies the competition’s second biggest structure problem which is the AFL draft order. This radical proposal promises a lot, but it does deliver, and is in the drawers of AFL CEO Gillon McLachlan’s desk. It’s time for fans to re-think, the 17-5 fixture model.

The crux of the AFL’s fixture problem is that it is stuck in 1986. In a league that has changed in almost every facet since the 1980s, its name included, the draw has remained the same. In fact, it was a genuine ‘draw’ back in 1986 when the then VFL was still a 12-team league where every team would simply play each other twice, once at home and once away. Hence, the 22 rounds. The 22 round structure is no longer appropriate now that the competition has ballooned out by another six teams and three states. The problem is the draw has not grown with the rest of the competition. And this is understandably so – a 34 round plus finals season would be a 10-month long affair. We’d still be going now.

Clearly, that method is not going to work. But how about a concise 17-round season where every team simply plays each other once? At a time where broadcast rights are extremely delicate and vulnerable, this is not going to cut it. Winding down its fixture is not going to be sustainable for the AFL. CEO of the league, Gillon McLachlan said as much in an interview with AFL Media’s Damian Barrett earlier this year.

“I don’t think it (a 17-round season) is possible… you get less you, you pay less… there is a theory of better but you are still going to lose in aggregate attendance, eyeballs, ratings and crowds. There will be almost a binary drop off in revenue.”

But just because an even 17-round fixture is out of reach does not mean the AFL should settle for a dud fixture structure such as the one we have now. It is ridiculous that teams are significantly advantaged and disadvantaged so arbitrarily by the schedule seemingly based on nothing. The five double-up games consistently make or break seasons and can mean the best teams miss out on finals as a consequence. Nobody wins out of that.

In 2019, Brisbane and Geelong received the third and fourth softest fixtures (based purely on the ladder positions of the opponents they played twice) and finished second and top respectively. Whereas, Hawthorn just missed the finals by a game but had to contend with the hardest draw out of any team. Melbourne too received a very tough fixture (fourth hardest) and subsequently crashed from a preliminary final to 17th. How great an effect the fixture had on these results is had to decipher exactly but it certainly had an impact.

Which brings us to the 17-5 fixture model.

Under this proposal, which is being considered as an option, every team will play each other once in the first 17 rounds with the home and away sides being alternated each year. Pretty hard to argue with that logic.

The middle six fight it out for the two last remaining spots in the finals, while the bottom six duke it out for draft picks in order to finally give value to end of season ‘dead rubber’ games. You’re playing to win in this bracket – the higher you finish, the better your pick. This can make ‘tanking’, which has been a major headache for the league, a thing of the past. Will teams be as eager to put the cue in the rack when a win means a better draft pick?

The fixture for rounds 18-22 becomes a floating fixture decided after Round 17 which is ideal for broadcasters, and fans who have been scarred by one too many Carlton Friday night games last season.

In my view, this alternative is more desirable than simply a 17-round season anyway. Not only are there more games, but matching the best teams against the best in the final five rounds means that it will produce more exciting – not to mention – fairer finishes to the season.

Having teams earn draft picks rather than receive them as gifts for losing matches is also a key advantage of the 17-5 fixture.

A fair competition has a fair fixture, it’s time for the AFL to get with the times.