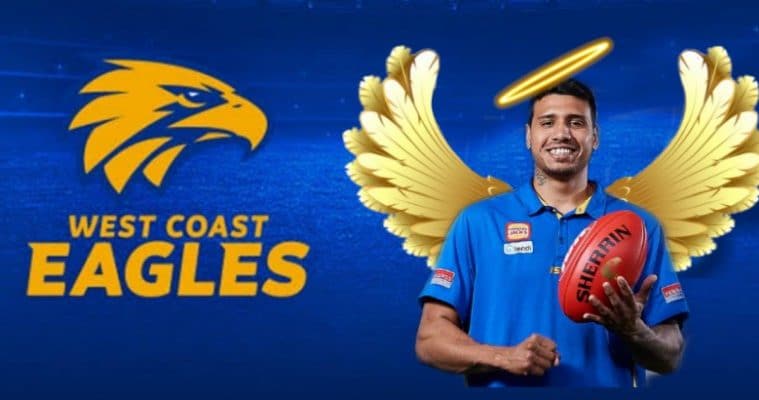 Some Eagles fans have already started enquiring about Grand Final tickets for 2020 after their biggest get in a trade period since scoring a young, unknown forward named Josh Kennedy and two early picks from the deal that sent Chris Judd to Carlton.

And while they may be getting a little ahead of themselves believing that one man can change their fortune, there is no denying there is a lot of excitement about Tim Kelly donning the blue and gold – as well as a great amount of expectation and pressure.

Tim Kelly came at a fair, but steep cost for the Eagles and the inner sanctum at Lathlain, as well as their supporters, will be expecting a good return of investment.

After bowing out to Geelong in this year’s semi-final, the Eagles will be taking a sizable punt on Kelly giving them that certain je ne sais quoi to raise them for outside contenders to a serious threat to next year’s flag.

It’ll be at least half a decade before we can start to discuss who won the trade, but at picks 14, 24, 37 and a future first (the equivalent of pick #1 and some change), it’s fair to say that the Eagles are more focused on getting their talons on some September silverware than they are about reinforcing their future.

Is the lack of draft picks this year going to hurt the Eagles? Perhaps if Geelong uncover a gem or two with their haul, but for now, the Eagles have a pretty well-balanced list and a good reputation for that much revered term – “retention” – so it’s unlikely we’ll look back on this in a decade and shake our heads in disbelief.

Is Kelly worth the price tag?

Kelly came at a King’s ransom, so of course there’s speculation about whether overs were paid for a player who has only been in the system for two years. However, in those two years his star has quickly risen, securing a pair of second place finishes in Geelong’s Best and Fairest and grabbing fifth in the 2019 Brownlow.

And all this was achieved at Geelong Football Club, who are not only laden with talent, but who took out the minor premiership and were a just few kicks shy of the big dance. That makes his ascension even more remarkable.

Players simply can’t achieve that kind of success without being a genuine star – but whether Kelly can replicate his performance in a team with a different game plan remains to be seen. The Eagles will be hoping he can – because if we’re talking about Kelly’s Brownlow contention half way through the 2020 home and away season, we’re also probably talking about Eagles being flag favourites.

Where does Kelly fit in?

This is the million-dollar question. Can Kelly have the desired effect and push Eagles towards their second flag in three years? The biggest difference between the Geelong and West Coast midfield is West Coast are very structured in their approach, while there is a certain amount of improvisation in the Cat’s game. The Cats’ game is also a lot more aggressive through the middle, which might account for their success early in the 2019 season when clubs were still trying to figure out the 6-6-6 rule.

Kelly synergised with the Cat’s game plan very well as he is a contested beast in the guts, with the ability to get the ball out of the centre quickly and catapult it towards goals. And although the Eagles midfield is packed with stars, it’s exactly the ingredients the Eagles need to cook up something tasty as they have ranked poorly in contested possessions for the last two seasons, only elevating that stat briefly in the 2018 finals season … and to paraphrase Mark Lecras, I think you know what happened.

The Eagles have a more structured style to the Cats, which is a double-edged sword. It’s beneficial because their slow and deliberate kick-possession style seems to be a counter-strategy to the fast-moving nature of today’s pressure and burst game. However, as shown in the 2019 season, it’s also becoming their Achilles’ Heel, as teams set up to disrupt it. You don’t have to look past the games against Lions, Port and Hawks to see the weaknesses of that particular set-up, and if they continue to go about it again next season, a few more upsets will be brewing.

However, I don’t think will be the case. The Eagles will change their style, particularly around the centre, allowing players a bit of freedom to get the ball out during centre bounces in Richmond-esque devil-may-care attitude, simply because of the weapons they now have – Nic Nat, Yeo, Shuey and now Kelly – all gutsy, game winning players who aren’t afraid to run and gun. With this in mind, I suspect they’ll give up on the tagging prowess of Hutchings for another attacking mid and the premiership player might see himself out of their best 22. Perhaps the two-way running of Yeo is enough of a defensive presence in the middle?

What Kelly also brings to the Eagles is focus from opposition taggers. Kelly will inevitably be targeted for the majority of 2020 based on this year’s form, but what that does is free up the likes of Shuey, Yeo and Gaff to do a lot damage. The Eagles midfield is often determined by confidence – when their tails are up, things generally go very well for the Eagles. Kelly can help with that simply by taking the heat.

There is a heavy weight placed on the shoulders of Tim Kelly – he’ll be under media scrutiny all season, particularly if he has a slow start. However, pressure doesn’t seem to affect Kelly too much – if he can play the way he did this year with all the stress of home life, just imagine what is he capable of when he is being supported at home.

Is he the Messiah for the Eagles? Realistically, he’s going to improve the dynamic of the squad, but is he good enough to help secure another premiership? I think he is, but there’s a lot of ‘ifs’ attached to that – if the Eagles stay healthy, if the Eagles get a favourable draw and if Adam Simpson and the coaching staff are able to use Kelly to his maximum potential. Whatever the result, it will definitely be the talking piece of 2020 from the minute he runs out in blue and gold.