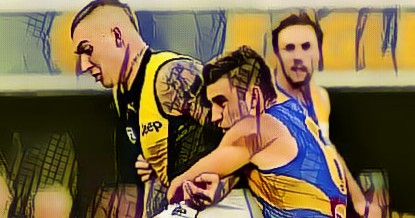 The Pivotal Moment The Tigers Flexed Their 2019 Muscle

For some teams it is a slow build towards a premiership. For others, you can pinpoint the moment it all clicks.

There will be many articles written about the Richmond Football Club this season, with many looking to cash in on the success of the Mighty Tigers (me included – ebook chronicling their season coming in the next couple of days!) but as someone who watched the Tigers go from being struggling first half performers into dominant premiers through July, August and September, there is one moment that stands out.

It was the MCG in Round 22. Richmond were riding a seven game win-streak. They were rounding into the kind of form that started to spook many a team, and the starts were starting to shine. Tom Lynch was tearing games apart, Dustin Martin was displaying signs that he was about to emulate the feats of 2017, and the usual suspects were doing their thing.

Dion Prestia was cementing himself as the best, and most consistent ball-winner at Punt Road, whilst Dylan Grimes stepped into the role of General in the Tigers’ defence, more than ably filling the shoes of the best defender of the past five years, Alex Rance.

But there loomed a challenge in Round 21 that seemed to offer so much more in the way of gauging where the Tigers were at than the run of wins over Hawthorn, Gold Coast, GWS, Port Adelaide, Collingwood, Melbourne and Carlton could. In this round, the Tigers ran into the then-reigning premiers, and the gauntlet was to be thrown down at their feet.

By this stage of the season, Richmond were on the tips of many tongues in relation to flag favouritism. They had pulled things together after a rocky start to the season, and no matter how you look at it, they were rolling toward September.

Yes, yes… “one week at  a time” and “we’re not looking too far forward” – we all know the standard lines, but the Tigers and Eagles were eyeing each other off for weeks prior to this clash.

For Richmond, the wins against Collingwood and GWS should have been enough to convince people as to their claim as a genuine contender, but some needed a little more evidence, and were waiting to see what the Tigers could offer against the champs.

And at the end of the first quarter, those hold-outs might have been smiling a cocky, satisfied smile, thinking that the Eagles had exposed the Tigers.

West Coast jumped out of the gates with a seven goal first quarter blast, and when Damien Hardwick approached his charges at quarter time, he knew what he had to do. He had to light a fire under his charges.

And throw some petrol on it.

This was almost the same scenario as the game between the teams in 2018. The Eagles got the jump and looked like they were going to run away with the game, but the Tigers reeled them in in the second quarter. Hardwick knew his team was capable and he gave them the message, and the tactics to reverse the trend. He’d done it in 2018, and the Tigers responded, for a quarter, anyway. And he did it again in 2019, for a much more sustained result. He needed his boys to stand up – this was a game worth more than four points – it was season-shaping.

As the Tigers ran out onto the MCG to start the second quarter, their moment had arrived. This was the stand they needed to make – the challenge they had to overcome to prove their premiership mettle. West Coast, on the back of a blistering run and carry attack, had asked the question – now it was up to the Tigers to answer.

The arm wrestle was broken five minutes in, as Shai Bolton opened the scoring, and the crowd sensed a Tiger revival. Tom Lynch followed soon after with a goal of his own before a Willie Rioli snag was answered by a Jack Riewoldt goal. The Eagles were counter-punching, but the Tigers were refusing to go away. And at that point, they’d taken the Eagles’ best.

Richmond may have only scored three goals in the second quarter, but importantly, they had seized the momentum, and stopped the West Coast run dead in its tracks. The Tigers had turned the screws, and were starting to play the game on their own terms. This wasn’t as though they were surprised by an upstart team who didn’t really play the MCG well – to the Eagles’ credit, the Tigers saw them coming a long way off, and they played so well that many would have had visions of them holding the premiership cup in back-to-back celebrations at that point.

But Richmond would not do what so many other teams would have in the same situation. They would not lay down. The Richmond Football Club started digging deep and flat out refused to be easily beaten on their home turf.

As well as the Eagles started, the Richmond pressure, combined with some welcome second half rain, gave the Tigers the ascendancy. West Coast would rally, but to no avail – the Tigers would win by a goal and set up their assault on the top four, and the flag.

That result was pivotal in the context of the season for both the Tigers and Eagles. It set Richmond up for an eventual double chance, and landed the Eagles in a position that would severely dent any September ambitions they may have had.

Richmond would go on to be premiers, and the Eagles, after losing to Hawthorn in the final round, saw themselves finish fifth, and three games after they were overrun by the Tigers, their season was ended by Geelong.

There was no September rematch , no opportunity to even the score. The Tigers set the Eagles on the road to defeat in 2019, and at the same time, set themselves on the path to success.

And the brutal defeat of Greater Western Sydney will go down as one of the most dominant Grand Final performances of all time. In the minds of many Tigers fans, any of those wins will take precedence, but if you want to go back to the game the Tigers stamped their authority on the 2019 season, it was Sunday the 18th of August, when they took the best punch the Eagles could throw, shook it off and fired back with their own barrage.

It was the battle of the 2017 premiers and the 2018 premiers, and it was won by the eventual 2019 champions. It was everything you’d want from a home and away game, and in the game of the season, the Tigers prevailed.

Scratch that… in the game of the season, the 2019 Premiers, Richmond Football Club prevailed.