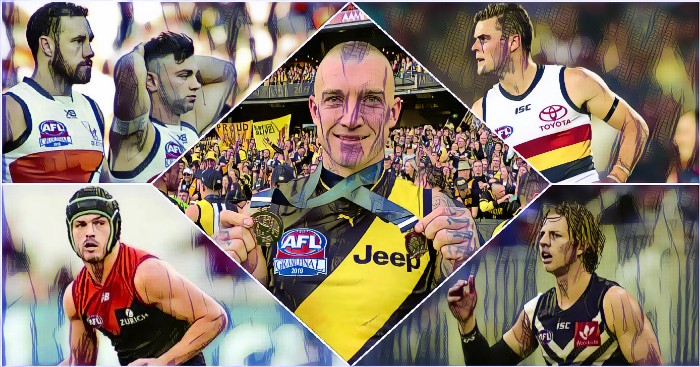 Ten Things I Learnt From the 2019 AFL Season

TEN THINGS I LEARNT FROM THE 2019 AFL SEASON…

Before I get into my ten points, I just want to thank everyone who has taken the time to read my articles each week.  I appreciate the comments, even the negative ones.  I’m open to criticism, but anyone who really goes hard needs to know this is essentially an opinion piece, and, for the most part, very tongue-in-cheek.  Anyway, here are my ten points for the year to finish off!

I remember the talk during the JLT was how this rule was freeing up the game and scoring was going to happen more freely.  It was obvious by Round five or six that the impact was almost the opposite, as generally the scoring average dropped across the board on previous years.  I guess they got ahead of themselves really.  I mean, let’s face it – it only affects the setup from a centre bounce, and even that lasts ten seconds before the players have moved out of position.  In most cases it takes a lot longer than that for a side to achieve a clearance, so the likelihood of finding an open forward line with six players one-on-one with their respective opponents would rarely happen.  I’m thinking possibly two to three times a game?  Who knows?  I’ve never studied it closely enough, but based on the scoring and the level of congestion still prevalent in our game, I reckon it wouldn’t be many.

2 – CONSIDERING HOW MUCH MONEY WAS SPENT ON THE EXPANSION CLUBS, IT SEEMS THE AFL REALLY DIDN’T DO A GREAT JOB.

On the one hand, most foundation-club supporters are a bit resentful of the AFL spending literally tens of millions of dollars creating the Suns and the Giants.  But, most of us would’ve thought that with such an investment they would’ve been training and playing in state-of-the-art facilities from the start.  So it came as a shock when I learned of the early days of both teams training initially on little more than suburban grounds and changing in portable rooms.  Sure, things are better now, but wouldn’t you put that stuff in place before you send a bunch of kids out of their home state to play football for an untried team?  The Giants have better management clearly than the Suns.  From the outside looking in, it seems the AFL set both clubs up, gave them some money and left them to their own devices.  I think the Western Sydney experiment will work, but so many franchises on the Gold Coast have failed.  If you listen to the noises coming out of that club, it paints a picture of a club whose predicament doesn’t seem to get the true attention that’s required from the AFL.  I just don’t see how this club can ever rise up.

3 – THE DRS TECHNOLOGY IS MORE TROUBLE THAN IT’S WORTH.

We’ve had the system in place for a few years now, and I’d say it’s been a failure.  There has simply been too many errors.  How can it be that you can be sitting at home and see it clearly being one way when the person who’s in charge of adjudicating via this system sees it the other way?  It’s enough to drive you mad, not to mention the delays during games which we’re slowly getting used to but would appreciate more if we knew the right decisions would ensue.  Maybe we should wait until the technology improves to the point where all human error is removed before we implement it – or is that too creepy?

4 – YOU NEED SO MUCH TO GO RIGHT IN ORDER TO WIN A FLAG, AND A FAVOURABLE DRAW ALSO HELPS.

This will no doubt get the Tigers fans fired up, but it is what it is.  After Round 13 they played interstate just twice, and one of those was against the battling Suns.  The last seven home and away games saw Richmond at the MCG.  This was always going to be helpful.  The other good fortune the Tigers had was the successful return of many injured players in the second half of the season.  Their depth was tested prior to the bye round, but when it really counted, they entered the finals series with a reasonably healthy list and it paid dividends.  This doesn’t diminish their premiership in any way.  All this tells me is that this is what needs to happen before any team can go on and hold the cup aloft on that last Saturday in September.  Luck plays a definite part.

5 – EIGHT TEAMS TO QUALIFY FOR FINALS IS TOO MANY.

I believe the disparity between the top team and the team who finishes 8th is too great.  At one stage it looked as though 11 wins was going to get you into the finals.  That’s just plain silly to me.  Most years the teams finishing seventh and eighth get blown away early as you’d expect.  Yes, the Bulldogs won from seventh, but let’s not forget they did so with 15 wins!  How’s this for a radical idea:  Instead of having a Top Eight, why don’t we just fashion a finals series around however many teams finish with 13 or more wins?  That would’ve resulted in six teams this year, eight last year, six in 2017, seven in 2016, eight in 2015 and so on.  You’d still get eight finalists in a lot of years, and I just think winning 11 or 12 games shouldn’t get you in.  Maybe it’s a dumb idea, but after that Grand Final, I would rather the Giants were bundled out early away from home than serve up that disaster.  Anyway, that’s just an idea.

6 – INTERIM COACHES ALWAYS DO WELL, BUT THIS WAS THE YEAR OF THEM KEEPING THE JOB!

There’s no denying that whenever a club sacks their coach, the temporary guy comes in and there is, for whatever reason, an improvement straight away.  I won’t bore you with the theories on why that is.  I think we all have a bit of an idea.  What seemed to be the case with Carlton and North Melbourne is the length of time the form improvement was sustained for.  Shaw was at the helm for 12 weeks and Teague was there for 11.  As a Carlton supporter, I was happy to see Teague get given a chance, but I’m a little more circumspect than some of my fellow supporters.  You see, what happens if we end 2020 with six or seven wins again?  And he’ll then have another two years in his contract, although that can be meaningless.  Oh boy is he under some pressure, and it’ll be interesting to see how a first time coach copes when the real pressure comes.  I think Ratten should do OK but he’s been there before and shouldn’t have been sacked anyway.  Whatever one thinks of all of these appointments, we won’t know the real worth of the decisions until the end of 2020.

7 – SOMETHING IS VERY WRONG AT THE ADELAIDE CROWS.

After making the 2017 Grand Final and basically not turning up, it seems the psychological blow stayed with them all through 2018 and beyond.  Pyke must have known that it hit them hard, so that’s probably why he dragged them to that infamous off-season camp and we all know what a disaster that was.  The excuse for missing the finals in 2018 was a heavy injury toll.  I bought that, studied the Crows list at the beginning of the 2019 season and earmarked them to rise back up into the Top Four as I was convinced their list looked good.  Even from Round 1’s shock loss at home to the Hawks the alarm bells rang for me.  By season’s end it was clear the coach had lost the players, and now many are looking for a new home.  This may continue to hurt them for years to come.

8 – IT’S HARD TO SEE MELBOURNE BOUNCE BACK FROM THIS DISASTER OF A SEASON.

From playing off in a preliminary final to finishing in 17th position with just five wins is one hell of a fall from grace.  I’d say their pre-season was a disaster, with so many players coming back from surgery and their later than usual start.  I also believe the loss of Jesse Hogan without a suitable replacement hurt them more than they thought it would.  For whatever reason, the club was not scrutinised to the level I feel they should have been.  People are expecting the Demons to recover and have put it down to a horrible year, but I’m not so sure it will be that simple.  I saw some pretty big holes in their playing list this year, and it will take one heck of a trading period for them to be able to fill them all.

9 – THE MRO NEEDS AN OVERHAUL.

Let me preface this by saying I don’t think that they could ever make everyone satisfied via the MRO or the tribunal.  However, especially during the finals series and the whole Greene episode, it became farcical.  The inconsistencies are what kills it for most.  And also the suitability of punishments.  Hawkins getting one week for clipping a guy’s jaw while someone getting the same for rough conduct or making contact with the face minus actual evidence is baffling.  Something needs to be done.  It seems the more they try to simplify things, the harder it becomes to understand.

10 – THE BROWNLOW MEDAL VOTING SYSTEM NEEDS TO BE REVAMPED IN ORDER TO GIVE NON-MIDFIELDERS A CHANCE.

I love Nat Fyfe as a player, and I believe he is a worthy recipient of this year’s medal.  But if you look at all those who polled over 10 votes, you won’t see many players there who are not midfielders.  I’ll give you some glaring examples of genuine stars who didn’t attract many votes: Dylan Grimes (three), Tom Lynch (three), Shannon Hurn (three), Connor Rozee (four), Ben Brown (eight), James Sicily (eight), Nick Haynes (five), Tom Hawkins (five), Tom Stewart (three), Michael Hurley (three), Harris Andrews (two).  I mean wow!  That almost reads like a list of all-Australians.  My mind goes back to the ‘87 GF when Norm Smith medallist David Rhys-Jones kept Dermot Brereton quiet and managed just nine possessions, but because of the great defensive pressure he applied all day, he was deemed BOG.  That simply wouldn’t happen these days.  I don’t think the umpires watch the whole ground.