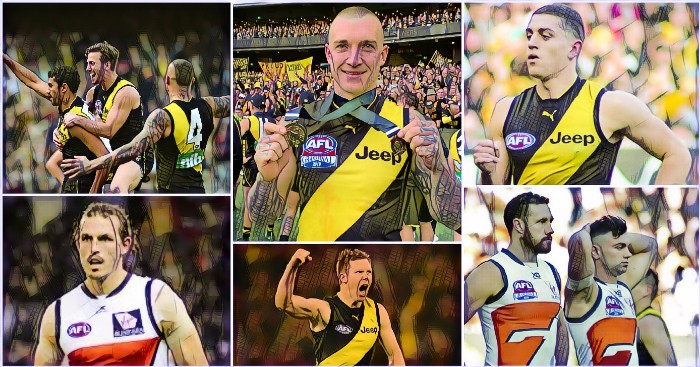 Ten Things I Learnt After The Grand Final

TEN THINGS I LEARNT AFTER THE GRAND FINAL

I heard many criticising the pre-match entertainment. I thought they were great. I was particularly impressed with Tones & I, and Paul Kelly always shines. I’m not sure what people expect. We saw the debacle that was Meatloaf, so at least this year we used Aussie artists and they certainly did the job, even if a lot of the crowd weren’t interested. Chances are they could’ve bought Michael Jackson back from the dead and some people would still be negative.

2- SOME PLAYERS ARE FINE DEBUTING IN A GRAND FINAL

You could see pretty early that Marlion Pickett was not overawed by debuting in a Grand Final. He was clean and his possessions hit targets. When Dusty pinpointed a pass to him 30 metres out from goal which he slotted, the excitement on field spilled over when it seemed obvious at that point the game was well beyond the Giants. It’s a great story of redemption for a bloke who was given a lifeline and now has a premiership medallion around his neck. My only tip to the debutante is for him to consider changing his name to Marlon as it seems most commentators call him that anyway.

When Jeremy Cameron drilled a set shot from outside 50 around 20 minutes into the first quarter and broke the deadlock, some began to wonder if the unthinkable could happen. But their next goal didn’t come until late into the third term. In fact, the previous five Grand Finals saw the team who kicked the first goal of the game go on to lose. So it’s now six in a row, which begs the question whether sides playing off on the last day in September may need to consider conceding the first goal.

Jack would not have been happy about his preliminary final effort, and I was fairly certain a man of his ability and pride would make amends this week. He did so with three second quarter goals when the game was still in the balance and put it beyond the Giants more or less by half time. He helped himself to two more in the last to cap off a very good game after what was a tough season which saw him miss several games with a PCL injury. For most of the year he was content to play second banana to Tom Lynch, but today was all his! Good one Jack!

The Giants tagger went to Dusty earlier and held him to a relatively quiet first term. The only problem was Dion Prestia had helped himself to 11 possessions during that term, which meant de Boer had to look to quell his influence in the second. He did just that, but then Dustin Martin had 3 goals by half time and set up the Tigers win in that second quarter. After half time you could see de Boer had all but surrendered. It’s not his fault. The Tigers midfield just run too deep. You can’t stop Martin, Edwards, Cotchin, Prestia and even Pickett!! The Giants midfield tried. Taranto was great, but even Kelly wasn’t at his absolute best. That said, Matt de Boer can be proud of his season. He became the league’s premier tagger and shut down many stars during the year. He’s become an important member of the GWS squad and has proven a very shrewd pickup.

Davis was by no means terrible, but watching him going through his paces pre-game, it certainly looked he wasn’t moving with fluency. It’s a hard call to say you’re not right to play for a Grand Final, and I guess only he truly knows if he was able to play anywhere near his best. The other puzzling one is Lachie Whitfield. 14 touches aren’t the sort of numbers he’d normally produce, but what was even more concerning was watching him favouring his left side even when he would’ve been able to kick on his right foot. Could it be that his recent appendix surgery made kicking on his right foot painful?  If so, maybe it was not the right decision to play.

Mummy’s been a warrior, and we love the way he goes about it. The signs have been there during the finals. Today, the Nankervis/Soldo combination dominated the hit outs and, significantly, Mumford took a pretty big hit early in the game that he’s usually dishing out to others. There have been whispers he wants to go on, but with Sam Jacobs looking like coming to the club, and with his late season form going south, it’s probably not wise to go on. He’s been great, and we all love the way he went about it, but today revealed he may not be able to compete at the highest level any longer.

After a loss to the Adelaide Crows in Round 13, and with a 7-6 record, it looked as though the Tigers might not be in a position to challenge for the flag, especially considering all the players on their injury list. But once they had the bye, slowly but surely their injury list got smaller and some key players returned. Other than Round 22 against the Eagles, and perhaps the first half of the preliminary final when the Cats jumped them early, the Tigers were rarely challenged. They finished the season with 12 consecutive wins, and an emphatic 89 point win in the Grand Final. It was a testament to their list management, and also shows how much good fortune is required to win a flag in terms of having a healthy list. Either way, all concerned did well to manage their injuries and get them fit enough to play when it mattered.

9 – JASON CASTAGNA WILL BE THINKING ABOUT WHAT COULD’VE BEEN.

It’s fair consolation when you have a premiership medallion hanging around your neck, but I can’t help wondering if Jason is kicking himself today for his missed opportunities. He had six shots at goal which resulted in a total of just five behinds. Judging by the sentiment of most involved at this great club, individual honours are secondary. In fact, at the time of writing this, BT is interviewing Brendan Gale and Peggy O’Neal, whose administration has brought this team together like never before. We laughed at Gale when he claimed five years ago they were aiming for 75,000 members and a premiership. He was wrong.

They have over 100,000 members and have TWO premierships. So you can see why this group are more concerned with team success than individual glory. Although, in a quiet moment or two while celebrating, I think Castagna will be kicking himself.

I normally take a bit of time to write my “ten things” article each week. But I was able to start writing this early in the last as the game was over. I already raised the point that I believe a Top Eight is too many as it rewards mediocrity. I’d be happy with a five or six, but we know that’ll never happen. I personally think you’ll never see another 2016 situation again, where the Bulldogs won from seventh. We want Grand Finals that have two sides battling it out for the best part of four quarters. We want as close to the two best teams to be the final two in the big playoff. This year the top two teams were eliminated.

I think it’s obvious it would’ve been a better game if the Tigers played any of the top five sides. I mean, kudos to GWS for making it through, but this is the result and this is the game that goes all over the world. It’s not a great advertisement, and we could eliminate it by making it harder to make it into September. I know. It’s never going to happen.