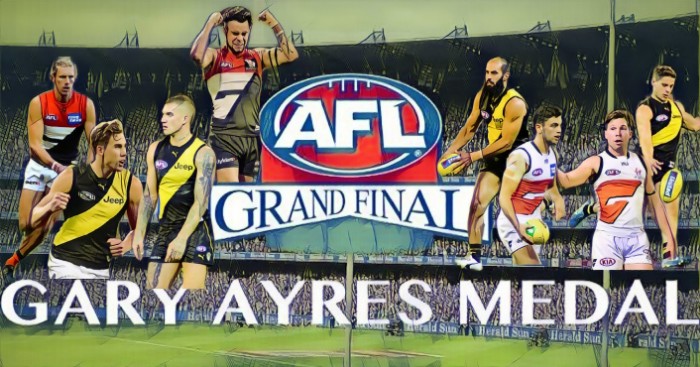 An award that is still in its infancy, yet one that will grow in stature as the years roll by is the Gary Ayres Award.

Judged by the AFL Coaches Association in the same manner as their player of the year award with both coaches voting in a 5-4-3-2-1 system after the game, it has only been in place since the 2016 season and boasts just three names to date – Josh Kennedy (Sydney), Dustin Martin (Richmond) and Steele Sidebottom (Collingwood).

Until the inception of this award, there has been only one award to honour great finals players, and that was only for the best player in the biggest game of the season, with the Norm Smith Medal being one of the awards held in the highest regard by football fans and those inside the game. With the Gary Ayres Medal now in play, we get a better picture of the players who are impacting entire finals series – not just the last Saturday in September.

There are no Shaun Hart-like winners of this award – it requires several, or at least a pair in this case, of standout games across the finals. There is no fluking the Gary Ayres Medal.

So, as we round the corner and turn for home in the 2019 AFL Finals Series, a quick look at the leaderboard gives an indication as to who might give it a shake this season.

Dustin Martin burst from the gates, but didn’t poll a vote in the Preliminary Final, leaving him four votes behind overall leader, Tim Taranto, but there are others right in contention as this season, unlike last year, has more than a couple of players capable of taking the award out.

Tim Taranto racked up the perfect ten votes in the first week of the finals, and picked up an additional three in the Prelim. Toby Greene sits on ten, after his huge semi-final performance and another cuple of votes in the Elimination Final, and Nick Haynes, Zach Williams and Shane Edwards all lurk with nine votes apiece.

A little further down the list, Dion Prestia, Jacob Hopper and Bachar Houli are all a solid finals outing from surging to the top of the table. It’s an interesting little subplot to an already enthralling rand Final, with 14 of the 42 competing players capable of winning this award.

Phil Davis, Lachie Whitfield, Dylan Grimes and Josh Kelly are still a mathematic possibility after picking up lower votes in the first weeks of finals contention, but several  of them would need nobody above them to score heavily to pinch the award, which is unlikely.

So there we go. More than just the premiership is coming down to the last Saturday in September this season. Last year, heading into the Grand Final, there were only two players who could win the award – Steele Sidebottom and Jack Redden. As neither polled in the big game, Sidebottom walked away with the award despite a less than stellar GF outing.

This season, in order to win the award, and with so many names still in the mix, the winner will have to perform in the Grand Final. This is the way it was supposed to be.

The award does have its flaws – lower-ranked teams that make the Grand Final will play an extra game, which could lead to them picking up votes in four games as opposed to another player’s three games, but for now, the system is as it is.

In the years to come, having your name on the list of winners for the best player of the finals series will be an accolade many will aspire to. As of right now, 14 men have the opportunity to etch their name into finals folklore.

So who do you have?

I’d love to see a young gun or a dour defender get up and be honoured. Haynes or Taranto would be great if the Giants get up. And if it’s the Tigers, I’d love to see Grimes have the perfect ten kind of game and take the award home, though that one is unlikely.