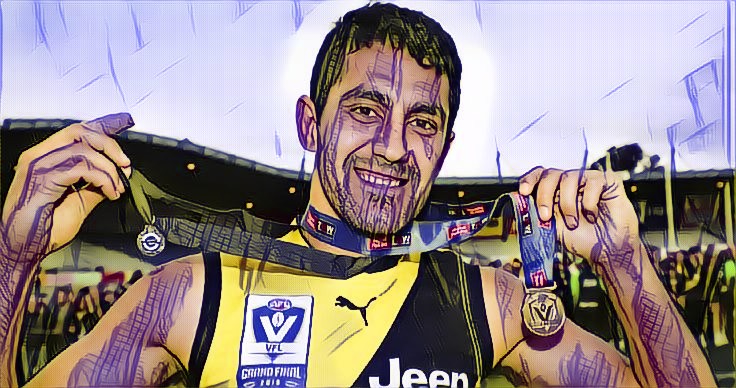 The Selection of Marlion Pickett

The Richmond Football Club dropped a bombshell this afternoon, with news coming through that Marlion Pickett, fresh off a best on ground performance in the VFL Grand Final last weekend, will make his debut for the Tigers’ senior team this week.

In the Grand Final.

The first player to debut in the most important game of the year in the 27 years of AFL existence, and the first since 1952 if we’re throwing VFL figures into the mix as well.

It’s a bold move to say the very least, with Damien Hardwick backing his mid-season recruit in an absolute show of faith in the 27 year old. But what does it really mean, and does this move have the capacity to swing the game in favour of the Tigers?

Or possibly against them?

Marlion Pickett is a natural footballer. It would have taken just a quick look-in on the VFL Grand Final to recognise the talent he can bring to the senior Richmond team, but this is the kind of decision that really could go either way, and impact a number of people at the club.

Pickett has collected two best and fairest awards at South Fremantle, and whilst his ability is not in question, it is enormous pressure to place upon a man to debut in front of over 100,000 people in the biggest game of the year. It has to be asked – what if he flops?

It is not just the immediate impact on gameday that the Pickett inclusion could impact. Players like Derek Eggmolesse-Smith, Kamdyn McIntosh and Jack Ross have all made their case for consideration in the Grand Final line up to replace the injured Jack Graham. DES has two games under his belt in 2019, and KMac has played 16, whilst Ross, who was mooted as the favourite to replace Graham, has seven games in 2019. Both performed admirably in their stints in the seniors, but after being overlooked, you have to wonder whether there would be any hard feelings about the whole situation? They’d done their apprenticeship, and someone else has been chosen over them? Without ever playing a minute of AFL football?

I may be a petty person, but if I were beaten out for a spot in the Grand Final by someone unproven at this level, I wouldn’t be too pleased.

The addition of Pickett will have a huge impact on how Damien Hardwick is viewed following this grand final. It will either be hailed as a masterstroke, or the kind of move that let not just the team down, but the club. Allow me to explain.

Going back many a year, there was a young man who debuted for Hawthorn in a final back in 1982. Brash and cocky, he slotted five goals on debut and it made Alan Jeans look like a genius. Fast forward to the next game, just seven days later, and it was a very different world for “The Kid” as he was restricted to just three touches and no scoreboard impact.

Getting the right version of the right player on the right day can make all the difference.

The difference between the Dermott Brereton debut in 1982 and the potential Pickett debut this weekend is that Brereton had earned a nickname – “The Kid.” Marlion Pickett is a grown man, and the inconsistencies that plague younger players may not impact him the same way. Hardwick and company would be extremely hopeful that’s the case.

Earlier this week, I read a journo stating this year’s Grand Final didn’t have the same amount of buzz around it – that it didn’t have the same great stories of previous years. It makes me wonder just what this journo was thinking. This Grand Final has plenty on offer – the Richmond Redemption, the Toby Greene story arc, the first ever appearance by GWS in a Grand Final, the de Boer v Dusty/Prestia subplot, the leadership of Davis and Cotchin, the emergence of Tom Lynch as the key to the Tigers’ forward line, and the never-say-die attitude of the Giants as they’ve fought it out to get this far.

Now you can throw in the added wrinkle of a mature-age debutant in the biggest game of the season. If you think this game was lacking something until now, whether it succeeds brilliantly, or fails miserably, the addition of Marlion Pickett to the Richmond team for this weekend adds just that little more to a finale that was already filled to the brim with stories.

Now, he just has to deliver. No pressure, or anything…