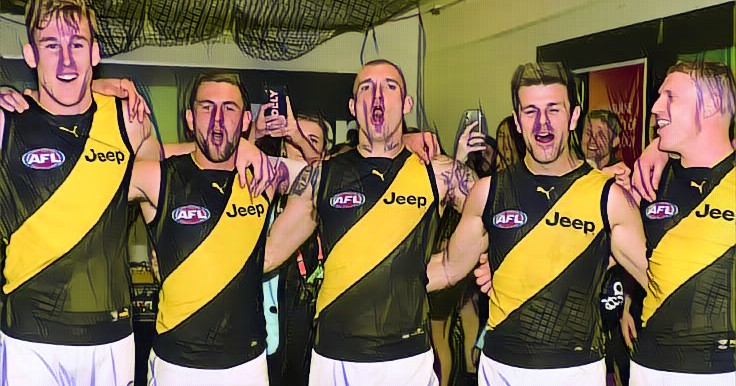 Time For The Tigers To Think About Flags

Fifty-three weeks ago, the Richmond Tigers were the kings of the competition. The then reigning champions were, after such a long-stint as the butt of many jokes, the envy of the football world.

The Tigers were reaping the rewards from the biggest one-year turnaround in football history. A turnaround that was bookended by an embarrassing attempted board takeover after a thirteenth-place finish in 2016 and a drought breaking flag in 2017. With an extraordinary 100,000 plus members cheering them on, Richmond were destined to claim a second flag in as many years. It was like the glory days again.

Indeed, going into Preliminary Final weekend in 2018, you would be hard pressed to find a team that was in a better position to claim the premiership in modern AFL history. Richmond were clearly the best team all year boasting a minor premiership and had already been there and done that the year before. However, most importantly, they had a stunning record at the MCG that bettered any team in any era of football.

Going into last year’s Preliminary final against Collingwood, Richmond had won their previous 22 games – the equivalent of an entire home and away season – at the MCG, in a streak that included their 48-point Grand Final win against the Adelaide Crows. This broke the record of Norm Smith’s Melbourne side of the 1950s who won five premierships from seven straight Grand Finals. A team that is probably the best in VFL/AFL history.

With both the prelim and the Grand Final at the MCG – the Tigers looked a sure thing.

Yet, Richmond not only lost the flag but the opportunity to even compete for it as they were stunningly jumped by Collingwood in the prelim. A prelim upset that even dwarfs this year’s amazing GWS triumph. So, how did this happen – and why will it not happen again? Or most likely not happen again?

On the eve of last year’s finals, the coach of the North Melbourne Team of the Century, Denis Pagan was given the honour of presenting the premiership winning coach with the Jock McHale Medal, which Pagan has twice had around his neck. In what was quite an out there call at the time – and somewhat prophetic in hindsight – Pagan tipped an upset when asked whom he believed he would be presenting the medal to. Pagan backed Adam Simpson’s West Coast Eagles to win the flag going against the heavily favoured and red-hot Tigers. The rest as they say, is history. But what was Pagan’s expert eyes seeing that others weren’t?

“I think the Tigers have had a long while to think about premierships.”

“I’m sure their players would have been thinking about premierships probably from about four or five weeks ago when no other side in the competition had the opportunity to think about it.

“It’s going to be exciting to see what Damien (Hardwick) does to get their minds on the job and play in the present and not get involved in the future.”

Pagan went on to compare the Tigers of 2018 to his Kangaroos of 1998 who were also minor premiers but went on to lose the Grand Final to the Adelaide Crows, who needed to win their last home and away game to even make the finals. Of course, the two times that the Kangaroos won flags in the 90s under Pagan, they did not finish top.

I think there is some serious merit in Pagan’s theory. But that is not to imply, in my interpretation anyway, that Richmond got “ahead of themselves”. It is more an example of how much harder it can be to win the flag as heavy favourites and the pressure that comes with that. There is no doubt that Richmond players would have thought about winning the premiership, or at least making the Grand Final, throughout most of last year. They are human after all.

I’m not sure that is exactly the best position to win the premiership from and the statistics back that up.

In the twenty-four seasons that have taken place after 1995 (including this year), the minor premier has won on just six occasions. A 25 per cent strike rate is not ideal for the team that has been the best throughout the year. The last team to finish top and hold the cup aloft was Hawthorn in 2013, which really just shows how Hawthorn were able to win premierships from difficult and unlikely positions, more often than not throughout their dynasty of flags. This was also certainly the case, during Brisbane’s run of three flags in the early 2000s. The Lions never finished on top, instead the Power continually won minor premierships but were overrun by finals pressure when it counted.

However, Richmond were not just minor premiers last year, but overwhelming premiership favourites; probably the most obvious favourites since Geelong in 2008. The Cats, of course, only lost once all year up until Grand Final day before being upset by a young Hawthorn side on the road to becoming the best side in modern football history. The man who captained that Hawthorn team to glory in 2008, Sam Mitchell revealed in his autobiography the moment in the lead-up to that stunning flag upset that stuck with him.

“Something Cameron Mooney said in the lead-up to the game stuck with me. The Cats had won the previous year’s flag, ending a 44-year drought. Mooney said something along the lines of ‘Last year was for the fans, this one is for us.’ It was presumptuous to say the least. That comment enraged us.”

Thinking about flags can certainly be a curse. History shows that coaches need to spice things up for teams who would be spending a significant portion of the year waiting for September. Essendon under Kevin Sheedy did in 2000 when the Bombers nearly had an undefeated season if it was not for a late season loss to the Bulldogs. Late in the year, the Essendon boys did not sing their song after victories until they eventually won the Grand Final. Just another example of a quirky, but effective Sheedy ploy to master the mental side of the game.

The effectiveness of this ploy is in stark contrast to the Adelaide Crows’ Collective Mind inspired power stance in the 2017 finals series, where they were widely tipped to go all the way.

Richmond premiership coach Damien Hardwick, who will again lead Richmond from the coach’s box on Saturday was a key part of the Bombers’ flag in 2000. However, he arguably had a greater impact on Port Adelaide’s 2004 triumph. Many of his ex-Port teammates credit Hardwick’s leadership as a key factor in the club overcoming the pressure of the infamous ‘choker’ tag that came with three minor flags with no premiership cup.

Here’s how Kane Cornes, who was judged best-on ground in the 2004 Grand Final in Port’s Best and Fairest votes, described Hardwick’s influence in his autobiography.

“Hardwick was a premiership player with Essendon under Kevin Sheedy and it is so important having him there to share his knowledge of what he had been through. We had no-one with that level of experience or composure. Having a bloke like Damien in our group who could walk us through the psychology of it all was invaluable.”

2019 has been by some metrics the most even year in VFL/AFL history. This has especially been the case in the top half of the ladder, as the Gold Coast Suns have been a competition outlier in the bottom half. Nobody has had the added challenge of being a heavy premiership favourite.

Geelong finished top but were far from ominous all year, particularly after the mid-season bye. Collingwood were good in parts but inconsistent. The same with West Coast who missed out on a critical top four spot. Brisbane were the exciting unknown who proved disappointing in September. Whereas, GWS looked horrendous at times. And Richmond, battling a season-ending knee injury to their best defender Alex Rance since Round One, have not been as impressive as last year and needed to win in Round 23 against Brisbane to qualify for a double-chance.

None of these teams would have been thinking it’s theirs to lose during the year. On Saturday, Richmond will return to the MCG on the last Saturday in September and face a very challenging opposition in GWS.

But in the emotions of Grand Final week, Dimma’s boys can safely, in the rare quiet moments of reflection the week provides, cast their minds to MCG on Saturday and the possible outcomes it could provide.

As now it is time to act on their dreams and make them reality.