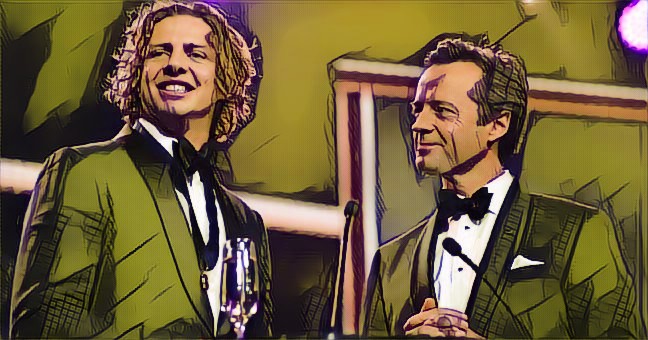 First off, I need to make myself very clear. This is a nonsense article. I literally don’t write anything sensible here so if you’re a serious sort then hop off until one of the other Mongrels writes a piece. I know as much about fashion as I do about football. I mean, I only ever want to wear tshirts, jeans or workout gear, and I don’t know what a small forward is (guy with a slight build who relentlessly hits on people? Yes?)

So to help me out, I am hosting a small get-together with some of the biggest names in fashion and football – I have brought in the EXPERTS. Real ones, not like those tacky ‘here’s the odds’ talking heads.

Ms Barbara Mutton was once paid to be a fashion expert, and uses the word ‘vintage’ with a straight face. She isn’t allowed to comment about actual fashion trends, but is allowed to talk about sporting prowess.

Ms Brigitta Hard-Pass is not a paid fashion expert but she is immaculately groomed. She makes her own clothing and to be honest, sometimes she looks a bit too fancy to be hanging out with me. I am pretty sure she’s our food, drink and etiquette expert.

HB is allowed to be our sports expert tonight, on the proviso that he is absolutely not allowed to correct the other experts on any sporting matter. He is allowed to argue about fashion. Admittedly, he is not the most fashionable man, but he sure has some comfy clothes. He’s a big fan of basketball shoes, and wears sports shorts on about 330 days of the year.

I am not an expert on much – jack of all trades really. The only value I have is to note when people look like other people or things. Pretty much every time HB notes in an article that someone looks like x y or z, it’s because I was being mean about it. I am literally here to be a bit mean. So in true mongrel fashion, let’s start with ourselves…

WHO ARE WE WEARING?

What a useless question. I’m still waiting for someone to say “Target” or “dunno, borrowed it off my sister”. But still, the question is a red carpet staple so I’ll do my best.

Barbara is wearing an op-shop chic dress and is the only one of us that knows how to put on false eyelashes.

Brigitta is in a vintage off the rack ready to wear frock (Savers anyone?). And a wig. Seriously, she’s come here in a wig, it’s amazing. She actually looks like Rosa Diaz in disguise.

HB is in his everyday clothes which are mostly from Kmart.

I am wearing my backup wedding dress (I got both dresses for a total of $150 so I don’t feel too indulgent. Considering I have a toddler, a backup was sort of important). It has flamingos on it. I also had a plastic yard flamingo attached to the back of my dress just for extra flair.

We don’t even know who’s in the running. I like Tom Mitchell. He looks like a peaceful kind of fella, but HB assures me that he hasn’t played a game all season and will NOT take out the Brownlow. Channel 7 kindly shows us who is most likely to win and we all take a fella. Brigitta has Cripps, Barbara has Neal and I have Dangerfield. HB takes Fyfe.

We’re settled in, and ready for the fashion parade.

Barbara came at it first, stating that Nadia Bartell looks a bit like she’s used left-over tin foil for her dress. Brigitta notes that it’s a good thing, and she’s doing her bit for sustainability. It’s the light that makes it look a bit foil-ish. It actually looks quite pretty, though I’m firmly against trains. I mean, if a stack of women have trains on their dresses, then they are literally making an obstacle course for a bunch of dudes in ill-fitted formal shoes. What an error.

HB comes in with the gossip that she’s split with her partner but still doing the red carpet hosting duties. Awkward as all heck. HB pretends he doesn’t care about anything other than the game, but he’s surprisingly up to date with AFL goss.

We are all bemused as to who one particular random guy is – turns out it’s some fella called Conrad Sewell. We don’t know who he is at all. Showing our age maybe? Brigitta thinks that he might be the guy who served her at Safeway who didn’t know what a pear was.

We all agree that the yellow dress that Ana Calle is wearing is beautiful but that collar is just too high. Barbara is off and running talking about yellow turmeric explosions…

Both Barbara and Brigitta shout about self-belts in unison. See, a self belt is a belt that’s made out of the same fabric as the outfit. There’s a bit of trivia you will never use again. Apparently Calle is wearing a self-belt. I didn’t want to ask if there was such a thing as a self-collar.

Bont’s hair is the talk of the room. I don’t understand how he didn’t look at his hair from the side. Has he ever seen it before? Does he think people can only see his front? Brigitta notes that he looks like he came to the Brownlow in a convertible. 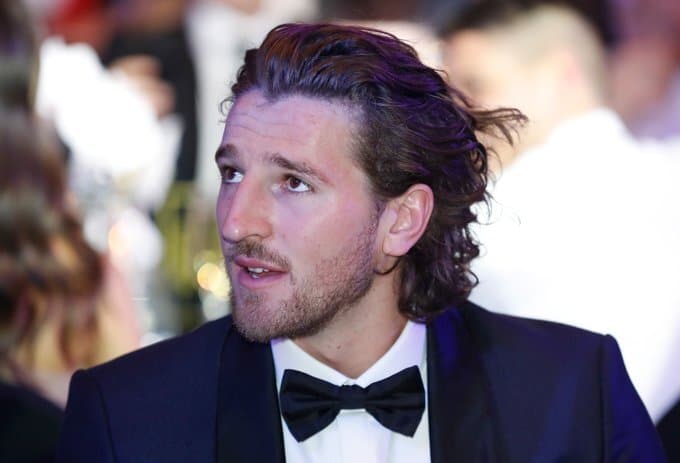 Toby Greene brought his mum. Now, if you’re trying to win over the masses, then bringing your mum to a formal event is pretty much your best shot. For some reason it’s super cute. Also, I have to say that she looks ridiculously good – classy, but also striking.

Here’s the point where we have to beg the AFL. Please, please STOP doing the silent dress display, everyone looks so awkward. Watching guys watch their partners twirl and look weird is just dreadful. Hilarious but dreadful. I mean, it’s not as if it’s just the guys who look silly. 9 times out of 10, those moments make a beautiful adult woman look like she’s at her year 9 formal (we all know that year 9 is the lost year).

Ah, Barbara is back on her kitchen theme with Jessie Murphy’s dress being likened to cling wrap. She’s a stunning woman, but honestly this just looks awful to me. Of course, I’m sitting here with a plastic flamingo poking me in the head so I’m not sure I should comment on anything.

Upon seeing Elli Brashaw (Nat Fyfe’s partner) Brigette involuntarily said “oooooh, no… so bad”, then rapidly changed her mind. She followed up by saying that Tom Mitchell’s wife was wearing a dead Fraggle.

We agreed that we were pretty down on the Dangerfield’s matchy matchy outfits, especially since they are weirdly clashing. I mean, get the same colour burgundy, it can’t be that hard.

Patrick Cripps man, he looks so goofy during that weird one-on-one dress show off. During the dip you can tell his partner doesn’t trust him.

Barbara is delighted by Kate Turner (Hepple’s partner). She’s in latex and Barbara has been waiting for someone to look like they are wearing a garbage bag – it’s the full kitchen cupboard. As someone who actually has worn a garbage bag, I personally don’t think the look is a winner.

It’s important to note here that Barbara has brought along a liquor called Fuoco Del Vulcano. It’s like drinking petrol. I can’t decide if I recommend it or not.

Brigette watches the mini Gil (Hamish, for those who are confused – HB) talk for a bit before announcing “geeze this guy is NOT a natural”. He’s really not. I feel like this isn’t the time to experiment with hosts. Get someone charming and capable. HB perhaps. He would offend everyone.

Brodie Grundy checked his watch. He’s bored or in pain or both. In fairness, we’re talking about our workplace now because we’re definitely bored and the Volcano drink has us in pain.

This kid interviewing people is such a cool little dude. Isla Roscrow is a cutie, and dobs her mum in for crushing on the Bont. I hope my kid one day gets me a hug from Nic Cage.

Thoughts about our first Brownlow:

Brigitta lets out a big exhale and removes her wig. She thought they’d get a bit rowdy – but there was just the one giggly guy at the end (Brad Hill – HB). Very safe fashion – it was a bit barbie princess very same, lots of trains.

Barbara thought Tayla Harris’ dress was a power move dress. I loved Greta Kernan’s outfit, but the team as a whole has a soft spot for Tayla. Honestly, she could wear a sack dress with high collars and fraggles and 6 trains and we’d still be on board.

There was some serious agreement that all the presenters were having a solid go but need a LOT of work. I mean, Hamish is good in tiny bursts but as soon as he has to carry something on his own he fumbles with strange pauses and an absolute lack of charisma. Daisy seems like she gets half way through a sentence and forgets where she was going with it – sadly you can’t have both a host and a interviewee being stuck for words.

I asked the team if it was a shock that Nat Fyfe won. Brigitta was shocked by his age, he’s a pup and he’s talking about being a leader – are we old?? Yes Brigitta, we are.

I asked how miserable the others would be (on a scale of one to ten), if they were forced to go to the Brownlow. Brigitta pointed out that clearly we don’t need to worry about winning which takes a lot of pressure off. Better decorations would be required and quite frankly we’d like to see a theme. Like a 90s under the sea school dance. But just like all good gatherings, everything boils down to the food.

Seriously Channel 7, SHOW US THE FOOD. Here at Casa del Mongrel, we ate smarties, cheese and eel Twisties (seriously). Brigitta was planning on making a salad, Barbara was going to make a dessert and I was doing a lasagne. We all failed a bit (yesterday was a nightmare – sorry about the website downtime, that was my fault), and HB ended up making us pasta to go with our motley selection of snacks. Dare I say that the folks at the Brownlow probably didn’t eat any better? We certainly didn’t see evidence of any quality grub.

The night ended with a slow mo of Fyfe pashing his medal. It was a little too intimate for us, and really, he should have showed some leadership and practiced beforehand.

All in all, Brownlow night is literally the most boring night imaginable. HB was thinking this could be a yearly article but in all honesty if I have to watch this nonsense again I will gradually get more and more offensive until he fires me (jk, he can never fire me, I’m his wife and also he doesn’t pay me so whatever).

Football, fashion and a f****** bored Mrs Mongrel signing off.