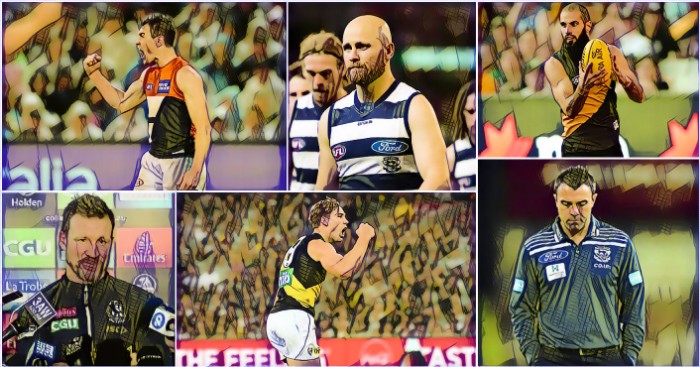 I’m really not sure what all that talk of a home final in week one was ever going to achieve. But if that wasn’t enough, this week he comes out and suggests Richmond were a better side last year. That was never going to end well. It’s clear that they are better with Tom Lynch in the team, and it seems Scott found that out the hard way. Geelong’s record in finals under Scott is glaring enough to imply that trash talking the opposition might be unwise.

2 – RICHMOND’S RECRUITMENT OF TOM LYNCH MAY BRING THEM A FLAG.

The Tigers have now become that club who have success and, despite the AFL’s endeavours to equalise the competition, will go out and land a big fish in trade period. It did look ominous when Lynch made the move, and Friday night’s best on ground effort was clearly the difference. He’s in exceptional form and will no doubt provide headaches for a very competent Giants defence. There’s a few concerns surrounding Phil Davis after playing hurt on Saturday. He’s the man one would think – if he’s fit…

3 – I’M TIRED OF ALL THE COMMENTARY SUGGESTING GARY ABLETT JR IS FINISHED.

When you play 24 games as a small forward and kick 34 goals in a season, you’ve pretty much done your job. The media speculation around Ablett is getting boring. He’s still a very good player with at least another year in him. He’ll know when his time is up, and he won’t need to be told. I even reckon he can play in the middle if he wants to. I’d like to see him back in 2020. A champion like this should go out on his own terms, and without the media pushing the narrative.

Does the Tomahawk have a problem? It seems to happen in crucial games where a reckless act results in an untimely suspension. The Cats’ dominance to half time may have been greater had Hawkins been on the field. This time of year always throws up these scenarios and it’s not the first time that Tom has been the subject. Is he unlucky or just a bit silly?

5 – BACHAR HOULI IS GETTING BETTER WITH AGE.

Bachar has arguably played his best football past the age of 30. In the 2017 premiership nobody would have been surprised if he was awarded the Norm Smith medal. It was one of his best games for the club and his form hasn’t wavered since. This humble man is one of the game’s most reliable defenders and the drive of half-back he provides sets up so many plays. He turns 32 in May and looks set to continue to be a force in 2020 and beyond. He’s also my pick for this year’s Norm Smith.

6 – NATHAN BUCKLEY MUST THINK HE IS CURSED.

Poor old Nathan. As a player he took out every honour bar a premiership medallion. As a coach he seems to be able to get the best out of his players despite a huge injury toll. Last year they jumped out to a 5-goal lead in the Grand Final only to lose the lead for the first time with under two minutes remaining. We all know how that ended. Yesterday the Pies were woefully behind and found a way back into the game. A Chris Mayne kick for goal looked home until a review showed it was touched on the line. Another late snap would have given them the lead but it found the woodwork. Even a botched review which showed the ball was clearly touched and called a goal didn’t help. Another 4-point loss. So near yet so far once again. Did Nathan run over a cow in India or something?

7 – THE GIANTS MCG HOODOO IS NO MORE.

Wins have been few and far between at the MCG for GWS. Their overall record is still well below what a team with their talent should be, but it all matters little when you win one that counts. The Giants’ aggression in this finals series has surprised us all and has upstaged the teams they’ve played. They’ll need to bring that intensity again, and if they were to do the unthinkable and win next week, there’ll be no more talk of any problems for the Giants at the G.

8 – JEREMY CAMERON IS SOMETHING SPECIAL.

OK, so no surprises here. Most of us are already aware of his prodigious talents. What he hasn’t done to date was star in a final. That all changed on Saturday. He was brilliant, and his kicking for goal was sublime. He’ll provide a headache for the game’s best defender in Dylan Grimes next week. Even Grimes will do well to contain a big man who can mark strongly and be dangerous when the ball’s on the ground. This pairing looms as the matchup of the 2019 GF, and could well be the deciding factor in the result. Let’s face it. The Giants’ midfield will provide a decent supply for Cameron, so Grimes will need to be at his best.

9 – WAS THAT LAST QUARTER AN INDICATION OF A TIRING GIANTS AND WILL IT CARRY INTO NEXT WEEK?

After leading by 33 points early in the last quarter, with six minutes still remaining, the Magpies had drawn to within a kick and the ball rarely left their end of the ground. When the Giants did take possession, their efforts were met with a wall of black and white and there were relentless re-entries into the forward 50. The Giants looked spent. So it’s going to be interesting to see what energy levels they’ll provide next week. As expected, when coming from sixth position into a Grand Final, the road is much tougher. That said, I know of at least one player who had the week off and will come out fresh. I’ll be watching him closely, until I get poked in the eye.

10 – SALES OF GIANTS’ GUERNSEYS, SCARFS AND BEANIES WILL SKYROCKET IN MELBOURNE THIS WEEK…

I have to say that the orange, white and charcoal is starting to grow on me. I may jump on this week. It’s not necessarily out of any hatred or bias against the Tigers, but more out of the underdog status and to see history in the making as the Giants take out their first flag. Or am I, like many neutral observers, going that way due to the AFL and their ridiculous handling of the Toby Greene case in what conspiracy theorists might say was a plot to get Collingwood into the GF. Either way, I’m brushing up on the lyrics: “We’re the Greater Western Sydney Giants, we’re the biggest and the best!”