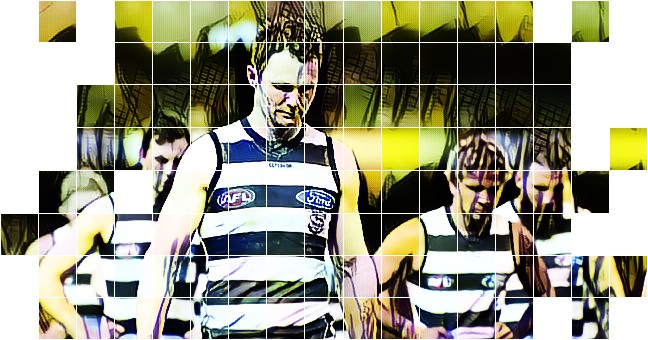 This loss was tough. Writing this is tough. It’s not easy being a Cats supporter sometimes. But nonetheless I’ll be fronting up for the now seemingly yearly ridicule from opposition fans about how Geelong are Home and Away specialists and can’t get it done when it matters. Admittedly, it hurts…

But not as much as not being there. To paraphrase Heath Ledger’s Joker, Cats fans need some perspective about our 2019 season and I’m going to give it to them.

This season has finished disappointingly. Sitting top of the ladder at 11-1 and then crushing Richmond before the bye. Everything was falling into place. I don’t quite know what happened, all I know is that in recent years Cats teams don’t seem to finish their seasons very strongly.

But lets to get to the points of conjecture.

We’ll start with the big one. A great season by the Little Master and in my biased opinion he should’ve received an AA nod. However, his finals series was very much below par, and not just when compared to his lofty standards. Our very own leader here at the Mongrel has highlighted a few contests over the last few weeks where the man has come up short. I think Ablett should retire. Retire on a fantastic season, and don’t allow himself to be exposed by teams, as father time will no-doubt keep catching up to him. The finals have showed that he is just a slight step off the best, and I for one would rather get another hungry kid in, or perhaps another experienced player (not quite so advanced) to take their opportunity.

Wound back the clock in the first half. Absolutely vintage. But I also think Taylor should not go on. He is too good not to play, and it throws our whole side out. If Taylor retires or perhaps gets traded to a W.A. side, it allows Blicavs to officially take control as the general of our backline and confirm his place as our number one key defender. It makes sense.

Great Year by the Tomahawk. I will be honest and say that the T-Bone is my favourite player at the Cats. But I watched last nights second half thinking about the times we went forward and came up short in a few line-ball aerial contests, about how much we missed Hawkins. You only have to look at the performance up the other end by Lynch to see the value that a team’s marquee forward can mean. Lynch kept the Tigers in it early, and then propelled them to victory.

You can’t fault Kelly. An absolutely fantastic season that vindicated the Cats playing hardball and keeping him despite the noise to let him walk for a lesser deal. Geelong knows exactly what it wants for Kelly and should not stray from that price. Whatever it is (hopefully two first round picks with one inside the top 10) it still is not enough. I’ll be sad to see Kelly go, but I will be thankful for what he brought to the team and his professionalism in such difficult family circumstances.

I am a Chris Scott supporter. Four Preliminary finals since 2011 says that he is kept us very competitive despite transitioning the list from the all-conquering team at the turn of the decade. The fact that he has also introduced a raft of youngsters that seem very capable of carrying on the baton once the likes of Ablett, Taylor, Selwood and Hawkins have retired speaks volumes – he not only values the now, but he is not going to leave the club in the lurch when he eventually departs. Things just haven’t fallen Geelong’s way in the last 7 years. Sure some of it is the coaches issue, but I’d rather a coach that keeps us in finals every year and still brings in burgeoning talent like Miers, Atkins, Ratugolea and Narkle. Sure, some of those players were patchy last night, but they are young and will hopefully learn from the experience to help us keep moving forward next year.

My message to Cats fans is that it’s okay to be upset and frustrated with how our year panned out. We clearly showed we were good enough, just not for long enough.

We will likely lose Ablett, Taylor and Kelly. But we will gain Jack Steven from St. Kilda for what is looking like a bargain price, as well as hopefully two first round picks, which Stephen Wells could do just about anything with. Hawkins, Selwood and Danger are still there. Another year of development into the youngsters (as well as finals experience). All is not lost.

I am seriously hurting at the moment and will allow myself some time to deal with the pain of another loss in a big final. But I do think that Richmond has shown they have been the best team over a number of years. I think that it is fitting that they get another opportunity to solidify their legacy as a fantastic team that won multiple premierships, particularly if they’re playing against the team that robbed them of that chance at glory 12 months earlier.