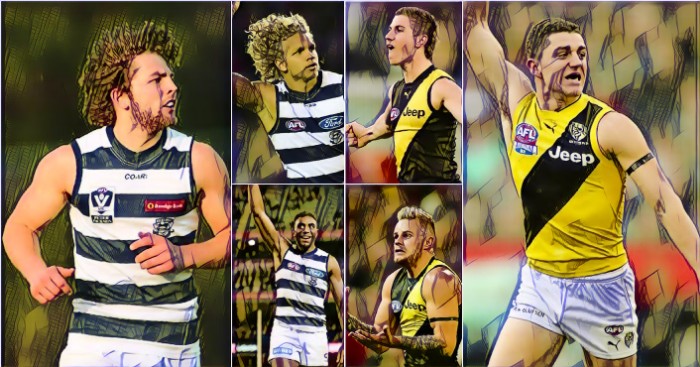 The Battle Of The Bottom Six Players

So often we hear experts talk about a club’s bottom six players, and the difference they make to a result.

“They didn’t get enough from their bottom six.”

“A team is only as good as their bottom six.”

Going into tonight’s Preliminary Final, the Mongrel – far from being an expert – wants to get on the front foot and look at those potential “bottom six” players for both Geelong and Richmond in this particular game, and how they could influence the outcome of the game.

The Cats finished top of the ladder for a reason; well, two reasons actually.

The first is that they’re a damn good team, with a great mix of superstars and unsung players. The other reason is their tight back six that allows a powerhouse midfield to get running. They have the ability to both restrict an opposition and hurt them going the other way, but there are those who can go missing.

Turned it on after breaking into the team in Round 21 this season, but with 14 touches per game and no goals in the finals to date, the pace and intensity has been a bit much for him. Might be a bit harsh, but he has probably been one of Geelong’s least effective players in their two finals games to date.

The Cats cannot afford him to be down the bottom of the column in disposals against the Tigers, as his willingness to take the game on and create could have a huge influence. If he is a bit of a deer in the headlights for the third straight game, it does not bode well for the Cats.

He was brought in to replace Rhys Stanley in the Qualifying Final this season (due to the heavy rain that never came, remember?) but repaid the faith with just one touch in the first quarter,. He was like the invisible man.

He has all the skills but has struggled to regain early season form after returning from injury. As a matter of fact, he has managed just 16 touches per game since returning. I reckon his match up with Brandon Ellis could be pivotal in this game on the wing.

This bloke is the ultimate “heat-check” kind of player. When he is on, so is his team. Need proof? That’s what I’m here for.

It may come as a shock, but this bloke is the barometer for Geelong.

In the side for his tackling pressure, Atkins has delivered for the Cats in 2019, hitting double figures in that category twice in 2019.

It’s best to get him involved early, as either his offence feeds his defence, or vice versa.

The big fella has to clunk marks, and with Tom Hawkins on the sidelines due to his own stupidity, his overhead work becomes more valuable than ever. He has taken four contested grabs twice this season, one of which was last week against the Eagles, and the Cats will need him to repeat that effort.

The worry here is that he has games where he simply cannot get near it. As a power forward, games where he’s held under ten touches might occur more often than others, but it has happened to him in 12 of his 19 games this season. The Cats have been very patient with him, but they need him to stand up here.

I thought this bloke was really going to break out in 2019, but he seems to have stalled a bit. He is sitting right at the same amount of disposals per game, failing to take the next step in his second season and has hardly hit the scoreboard at all (four goals in 19 outings).

Though he has not plumbed the depths of poor form, he has yet to bust out and have a game-breaking performance either. I reckon the Cats may need him to if they’re to upset the Tigers.

This is not meant to come across as an insult, but rather a compliment. The Tigers have a heap of bottom six players that continually perform above their station and pay grade. As part of the Richmond system, a down game from these blokes does not necessarily mean they have not had a positive impact.

You ever see a Scooby Doo cartoon where Scooby and Shaggy get scared and go to run and they take about six or seven steps and actually just run on the spot instead of getting anywhere? That’s what Brandon Ellis reminds me of – he takes a few steps to actually get going, but playing on the wing he is a valuable link man for the Tigers.

His direct match up against Sam Menegola, and which player emerges victorious in their battle could tell a big story.

Can look like a million bucks or ten cents depending on the day, but in recent weeks he has been playing the small forward role as well as anyone in the game. Has averaged five tackles per game over his last four outings to go along with his 16 touches, but has been prone to going missing at times.

His ability to work up the ground and take some courageous marks inside 50 means that he cannot be ignored, and when the focus goes onto the big boys in the Tigers’ forward line, he tends to bob up and give his defender a costly reminder to tighten up.

This bloke would be a happy little Tiger, having been moved to a more defensive role this season, and holding his place in a really strong team. Is happy to mix it up in one-on-one contests and win his own footy, or get to the outside and get the Tiger machine running.

After kicking goals in all seven games to start the year, Baker was switched back and took time to adjust, but like most on this Richmond team, he is a tenacious bugger and does not shirk the issue.

Pressure is where Graham has excelled, and as a defensive mid who can drift forward and hurt on the scoreboard, he bobs up at the most opportune or inopportune moments depending on your affiliation. He has had 20+ touches on just four occasions in 2019 but has the capacity to change the game with his tackling.

He had 14 tackles against Carlton in Round 21 and added four goals as well.

In the side for dual purposes, Bolton can apply defensive pressure and has the creativity with the ball in hand to do some damage. Unleashed into a midfield role from Round 16-19, he showed plenty, with the Tigers winning those three games where he had 20+ touches.

He isn’t a huge goal scorer when he slots back into the forward set up, with under a goal per game from his 17 games this season. He has kicked multiple goals just twice and has been held goalless seven times.

That potent boot of his can tear a team apart of half back, and earlier in the season I was astounded at how teams would allow him to drift forward, receive a handball from a player who was just a few metres outside his range and have a ping at goals.

Loves the outside ball and with some defensive attention, can be rendered a little ineffective as he does not win a lot of his own footy. If he gets 20+ disposals, the Tigers win this season – that’s it in a nutshell. They’re 6-0 in games where Short gets plenty of it. The Cats need to stifle his run.

It pains me to say this, but the potential bottom six for Richmond are just far more reliable than those of the Cats. I trust them more at this stage. I trust Short’s penetrating kicks. I trust Jack Graham’s consistent pressure, and I trust Brandon Ellis to get 20+ touches on the wing and not go missing.

I don’t trust the Cats I listed as much.

The Tigers can afford to have all the players listed do their job at a pretty low level and still be effective within their game plan, but without Ratugolea marking, Atkins tackling and Dahlhaus picking up touches, the Cats strike me as a team that leaves too much to too few.

Luckily, those few they leave it to have the potential to be outstanding.

It’s the Cats and Tigers in a do-or-die Prelim at the ‘G, and the bottom six in this one will be just as important as the top six. Maybe we can revisit the performances of these 12 players once all is said and done.

But only if what I’ve written is proven right, okay?

Cheers all – become a patron and help us out at The Mongrel. Would be greatly appreciated.

Help support The Mongrel become the site you want it to be and become a patron. Click the image below to support us.

Or you could buy a Bumper sticker or stubby holder and spread the Mongrel.