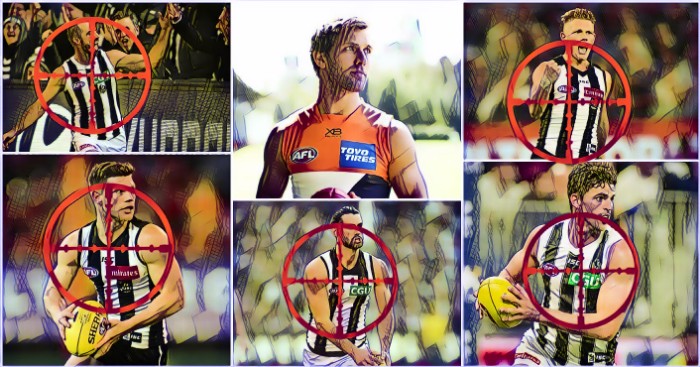 Who Gets De Boer-ed in the Preliminary Final?

There has been a lot written over the last week or two about Toby Greene and the impact his probable/possible absence will have on the ability of GWS to score a Preliminary Final win and move into their first ever Grand Final.

On the road, against a powerful Collingwood team, and now without Lachie Whitfield who was taken to hospital with appendicitis this week, the Giants have their backs against the wall. It is the sort of game that can see a team galvanised, or torn apart before the game even starts.

I worry about the effect the Toby Greene situation will have on the team and the man himself should his appeal be successful – after such a stressful week, I wonder how much it has taken out of the team, emotionally. I watched with interest as the West Coast Eagles ran out to play Geelong last week. With one of their players embroiled in an ASADA-led mess, the Eagles looked flat as they ran out. Some may call it business-like, or focused, but it is always interesting to hear the opinions of someone not invested whilst watching.

Mrs Mongrel happened to look up from whatever she was doing as the Eagles made their way onto the ground.

“They’re going to lose,” she stated with confidence. “Look at their body language.”

I raised my eyebrows and had a bit of a smile as she channelled her inner Lisa Simpson, but as the first quarter got underway, they were indeed flat. I started wondering whether the events of the preceding week had had an impact on them, even just slightly? I’d once heard Dermott Brereton talk about teams being just one or two percent off and how it impacted their performance, and it seemed to ring true here. It took the Eagles a while to find their feet, but the start they’d given Geelong, and the effort to get themselves back into the game was too much.

Could the tumultuous week this week have the same impact on the Giants, or will it galvanise the team?

But amid the turmoil and excitement of Preliminary Final week, one storyline continues to fly under the radar – the influence of Matt de Boer on Greater Western Sydney.

Don’t believe me? He missed seven games in 2019, and the Giants’ record in those games was 3-4. Two of the three wins in that period were by under a kick as the GWS team struggled to contain opposition midfields. The team’s record with de Boer in the side is 12-5.

Prior to be dumped on his shoulder by a frustrated Ben Cunnington, there was a bit of a push amongst my fellow Mongrels for de Boer to be included in our Rolling All-Australian Team. His injury alleviated the pressure of having to make that tough call.

So, with one and possibly two important pieces to the GWS puzzle on the sidelines heading into this contest, how the team uses the third will be vital to their plans to pull off the upset at the MCG.

Let’s take a look at the possible candidates for his attention.

The issue here is whether de Boer can run with Treloar all day. The former Giant is a running machine, and whilst de Boer is a beast at preventing players from getting touches at the coal face, in the open spaces, the gut running and second and third sprints of Treloar  could prove to be a tag-breaker.

There’s been a bit of a perception that Treloar isn’t as damaging as others with the ball in hand, but that way of thinking may be a little outdated. When people cite that, they’re usually doing so with the 2015/16 version of Treloar in their minds. He is more measured now – more patient with the ability to pause, assess and hit targets. Taking him out of the game would be an enormous task, and as good as de Boer is, I think Treloar could open him up later in the game.

Is there a more damaging player with the ball in hand in the competition? Pendles is all class when he is allowed time and space. That little handball feign, the changes of direction, the ability to wait until an option presents and deliver, rather than bombing it forward and hoping – Pendlebury provides an element of supreme class that many midfields simply do not possess. To take that from the Collingwood midfield would be robbing them of expert delivery inside 50 (Pendles is at career-high numbers this season in that category).

Having Pendlebury running free is not an option for the Giants, and should de Boer’s attention land elsewhere, it will still be prudent for them to have a relatively tight rein on the Collingwood champion. I’d pull Tim Taranto aside and see if he could shut Pendles down at  stoppages (great tackler and strong in spite of his tender age) and try to hurt him going the other way.

In this world there are known knows, and known unknowns… or something like that. I really don’t know much, to be honest.

But the fact that Steele Sidebottom can be impacted heavily by close checking is definitely a known known.

Sidebottom is the reigning Gary Ayres medallist – a proven finals performer, but he has been susceptible to the tag in the past. Mark Hutchings had enormous success in 2018 against Sidebottom, limiting him to 18 and 14 disposals in the two games he went to him last season – one of which was the Grand Final.

Hutchings was at his best last year, and de Boer is currently travelling at close to his best right now. Sidebottom looks like the perfect match up for him and Collingwood will be expecting it.

Want to stop the machine from running smoothly? Mess with the engine.

Taylor Adams is the workhorse of the Collingwood midfield. He does the difficult stuff, the in-and-under work to get the Pies off and running. Hampered by injury early in the season, his last six outings have returned a healthy 26.5 touches, 6.33 tackles and 6.16 clearances per game. In the Collingwood midfield he is often overlooked, but the Giants would be wise to consider his influence.

GWS has the inside bulls to control stoppages, assuming Shane Mumford can even remotely begin to break even with Brodie Grundy. Could de Boer put the clamps on Adams and cause the Pies’ supply out of the middle to dry up a little?

Here’s the left field option. Yes, I know there is no way de Boer can go with Grundy in the air, and we’d be foolish to think that we will see de Boer in the ruck at any stage, but how about a classic tag team between de Boer and Mumford?

Let’s be honest – Grundy is going to kill Mummy around the ground. What happened last time they matched up?

Oh, Grundy had the lazy 48 hit outs… and 31 disposals… and nine tackles… and 11 clearances.

There is no way the big fella can go with him, but how about if Mummy contests the tap and de Boer picks up the slack as soon as the ball comes to ground?

Is this suggestion nuts? Maybe, but I reckon there is a method to the madness.

Grundy is ultra-important to the success of the Pies. His ability to take the clearance, drive the Pies forward and follow up by being at the next contest is as good as I’ve seen from a ruckman… but he has never had someone nipping at his heels and making life difficult for him. All he’s ever had to do is beat another ruck around the ground. Beating de Boer is a different prospect all together.

This is one of those moves that could backfire spectacularly. Or it could be one that everyone lauds after the fact. Grundy is easily the best clearance ruck in the business, averaging 5.9 per game in 2019. Imagine if every time he gets both hands on the footy, the annoying, clamp-like arms of Matt de Boer are wrapping around him? It’s an interesting proposition, and one that has not been explored at all in 2019.

GWS have their backs against the wall in this game. If Toby Greene’s appeal is dismissed they will be without, arguably, their best three players in their biggest game of the year. Do they go with the tried and true option of sending Matt de Boer to Steele Sidebottom, or do they opt for something a little more outside the square? Is it Pendles’ turn to deal with the tag? Adams? Grundy?!?!

Leon Cameron will no doubt have done his homework. His best stopper will need to make a big statement in this game if the Giants are any chance.

Send him to Grundy.