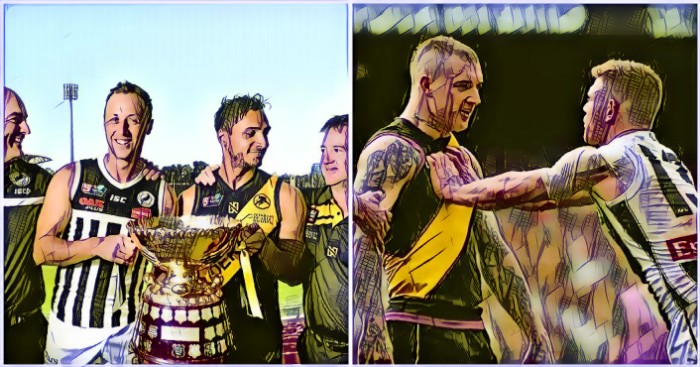 The football calendar has rolled into its second most important week with the very real prospect of a monster Tigers-Magpies Grand Final shaping as the most likely outcome, barring an all too common preliminary final upset. Footy fans across the country are already drooling at the potential match-up which would duly cause Melbourne to explode with anticipation.

A Richmond-Collingwood finale would evoke many a memory of the 1980 VFL Grand Final in which the Tigers prevailed to claim a famous premiership in front of a crowd of 113,461 at the MCG. The game remains the most attended match of Australian Football of the last forty years.

It was only two years ago, that 1980 was no longer the passcode for Richmond fans all around the land. A glorious week in 2017, which began with a Kevin Bartlett-led jumper war, meant a 37-year drought was finally ended. As the Tigers held the cup aloft again, we forgot why the jumper they were wearing mattered to begin with. History means everything until it is broken.

Yet, 1980 still ranks as the high-mark of Richmond history. The always close-by footage of KB arms in the air as he runs to celebrate one of his seven Grand Final goals epitomises the Tigers’ finest hour. Whereas, it’s the lowest ebb for the Magpies who were still very much the Colliwobbles, as a seventh Grand Final loss mounted since 1958.

On a much smaller scale, Adelaide and the old SANFL will be treated to their own Tigers-Magpies Grand Final on Sunday to kick-off ‘Grand Final week.’ Port Adelaide will take on its most bitter foe, Glenelg in this year’s SANFL GF, in a rivalry that foreshadowed the modern-day Showdown against the Crows. The game is expected to draw a crowd in excess of 40,000 at the Adelaide Oval.

Such is the nature of a sport that is draped in tradition and heritage, historical lines too will be drawn in Adelaide. They will begin in the pre-season of 1981, when the Tigers, of Richmond, took on Port Adelaide in the aftermath of a glorious premiership. Richmond had smashed Collingwood by 81-points months earlier in 1980, a record in a Grand Final (that is currently held by 2007’s Geelong against the modern-day Port Adelaide), before arriving at Alberton Oval to play in a pre-season game. The Port Adelaide Magpies had won three of the past four SANFL titles and would go on to claim their third in a row in 1981 (against Glenelg of course), under coach John Cahill, who would be coaching Collingwood two years later.

The game, naturally, was an epic, and thankfully survives in highlights on YouTube. Richmond defeated Port Adelaide by one solitary point, and while the game was merely a trial match, it had considerable ramifications for the future of the modern-day national competition. It would be transformed into a reference point for ambitions Port Adelaide administrators to track the decline of the SANFL, and rise of the superpower of the VFL over the next decade. As in 1990, Port Adelaide in the middle of another hattrick of premierships were far less competitive against a VFL counterpart. Instead of going down by one point they were belted by losing VFL Grand Finalists Geelong at Football Park. A few months later, Port Adelaide launched its AFL bid.

Like the 1980 VFL Grand Final, the 1990 SANFL Grand Final between the Tigers and Magpies, was one for the ages – and the history books. Both games would grow in stature as the years followed.

1980 gained greater significance as Richmond’s drought, and years of humiliation, dragged on and on and on. Whereas, from a Collingwood perspective it made 1990 – the first Grand Final under the AFL banner – all the sweeter for a club that had experienced more hardship than any other in Grand Finals.

Meanwhile, across the border in 1990, Port Adelaide and Glenelg’s biggest battle was in the Supreme Court and unlike the Grand Final, Port lost. The Magpies’ bid for an AFL licence was foiled by insurmountable legal action led by Glenelg and supported by the SANFL. Port’s bid was doomed when it lost sister club Collingwood’s all-important support, and vote, over the delicate matter of the black and white stripes. Thirty years on, not much has changed. Thus, the Adelaide Crows were born.

The Adelaide Crows began its life at the end of 1990 as Tigers in new stripes. The inaugural playing squad and staff were largely from Glenelg origins, including coach Graham Cornes and captain Chris McDermott. It was only weeks earlier that Graham Cornes declared the “good times were well and truly gone” in Port Adelaide’s winning rooms post-game after one of the most political games ever played.

Ironically, now it is a Port Adelaide-Glenelg Grand Final that is saving the SA football public from Graham Cornes’ second sporting Armageddon, an all-AFL themed SANFL Grand Final between Port and the Crows.

But back to the past.

The 1990 SANFL Grand Final was also noteworthy for unearthing a young future Brownlow Medalist Gavin Wanganeen, who kicked two crucial goals. Two years later, in 1992, Port Adelaide met Glenelg again in the Grand Final and a young superstar in Nathan Buckley was best-on ground for the Magpies. It remains the Collingwood legend’s only senior premiership as a player or senior coach… but for how long?

1990 was the end of a glorious era for SA football, and everyone was largely pissed off about it. Their anger was rightly or wrongly directed at the Magpies, who was not exactly everyone’s favourite to begin with. For those who are not too familiar with the history of football in South Australia, Port Adelaide was the Collingwood of the SANFL. You loved them or you hated them.

With the VFL becoming the AFL, the SANFL alongside the WAFL were reduced to football’s second tier, Port Adelaide was the only pre-existing club that was able to rise to the AFL. However, it came at a cost it had to shed its Magpie identity and was spilt into two separate entities causing a major identity crisis in which the club has only just really recovered from.

In 2020, Port Adelaide will have a combined logo with the Power and Magpies to celebrate 150 years. The new logo will be the first time Port Adelaide will be presented as one brand since entering the AFL, yet this logo, which has already been designed, does not include a Magpie or the prison bars. Whether this logo will be used beyond 2020 is unknown. Therefore, Sunday’s Grand Final could be the last game that a Magpie is on a Port Adelaide jumper. Like 1990, 2019 may well be the end of an era too.

The game could also be the first time that a premiership cup, of any description, returns to Alberton since it has been home to both the Power and the Magpies since their off-field reunification in 2010.

Football’s many ghosts of history will be at the Adelaide Oval watching on Sunday.

But since the national competition’s official badging in 1990, the unquestioned main event has – quiet rightly – be held at the home of football in Melbourne. And the MCG is set to be at its nostalgic best on Grand Final day after Paul Kelly’s rendition of Leaps and Bounds.

So, will 2019 throw up the blockbuster scenario of Richmond vs Collingwood as a succinct form of historical intertwinement?

Could it be Geelong vs Collingwood, another great rivalry that has extended from on-field Grand Final history to the wardrobe department of the present?

Or could the Greater Western Sydney Giants, the club with the least history of all, overcome all the seemingly never-ending hurdles and make the big dance? Wouldn’t that be historic?

Whoever it is at the MCG on the last Saturday in September for 2019; let us hope that it is felt beyond the final siren and into the decades.