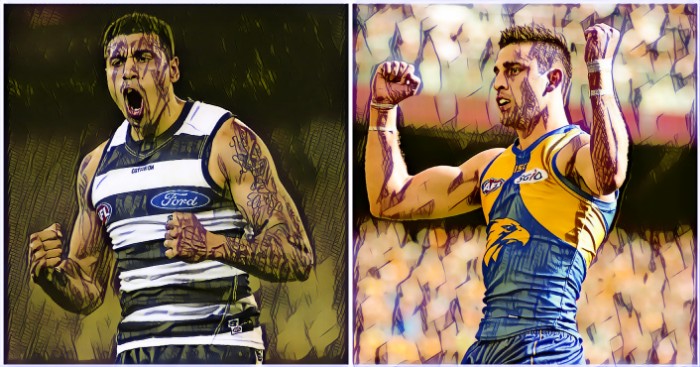 The Geelong Football Club advanced to the Preliminary Final with a big win over the West Coast Eagles.

Casting a careful eye over proceedings, we’ve applied ratings out of ten to every player who took part. Here’s how they landed

Dramatically reduced the impact of Naitanui on the contest (along with a well organised centre square effort), which seemed to suck the life out of a subdued West Coast midfield.

21 kicks among 27 disposals at over 80%, provided typical drive and composure from the back half.

Lively if unobtrusive small forwards match, didn’t allow Nelson or Sheppard the space they like to operate in and a disposal efficiency of over 80% contributed to the difference between the teams forward of centre.

Vast improvement on last week, in particular his hands looked much cleaner, but still appearing apprehensive to get involved despite 5 tackles – many of them as second or 3rd man in.

A wily veteran’s game, he’s been a star for a very long time but playing on borrowed time for much of 2019. Some clever body positioning and taps to teammates to clear danger prove his value still.

Has looked overawed this finals series, particularly in one-on-one contests. Didn’t stop trying though and contributed two score involvements from deep in defence.

Got off the leash for two important goals in the first half, among nine score involvements. Was a solid contributor to the team effort rather than a star individual.

Cometh the hour, cometh the man. With blood oozing from a nick above his eye for most of the game, Selwood wound back the clock and was at his combative best compiling 26 disposals at a cool 85% efficiency along with a big captains goal from an intercept mark in the third quarter to halt an Eagles run.

The clear standout Fijian on the ground on Friday night, big Esava was a brilliant foil for Hawkins with three goals straight and four powerful contested marks as the dominant aerial presence on the field.

Didn’t hit the scoreboard but was clean with the ball and part of a strong brigade of smalls that didn’t allow the Eagles defenders to dictate terms.

No doubt his and his fellow mid-sized defenders’ task was made easier by Rioli’s absence but stuck to his task resolutely and even snuck forward unmarked for the match sealing goal.

The powerhouse forward muscled his way to four goals in a welcome return to form, however his aggression in the contest spilled over as it often has across the course of his career and he’ll only be able to contribute next week by cheering from the stands as a result.

One of the few Cats to burn the ball on the night, with only half of his 18 disposals finding the intended target. If Duncan comes up will surely be in the gun.

A team-high eight tackles highlighted his game along with an opportunist goal to get his team of to a flyer. His tenacity was a strong feature of Geelong’s attitude on Friday night.

A welcome return to the line up after missing the Qualifying Final through injury, Guthrie led all comers with 33 disposals at an exceptional 81% efficiency. The 316m gained showing he did his best work in close.

Didn’t use the ball as well as he usually does and missing the spark his run often creates. Two behinds could have significantly changed his influence on the final result.

Matched up against Elliot Yeo for most of the game and was down on his expected possession count, but more than made up for this with impact. 14 of 18 disposals were contested, along with four of five marks in another example that he can influence games in multiple ways.

The young Cat defender was a tower of strength in the back half combining with his teammates to shut down the Eagles regular avenues to score. An impressive ten 1%ers was 4 more than anyone else on the ground and his four R50s and six I50s showed his willingness to work up and down the field.

Despite 15 disposals and the final goal of the match, Dahlhaus’ production was well down from where he established himself in the front half of the season. Concerningly only contributed one tackle and a single 1%er.

Didn’t use the ball particularly well but provided some great support to his fellow backmen with five tackles and unrewarded running.

Just behind Selwood as the most influential Cat on the field, Stewart continued in the rich vein of form that secured a second AA blazer. 24 disposals at a team leading 512m gained, coupled with five strong marks and eight intercept possessions he was a key reason the reigning premiers are no longer vying for the flag.

His versatility may hurt him from the perspective that Chris Scott will often play him out of position to manage a weakness rather than utilising his strengths. A team-low 97m gained on 14 disposals is evidence that this approach may not best suit the team.

As is generally the case nine possessions by Ryan seem like more, but there were no heroics like in the past few months. Six score involvements were tempered with three clangers.

Was neat with the ball and took a couple of good marks but the Geelong defence didn’t allow him the freedom of the previous week to get the ball in dangerous positions.

You could sense the desperation in his play trying to atone for last year, his back-to-back goals taking the Eagles into the lead after a fast start by the Cats. A team high 30 disposals and 543 metres gained took him above 10,000 for the season.

Last year’s premiership hero was well down on his excellent season average of 26 with just seventeen possessions. Like most of his teammates unable to get their hands to the ball in contested situations.

Less assured than we usually expect from the Eagles star with six clangers amongst his fourteen touches. Didn’t lower his colours but less influential than usual possibly due to the unrelenting pressure of the Cats smalls.

A typically brutal performance from one of the AFLs best, Yeo continued to will his team forward with 25 disposals until the result was beyond doubt. An enthralling match up with Dangerfield, Yeo more prolific but wasteful, while Danger excelled in the air probably ended in a split points decision.

The Eagle veteran bowed out of AFL football on a disappointing night for his club. An important goal to bring the margin back to under 10 points his only meaningful contribution.

2018s Gary Ayres Medal runner up was back to his September best last week but failed to replicate that on Friday. A monster 14 contested of a total of 18 possessions along with five tackles had him in his side’s best, but he was shaded on the night by Selwood and Kelly.

The matchwinner from last Thursday was unable to scale those heights again as Stanley’s strategy of jumping early nullified Nik Nat’s biggest weapon of steam rolling his opponents. His numbers were still solid however and a big year beckons in 2020.

Another September specialist who was slightly off the pace in this match. 26 disposals in just 77% game time, was integral to their first half fightback with some precision passing through the midfield to open up the play and allow the Eagles access to goal.

After what should have been a 7-goal haul last week was basically unsighted with just nine touches in this one, a disappointing end to a very good season.

A good foil for Naitanui and led the ruck division for much of the year. Kicked a goal from a 50m penalty courtesy of some Menegola petulance but couldn’t impose himself as Stanley matched his running capacity.

A poor finale after his stunning efforts last week, completely blanketed by a disciplined Cats defence. Got his hands to the ball numerous times but couldn’t bring it down, would be some doubt as to whether he continues next year, has been a great.

Unable to control the game in the manner in which he’s accustomed, predominantly due to the care taken by the Geelong mids and forwards to bring the ball inside their forward 50 resulting in only one intercept mark for the Eagles big man, his second worst return in 2019.

In the unenviable position of trying to replace livewire Willie Rioli at the last minute and unable to break the shackles of the tight checking Cats defence. An excellent goal on the run in the second hints at what Eagles fans can expect to see more of next year.

A hard game to assess, Jetta had plenty of the ball with 20 disposals but his 65% disposal efficiency compared unfavourably with the 85% he recorded in the Elimination Final when he was probably the most influential payer on the ground.

23 disposals at the extraordinary 96% efficiency, 14 marks and five score involvements are the output of a player at the absolute height of their powers. Remarkable that he’s seemingly getting better after 269 games and 14 seasons.

Darling was a threat with three goals and four contested marks but never looked to have the consistency that could force a reshuffle of the Cats defence and bring the smaller Eagles into the game more.

Was soundly beaten by Hawkins and Ratugolea and to add injury to insult was felled behind play in a completely unprovoked attack by Hawkins that will rightly see him miss a Preliminary Final.

Never able to recover his best form and importantly fitness after a late season hamstring strain, Hutchings looked a shell of the player he was in the 2018 finals series.

Another Eagle who struggled to recapture his best after injury, Barrass was monstered by Hawkins at times and finished with just four touches, of which three were clangers.

There we go. Agree or disagree? Too high, or too low? Let us know.