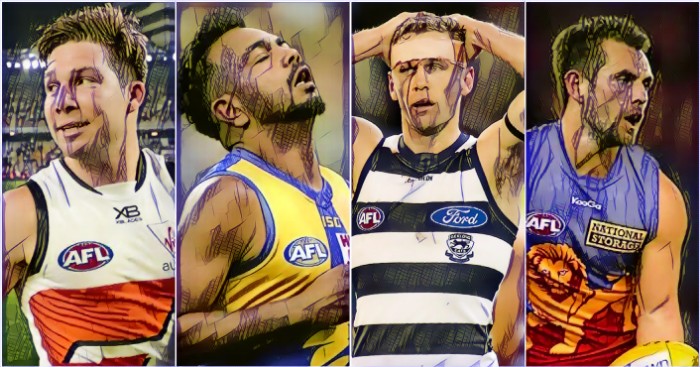 Ten Things I Learnt After Week Two Of The Finals

1 – WILLIE RIOLI IS NOT THE BEST DECISION-MAKER.

There were no performance enhancing drugs detected in Willie’s sample, unless you consider Red Bull a stimulant. The only conclusion one can make is that he was trying to mask the presence of something else. I mean, seriously, to think contaminating a urine sample with an energy drink would end well, you’d simply have to be on drugs. I hope we haven’t seen the last of this kid, but there’s dumb, and there’s du-u umb!!!

2 – THE BLOOD-RULE DOESN’T MATTER IN THE FINALS.

It would’ve been a brave umpire to ask Joel Selwood to leave the ground with blood streaming down his face with just a few minutes remaining. In actual fact, if you were watching closely, there was never a stage in the game where he wasn’t bleeding. So it does make one think that the rule becomes a little blurry come finals time. In all honesty, do we really need it? When was the last time a sportsperson contracted an illness coming in contact with blood in this way?

3 – TOM HAWKINS NEEDS TO LEARN TO SWING HIS ARM LOWER.

Another moment of madness and the star Cat sits out next week. Everybody knows that Tom wasn’t trying to knock Schofield out. We all know that a poorly laid tackle with no intentional malice results in suspensions. The AFL has never factored in the nature of sport and the rugged competitiveness of young men when deciding what constitutes a reportable offence. And this is what we get. A player is trying to shrug off an opponent while jostling for position and accidentally makes contact to the head with arms flailing everywhere, and he misses the most important game of the year. Something isn’t right, and most of us have been brainwashed into thinking it’s the right thing. The head may be sacrosanct, but accidents happen. Is there anyone out there that thinks Tom Hawkins meant this? I doubt it. But the consensus is that it’s bad luck. It is bad luck. For all of us!

4 – THE EAGLES WILL BE RUING THAT COSTLY LOSS IN ROUND 23.

I think it’s fair to say that the damage to the Eagles’ premiership defence was done in that shock loss at home to the Hawks. One gets the impression that they thought a win that day was a mere formality, but Clarkson’s men had other ideas, and played like a team that had a slim hope of making the finals. It was a shame the Hawks were unsuccessful as it’s clear they would’ve given a better account of themselves than the Dogs or Bombers. As for the Eagles, they’ll be in contention next year, especially if they can land Tim Kelly. 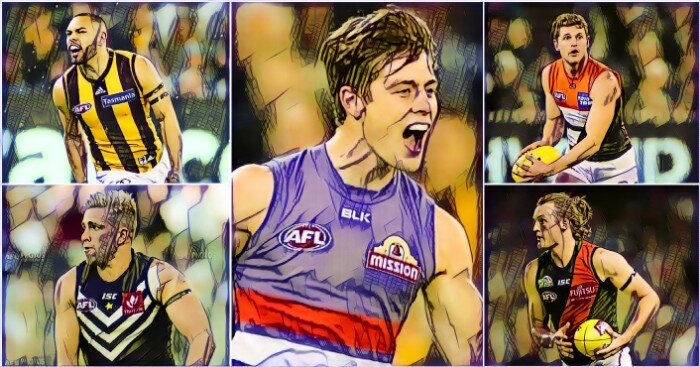 12 players who had breakout seasons in 2019 – Patron article

5 – A GREAT LAST QUARTER MAY HAVE SAVED CHRIS SCOTT’S JOB.

I believe the Geelong resurgence actually began before three quarter time. You could see the momentum shifting even though they didn’t do much damage on the scoreboard. I felt the Eagles withstood the onslaught and would come out after the break and wrestle back control. It wasn’t to be. What did Chris Scott say during the three quarter time break? Was it something along the lines of “please save my job”? Whatever the case, the Cats were magnificent. They out-muscled a very strong outfit, but one could also be forgiven for wondering if this Willie Rioli scandal had any impact on the final result. They certainly took a while to get into the game.

Chris Scott take note. The Lions played both their games at a ground that’s proven a fortress for the most part in 2019, and stumbled on both occasions. The Giants were just too fierce when it counted, and their run and aggression was what got them over the line. Brisbane were definitely up for the challenge and it could’ve gone either way, but, for now anyway, I believe the right side won the match.

It looks as though he’s done it again! A $7500 fine and a week of scrutiny meant nothing. Clearly this bloke loses his mind once the game starts. This week’s recipient of the Greene facial is Lachie Neale. I’m not sure if there’s anything in this one, but what are they going to do about it? Will the one week penalty stand? Will it be downgraded to a fine? Or turfed out completely? For what it’s worth, how good is Toby Greene right? Another star effort and a key to their win. Toby Greene is the spiritual leader of the Giants. That much is clear. And a thriving career in beauty therapy awaits when he’s done. Or perhaps in cosmetic surgery?

When the Giants were being put together, they clearly had an eye for talent when they targeted a very young Phil Davis from the Adelaide Crows. He’d played a handful of games, and yet those in the know saw in him a player you could build a team around. And they were right. He is as reliable a defender as the likes of McGovern and Grimes, especially when the ball is in the air. He always seems to be in the right spot and last night was no exception, particularly late in the game when Brisbane kept bringing it inside 50. It’s almost certain that without his cool head and strong hands in the last quarter, those entries would’ve resulted in the Lions running away with it. Take a bow Phil. Some of us in AFL land have noticed you.

Whilst Nick Robertson did a cracking job on Whitfield as Mitch’s replacement, it was clear how big of an out it was, particularly in the early stages of the first quarter when the Giants piled on the first four goals of the match, I could also see Mitch not putting up with Adam Kennedy’s attention on Cameron’s arm and Toby Greene would’ve thought twice before trying to poke out Mitch’s eyes! He was sadly missed and has become one of the most important figures in the Lions set-up. Another classic delisting by Carlton right there!

10 – LUKE HODGE’S CAREER WAS GREAT FROM BEGINNING TO END.

What can I say about Luke Hodge that hasn’t already been said. An exceptional career, and having met the man, a quality bloke as well. His efforts last night suggests he could go on, but I imagine there are bigger plans for his future, and whatever he turns his had to, it will be successful. Getting him to the Lions to extend his career proved a masterstroke and is a big part of the reason why the Lions became a force in 2019. He will no longer be out on the field. The question now is who, in the Brisbane side, will take up that leadership role in defence? Perhaps Harris Andrews, although it’s hard to see how any of them can fill those shoes. Surely, though, they’ve learnt enough and can use the knowledge gained moving forward, although I wouldn’t be shocked if there was a slight backward step in 2020 without the great man.