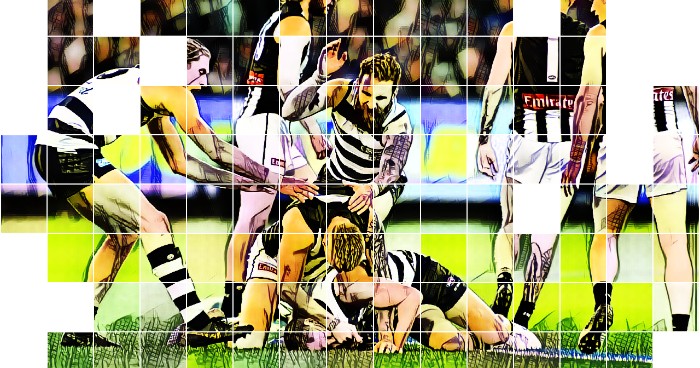 The embarrassing jumper clash in the First Qualifying Final between Geelong and Collingwood further emphases the AFL’s biggest systematic problem – that was the only the thing that was clear on Friday night.

Geelong’s dark navy-blue horizontal stripes continuously blurring with Collingwood’s vertical black and white was irritating for fans, commentators and even players, yet Friday night’s stuff-up caused a greater blur for the AFL; who is actually running the show?

Cats looked like Magpies under the MCG lights. Not only were fans at home squinting at their TVs looking for the team, they were also searching for some AFL leadership.

Once again, they were left disappointed.

And then it exploded after the game when victorious Collingwood President Eddie McGuire lashed out over a supposed breech in a “gentlemen’s agreement” that saw Geelong play in white shorts against Collingwood. McGuire’s comments about a long-standing agreement with former Geelong President Frank Costa, prompted many an eyeroll, especially from current-day Geelong boss Colin Carter on radio the following day. Carter, a long-time sparring partner of Eddie’s, was once dubbed a “Hall of Fame hypocrite” by McGuire, and would understandably be less inclined to partake in one of his “gentlemen’s agreements” than Costa, with whom Eddie got on well.

For that “gentlemen’s agreement” comment, in particular, Eddie caught criticism from those frustrated with the perception that McGuire believes he runs the league. This is further fed by his description of going off to approach AFL CEO Gillon McLachlan about the subject when he saw Geelong running out in blue shorts. However, often it is due to complete AFL incompetence that a frustrated McGuire steps up and seemingly plays a role in AFL decision-making. If he doesn’t, who will?

While, this is not necessary a healthy way for a league to be governed, the AFL’s complete mismanagement (or lack of management) means McGuire interference is routinely a good result for football fans on most issues – certainly for Collingwood fans.

As McGuire told Roaming Brian post-game, “It’s common sense! Because what did it do for tonight, for a change of a pair of shorts, everyone is happy and no one cares!”

And it’s hard to argue, because he is spot on.

There has never been an issue in regards to a clash for the last twelve years (not the twenty that McGuire estimated) that Geelong have worn white shorts against a black-shorted Collingwood.

The last time Geelong worn blue shorts against Collingwood (as they did on Friday night) was Round 15, 2007. After the match then AFL CEO Andrew Demetriou said;

“I was here sitting outside the Olympic Room with my wife and we both found it difficult to distinguish between the teams.

“There is a solution to the Geelong-Collingwood problem, and … it would be a nice headache to have if Geelong and Collingwood made it (into a final), for Victorian supporters.”

From then on it was Collingwood in its black with white stripes jumper and black shorts against Geelong its in white with blue stripes guernesy in white shorts, regardless of who the home team was. And McGuire was right, no one did care. Even in the case of big finals between the two clubs including the 2007 and 2009 preliminary finals when Geelong were the higher ranked team. And in the 2011 Grand Final fans complained about their ears – not their eyes – courtesy of one of Meatloaf’s less well received performances.

Although some Geelong supporters have been up and arms about their ‘right’ to wear their home uniform after earning the ‘right’ to play a home final. These fans of course were silent on the issue during the minor round when Geelong played a home game in white shorts against Carlton as recently as Round 23.

Geelong’s home uniform is in fact the problem, and it needs to be changed. This is because their home jumper’s base colour is white, yet their shorts are dark blue. They need to be brought into line with every other club in the competition and have either a ‘light’ or ‘dark’ uniform that is consistent across its guernsey and shorts. If Geelong want to keep their traditional home strip then they need to adopt white shorts as their permanent shorts for home games despite it traditionally being associated with the away team. Surely, it’s not that big and imposition?

Whether it was Geelong or the AFL who requested the sudden costume change the blame lies at the feet of the league. Surely, they had to tick it off at some level. With the AFL’s most important ever broadcast negotiations approaching, does anyone really think companies such as Facebook, Google and Amazon would care about these ridiculous and all too common jumper wars? No, they just want to make sure people can actually watch the game properly.

They could not do that on Friday night. Indeed, even players such as Geelong’s Tom Stewart complained that times during the game he realised – “hang on, that’s the wrong bloke!”

If the AFL continues to bungle decisions like what shorts teams should wear so the teams can actually be differentiated, what happens when they face more complicated decisions?