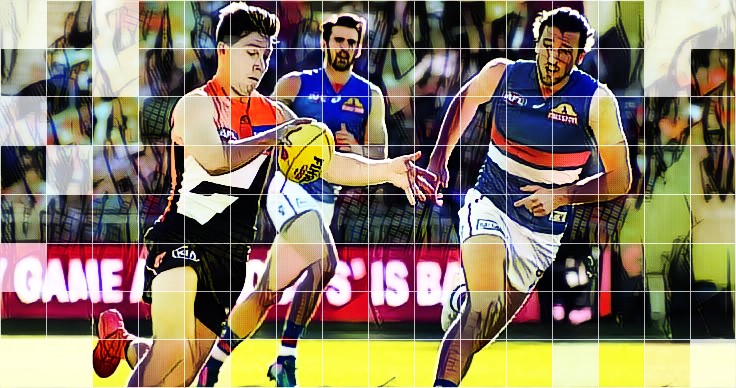 There were little battles everywhere on Saturday at Giants Stadium as GWS put a recent belting at the hands of the in-form Western Bulldogs behind them and delivered a physical beat down of their own, running out winners over their nemeses by 58 points.

This was the same Giants team that capitulated so meekly to Hawthorn, albeit in very trying conditions, and then conceded 12 straight goals to the Bulldogs to fall by 61 points in consecutive weeks before rallying against the certain-four-points known as Gold Coast to end the home and away season.

Going into the cut-throat final against the highly-fancied Dogs, GWS were at a point where someone at the club had to stand up and make a statement.

It turns out several of them did, hitting the Dogs with everything they had in the Elimination Final, to not only move onto a date with the Brisbane Lions, but set tongues wagging in the process.

As is the case so often, many of the tongues were wagging for the wrong reasons, particularly if you’re a Giants supporter.

The first player to come under fire was Harry Himmelberg, who looked to give Marcus Bontempelli a bit of a rib tickler on the boundary in the first quarter. The second was Matt de Boer, whose close checking and willingness to sacrifice his own game to ensure Bontempelli couldn’t impose his will raised the ire of Doggies supporters all over the country… including those stuck in an airport due to the weather. As if they weren’t pissed off enough as it was.

But the straw that broke the Bulldogs’ back was seemingly the actions of Toby Greene, who roughed up Bont after the Dogs’ star dumped Brett Deledio in a ripping tackle that was called dangerous by the umpire.

Greene attacked – yes he did attack – Bontempelli as he was almost defenceless on the ground. Whether he gouged his eyes (inconclusive by looking at the footage and most probably debunked by the lack of reaction from Bont) is a matter for the tribunal, but I am pretty certain Greene will have to answer for the two handfuls of hair he grabbed as part of his “flying the flag” actions.

I’m sure much will be written about the incident over the next 24 hours, so I’ll allow others to opine as to what did, didn’t and should’ve happened in this case.

What I’d like to address is the weak response from the Bulldogs when their superstar (and yes, Bont is a genuine superstar of the game – there are not too many) was being targeted by the opposition. Did it expose a Western Bulldogs team with a very soft underbelly who are happy to carve teams up on the outside, but when the going gets tough they get going… as far away from the action as possible?

Who flew the flag for the Dogs when the Giants started to get stuck into their players? Who stood up and put one of the Giants on his backside to make a statement that they were not going to be pushed around? Matt Suckling, when he ran into a vulnerable Josh Kelly? It cost a goal. Rhylee West when he gave away a downfield free kick out of frustration in the third quarter? That also resulted in a goal. There is a time and a place to pick your spots… these were not the times, and they were certainly not the spots.

Where were the big bodied Bulldogs to meter out some retribution of their own in the clinches?

Sides have struggled to solve the riddle of the fleet-footed Dogs in the second half of the year, but credit must be given to Leon Cameron here – a former Dog whose coaching acumen has been questioned by many, particularly given the talent he’s had at his disposal over the course of his tenure with the Giants. He didn’t think the Dogs could, or would match it with the Giants physically.

And he was correct.

The targeting of Marcus Bontempelli, which has already been criticised by football purists, was a fine piece of coaching by Cameron, and enacted by not only Matt de Boer, who shouldered much of the load, but aided by each and every Giants player that came into Bont’s  vicinity. The team targeted Bontempelli – not just de  Boer, Greene and Himmelberg – everyone.

And the Dogs did not respond.

Bont had under 20 disposals once this season prior to the Elimination Final – that was against the Saints in Round 18 where he collected 19 touches. In a fine season, his 13-disposal effort in the biggest game of the year to date will leave a bitter aftertaste in his mouth. When the Dogs needed their star to stand up, Bont was sat on his backside.

And he got no help from teammates to stand up to those knocking him down.

I’ve loved watching the Bulldogs play in the second half of the season. Their run and carry, and their attacking brand of football produced some of the most scintillating end-to-end passages of the season, but when the running lanes were closed off and the team was forced to get down and in the trenches this weekend, too many Bulldogs weren’t willing to get their hands dirty.

And all of the Giants were.

Lachie Whitfield was laying big tackles. Nick Haynes fronted up with a fractured larynx (courtesy of Bont in R22 – do we think any of this was motivated by that? Even just a little?) and the midfield combination of Tim Taranto and Jacob Hopper showed the highly touted mids in red, white and blue that there would be no easy passage from clearances on this day.

Dunkley, Macrae and Bont all tackled well, but they were physically beaten by the Giants, and they were second to the footy too often.

The story of Toby Greene’s actions will be the big one over the next 24 hours. Opinions will bounce back and forth as to whether he will get multiple weeks or just a fine, but the other story emanating from this contest, and one that is being lost amongst all the grandstanding about Toby Greene, is of the Western Bulldogs and what they will do to counter what was exposed in week one of the 2019 finals.

Who will stand up for them and fly their flag when things start to get a little hairy next season? Who will throw their body into harm’s way to ensure taggers and every other player on the opposition team doesn’t crack into their superstar whenever he gets near the pill? Who will be the ones to make a physical statement of their own in 2020 and let every team know that the Dogs will not be pushed around?

Is it Mitch Wallis? Is it Tom Liberatore: blokes who were sadly on the sidelines for this contest? Or will Bailey Smith begin the journey from highly-talented rookie to inspirational leader?

Irrespective of who it is, the Dogs need more than just one player doing the hard yards when things get a little willing. They cannot allow themselves to be outmuscled and intimidated the way they were by a team they’d flogged just a month earlier.

In 2020, if they want to be a force, they need to get a little tougher and not just match the teams getting physical with them. They need to beat them down with some physical pressure of their own.

They wilted in the 2019 Elimination Final, and the cries from disgruntled Bulldogs supporters about dirty tactics and unsportsmanlike play are starting to sound a bit like the reactions most fans have when they get beaten. They’re whining.

The Dogs wilted under the harsh treatment of the Giants under the pressure of finals footy, and they need to make a stand against that in 2020.

They need to harden up.