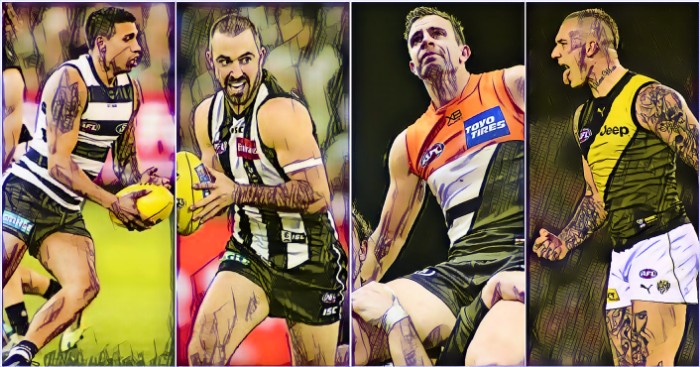 Ten Things I Learnt After Week One Of The Finals

1 – EIGHT TEAMS PLAYING OFF IN THE FINALS IS PROBABLY TOO MANY WITH THE EXCEPTION OF 2016.

So the Dogs came from seventh in 2016 and took it out. But aside from that, the impact had by the teams finishing seventh and eighth has been minimal. The weekend showed the massive gap between the Top Six sides and the Bulldogs and the Bombers. And to think there are some advocates talking about a final nine or more. No thanks. I reckon if it weren’t for 2016 it’d be time to drop back to a final six.

2 – TIM KELLY HAS PLAYED HIS LAST GAME AT GMHBA.

I can see that the AFL have scheduled the Geelong v West Coast game on Friday at the MCG. Fair enough too. Perth people will be here in droves to watch their Eagles, so once again the capacity at GMHBA wouldn’t have covered the West Coast fans willing to come over. I’d say there could be as many as 20,000 of them. As for Tim Kelly, he may even be playing his last game as a Cat against the side he will be with next year. I’m sure he’ll be out to impress, and it might help his side go deeper into September if he does.

The only word you could use to describe the Giants’ form in 2019 is indifferent. Good at times, but very ordinary a little too often when considering the talent on their list. So not many people saw this coming, especially not the Dogs. They were awesome. In fact, they will be making the Lions very nervous, and if Stephen Coniglio comes back in, the scales almost tip in their favour. They’ve won a final now which takes the pressure of Leon Cameron a little. Another win and it’s gone!

4 – GEELONG LOST THE GAME AT SELECTION.

Now, I’ve never coached at AFL level. In fact, I’ve never coached at Auskick level for that matter. But even a veritable coaching dunce like me would know not to go into a game facing arguably the best ruckman in the comp without a specialist in that role. And what’s more, Rhys Stanley made a very solid return to form against Matthew Kreuzer in Round 23, and the last time these two teams met he held his own very well against Grundy. So why wasn’t he selected? Chris Scott blamed it on the rain (that didn’t eventuate) in true Milli Vanilli style, and we all know they turned out to be imposters on the big stage…

You can always rely on this bloke to rise to the occasion of a finals match. Another lazy 33 possessions, with 15 marks, five tackles and a goal. He was the absolute standout best on ground player by a fair margin. All successful clubs need players who can play in the big games. He’s not the only one at the Pies, but if they go all the way, you can bet he’ll have a big say in it.

6 – DUSTY CAN WIN GAMES EVEN WHEN HE’S NOT ON THE BALL.

One could be forgiven for thinking that Dustin Martin plays his best football when playing in the middle. We all know he can kick a goal or two when playing forward, but with the opposition on-ball brigade boasting the likes of Neale and Zorko, it seemed a rather odd call to have Martin playing up forward, especially when you consider the presence of Lynch and Riewoldt. But anyone who was critical of the idea would be eating their words now when he chimed in with six straight goals from 14 touches and put the game beyond the wayward Lions on Saturday night. He was the difference, and if we weren’t aware already, he can dominate in any position.

7 – THE TERM “ACHILLES HEEL” WILL BE RENAMED “DELEDIO’S CALF”.

Whilst GWS had a terrific win, most of us would’ve been questioning the selection of Brett Deledio coming back from yet another calf injury. And, of course, the word is he injured it fairly early on and played on bravely knowing that this would probably be his last ever game of AFL football. This latest setback is his 31st calf issue unbelievably. That has to be some record. So, from this day forth, whenever we’re discussing someone’s weakness or vulnerability, it’s time we updated the term “Achille’s Heel” to “Deledio’s Calf” in honour of this great, yet somewhat unfortunate player. He hasn’t completely ruled out a comeback, but it would have to mean GWS win their way through to a Grand Final berth which is highly unlikely. I’d say his 274th game was his last…

8 – IT’S QUITE POSSIBLE THE TOP TWO TEAMS MIGHT GO OUT IN STRAIGHT SETS.

I imagine the West Coast Eagles will come over confident in their ability to defeat the Cats. If Nic Nat isn’t suspended, surely Stanley comes in? Will there still be more bleating from Chris Scott about the lack of a home final? Hopefully we’ve heard the end of that. As for the other semi-final in Brisbane, what would’ve seemed a certainty for the Lions two weeks ago is anything but now. They’re more than capable of victory, but will these last two losses to the Tigers scar them psychologically and reduce their confidence? On what we saw on the weekend, I’m on the Giants, but then again, I’ve backed them wrongly several times this year. Both games are a flip of the coin for mine, provided there’s no silly selections at Geelong.

Firstly, I’m very much against the pre-finals bye. I don’t know why it was brought in and if it has improved things. The first week of the finals since the introduction of the bye has seen more than the usual number of lacklustre games with one-sided results. And, once again, the curse of the bye has hit the Cats. How many more times does it need to happen before we believe that the curse is real?

10 – THE GAMES THIS WEEK WERE PRETTY BORING, UNLESS YOU SUPPORT THE WINNERS.

All four games were pretty much over by half time. Even in the Geelong game, whilst the margin seemed manageable, the Pies never looked out of control. Despite the Cats coming hard and only going down by ten points, the result was merely a formality as Collingwood had all the answers and composure when it counted. As for the other three games, the margins said it all. Here’s hoping for two crackers this week. And it would be a great shame to see the teams who finished one & two to be eliminated, but I sincerely hold grave fears for them. This week’s efforts were well below their best. I’m not writing them off (before all the haters come at me), but I’m wary of their prospects. Hopefully they make for better viewing next week.